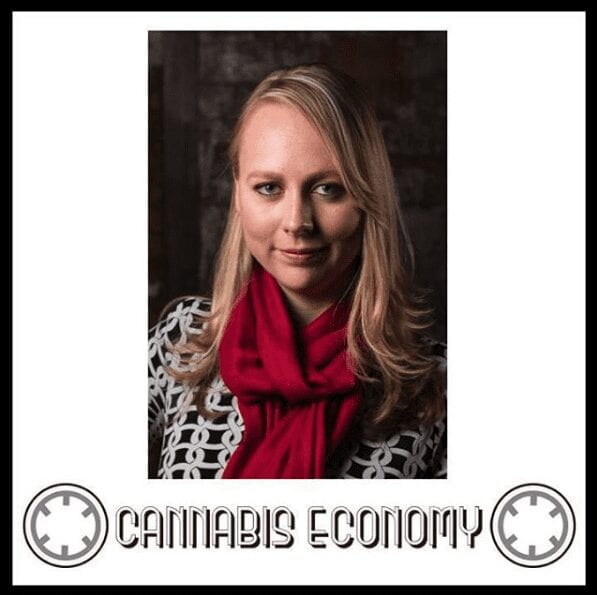 October 25, 2016
Jazmin Hupp joins us to discuss WomenGrow at a pivotal moment in the organization’s history. Jazmin shares her background in the theatre and how that experience served her well in building WomenGrow. The conversation with Jazmin took place at the CannabisWorldExpo in NY. But to get things started, we check in with Viv McPeak who for the 25th consecutive year is putting together Hempfest in Seattle.

Speaker 2: yes. That jasmine Hupp joins us to discuss women grow at a pivotal moment in the organization's history. Jasmine shares her background in the theater and how that experience served her well and building women grow up. Welcome to cannabis economy. I'm your host Seth Adler. Check us out on social with the handle can economy. That's two ends in the word economy. I should let you know the nominations for the third annual account awards are open. We've updated the regions, the categories, and the illustrious advisory board. The category itself is an actual sledge hammer with a three pound head and a three foot handle emblazoned with the cannabinoids logo. Nominate those deserving at [inaudible] dot com. The conversation with Jasmine took place at the cannabis World Expo in New York, but to get things started, we check in with Vivek Peak,

Speaker 1: who for the 25th consecutive years putting together hemp fest in Seattle. So bibs up first and then jasmine hot. Viv Mcpeak, Vivian Mcpeak. You might know him from hemp present, which, uh, is the long form version of a hemp fest. Is that fair?

Speaker 3: Uh, well, I guess, yeah, it's fair. Might not be accurate, but I certainly will.

Speaker 1: It's been going on for a long time. We've got a big anniversary coming up, so we'll talk about that in a second. But hemp present, hemp present is your, uh, what, what do you call it? A radio show

Speaker 3: because that is my crazy, crazy cyber internet radio show on canvas radio. Your source for the force of freedom where I expound linguistic verbiage, Tory aperture to stimulate the sensitive cerebral capacitor. You know, I just basically like to talk a bunch of Baloney. Um, and uh, and fortunately I get to meet with all kinds of people smarter than I am in my are huge, vast, luxurious virtual studio.

Speaker 1: Yeah, it's a, it's endless. Your studio. I've heard about it and congratulations on that.

Speaker 3: Thank you. Thank you. And I can hear you echoing through the halls right now.

Speaker 1: That's it. And you know, it is, uh, for, for guys like you and me. It is a, well, let's, let's call it reassuring that we get a chance to talk to people that are smarter than us. Right?

Speaker 3: Absolutely. I'm doing it right now. Atlanta. And so mine, doesn't that say enough? Well, you know, great minds think alike. So two ours occasionally. All right, so let, let's get down to brass tacks here. What the heck

Speaker 3: We've been on this crazy, a 25 year journey to justice, uh, with him fast and uh, you know, we have every year 120 bands as many about an equal number of speakers, guest speakers on six stages, 400 arts crafts, food information vendors, 100, one and a half miles long, right on the Seattle waterfront down there. Um, and so over the years, of course, 25 years, so 25th anniversary this year, we virtually had thousands of people and speak and millions of attendees come and celebrate and prove not only that we're a demonstration against the laws were also a demonstration of what the cannabis community and what cannabis enthusiasts are capable, capable of pulling off a year after year. So we've got another 25th anniversary coming this year with our huge symposium tent where we have 100 by 400 foot circus temp panel discussions and keynote speakers. Stuff like that. Big Vip Party on Friday night got all that going on this year and celebrating the victories that we've seen in the region over the last several years. And also trying to remind everybody that we're just getting started. I mean, they were really young. We, we've, we've seen some victories, but we're no way in any way, shape or done in the struggle for equality and, and, and, and of course building new emergence and growth industry.

Speaker 1: Yeah. No, uh, as far as not being done, we are far far from it, but as far as, uh, you know, that the hemp fests train, it keeps on chugging along. Um, there was a little bit of a Snafu or are we all over that? Uh, you know, I, I want to make sure that we do our best to, to throw support a hemp fests way if it needs it.

Speaker 3: Well, you know, it's, it's always a producing the seattle hemp fest is always equal parts, a leap of faith, act of love and call the action man. It's just, there's existential threats that every single year it just seems to never let up. And, you know, endless regulatory and permit battles and obstacles. And then of course the usual annual financial challenges it takes from a producing at $850,000 event with production tag 18, 850 grand. But it's free event to attend to the public. So we've employed all of our business acumens degenerate revenue from a very, a variety of sources including a seller spaces. Sponsorships, attended contribution's memberships to sell with web and event program adds raffles, merchandising of all kinds. And of course we operate a small boutique and head shop in Lake City area of Seattle. But the costs keep rising and hemp test a operates on razor thin, two percent profit margin.