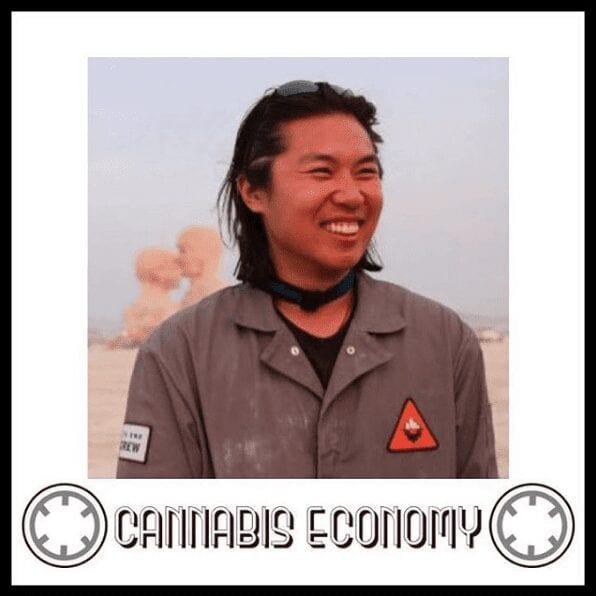 October 28, 2016
David Hua first joins us to discuss his journey with Meadow. Jaime Lewis then returns to discuss her new role with NCIA and what she’s doing with CRCR. Two executives doing very different things of equal importance in this next great American industry. David Hua then Jaime Lewis. Enjoy

Speaker 3: go. Cannabis economy. That's right. It's David who was enough. Hello? Yeah. Oh good. Yeah, it was better upfront, you know, it was better clothes. You want to treat it as a loved one is really what you want to do. Okay, cool. Did I pronounce who were right? Who is great? Yeah. Where's that? Where's that come from? In the world? Chinese. Vietnamese. Okay, good. Excellent. But you were born here, grew up here, the whole thing. Oh yeah, yeah. Uh, born in Philadelphia and grew up in Philadelphia, but moved out to the bay area in 2007. So it's been a while that you've been here, but you were in Philadelphia for long enough to be a phillies fan or a flyers or an eagles fan. Yeah. It's kind of mandatory. Yeah. Or 76 ers fan. Yeah, six years. Do you remember? I. You don't? Yeah. You remember Ai?

Speaker 3: You don't remember Dr Jay? I do not remain a doctor that's too far back. Ai? Yeah. Do you remember playing Cunningham Randall Cunningham that for Randall Cunningham was probably the greatest athlete that I had ever seen at the time. Dance man. He played, uh, my giants and beat it. Seemed like they want all the time. It was the first, uh, my first brush with a little bit of Flash, a little bit of bling. What Randall Cunningham did. He was a Russian quarterback and he had gold. I'm shoelace like, like, uh, the top of your shoelace, whatever that's called. Yeah. It's usually plastic is where gold. Yeah, I mean, yeah, he deserved it is your point. Yeah. I mean we just wish we had more all stars to support him. He did everything. He was almost like a Michael Vick. Right. Like we're before Michael Vick was there, right? That's exactly right.

Speaker 3: He's Michael Vick before Michael Vick. And you did have reggie white on defense, but that was a bad gig. That's where I got what? A tank. But I don't think she'll walker. Well for a minute. I know for a minute, but you know, we had Herschel Walker and he was a beast too, but I don't, I don't think we're here to talk about. No, no sports. Yeah. So, so meadow, you know, when folks used to talk about meadow, they used to talk about delivery. Now when folks talk about meadow, they talk about patients and doctors. Yeah, so give us the overview of, of where we are in the life of meadow here in the middle of 2016. Okay. So we, we're trying to build the best technology within the cannabis industry. That's kind of our mission right now and or trying to focus on is really building up to the farmer.

Speaker 3: We started with the last mile on the delivery side and that's been going really well. We've been able to solve a ton of problems for delivery of services in terms of compliance, inventory management, patient facing. I'm ordering systems, patient verification, a encryption on their documents, all that stuff. And more recently we moved into building software for brick and mortar, dispensary's retail and they have a whole different set of challenges. Right? Right. A lot of it is ensuring that the speed of which people are coming through and being taken care of, is there a. The efficiencies are from the bud tender and the intake person a is taken care of and then we also have issues where people are looking for evaluation. So we also have the doctor service called meadow md that allows patients to do a telemedicine option with doctors are very well versed in cannabis and how it can help a myriad of diseases.

Speaker 3: I mean you can or conditions, uh, in our doctors know anything from, you know, talking about birds or a, what's a gerd it gastrointestinal problem. Oh, thank you. I'm crones, fibromyalgia, migraines. We have hospice patients, we have veterans with PTSD. It's all across the map now. So we're trying to build a platform that anybody within the, the industry, uh, or the movement can kind of plug into and work with to just run their operations, run whatever they need to run basically. But also like, you know, focusing on the compliance pieces where they don't have to worry about it. A lot of that's been built in, into the experience. So within the industry, kind of whenever David's name is mentioned or meadows name is mentioned, it is followed directly by y combinator. Really? That's what I, that's what my experiences are. Legit vc it way better.

Speaker 3: Excuse me, accelerate. It's a bunch of things. Incubator, accelerator, accelerator. I'm not a finance guy, so that's, you know, that tells you what, uh, what you need to know about me. Amazing beard. That's right. That's. I am a, I am bearded. I can see it. I can't, you are not bearded. No, I have zero facial hair. But um, you know, it's, it's a legit operation. It is not a cannabis specific, a place for anybody that knows that silicon valley. So, you know, I haven't expressed interest in wanting to know how that relationship began. Um, if they knew that your interest was in the cannabis space or refute we're just building, you know, technology and uh, you know, along with that how happy they are with the way things are going. So on the way in who, who, how did that relationship come to be? Yeah, I mean, when I first moved out to California in 2007, I would love to have been in y combinator.