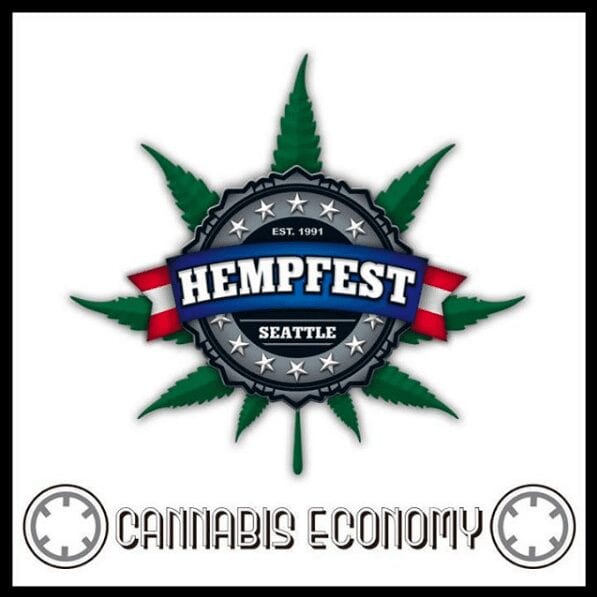 Viv McPeak kicks us off by sharing the difference between Hempfest 25 and Hempfest 1 as well as all that goes in to producing the inimitable event. We then have a cavalcade of guests including acclaimed actor Eric Roberts, of the Emery’s Jodie Emery, of the endocannabinoid system, Dr. Bob Melamede, state house candidate Stephanie Viscovvich, Chief Greenleaf  and THE Ed Rosenberg. We finish the episode by sitting down with John Davis who is name checked quite often when we speak of Washington state so it was great to get a chance to say hello and hear what’s on his mind at this moment in time.

Our second hemp fest episode. Enjoy. Is that

Speaker 1: just finished? My brain is. That's it. And you want to go right in there? Oh yeah. See? And that better. All right. Okay. So I'm still going to be louder than you, but that's a, that's the first. That's the guy. That's what. God, I get back up there. I'll be louder than you. Yeah, sure. I mean, so here's Viv mcpeak at. We're at Heb Fest is the 25th anniversary. Have best happy anniversary. Thank you sir. Thank you for having me. My pleasure. Seth. This is only my second hand fast. This is your 25th hemp fests. Correct. Um, congratulations on getting here. How much different was a hemp fest to hemp fest? Twenty five. We know the first hemp fest was at volunteer park here in Seattle, aptly named, uh, and we had Jack Hare spoke at the first one. He spoke, he spoke at every hemp fest except the year he got a stroke until he passed away.

Speaker 1: Um, and uh, we were throwing joints out from the stage. We had live plants on the stage and that was the grunge days, right? It was at its height, uh, in [inaudible] 91. So all the bands were kind of grunge bands, all the whole crowd of like 500 people and we thought, dude, 500 people. It's huge. They all had long hair and wearing black leather jackets, you know, and flannel shirts, you know, and in the summer and cutoffs and stuff. Um, they look like they're all members of Pearl Jam. Sure. Uh, and, and people were blown away. I mean, you know, when we showed up at volunteer park in the morning, we look concerned because there's more homeless people than usual sleeping in the park. As the sun came up, we set up the Ph and we found that they weren't homeless that come from other cities and some from a few other states to be at this crazy hemp best thing.

Speaker 1: We're like, wow, maybe we're onto something. There you go. Um, and it's, we haven't stopped since then. We've been every single year for 25 years. We've been raging without stopping work all year on it. I know you do and it takes a lot. Uh, we're going to get into, um, you know, the money that it takes at the back end of this, um, but you know, as far as, I mean, how many vendors, how many speakers, you know, that, that type of stuff. Yeah. We've got six stages across the one and a half mile of waterfront expanse here in three of Seattle's most beautiful downtown parks, right on the puget sound with the Mt. Rainier and view in space needle road over there. Um, six stages. One hundred and 20 bands. One hundred 20 speakers, 400 arts crafts, food informational vendors will fill a thousand volunteer staff shirts over the weekend on 118 volunteer crews with 100,000 plus attendees.

Speaker 1: Amazing. 100,000 dollars from 500. Yeah, that's a, that's called expansion, right? That's called growth. There is a growth curve that is taking place here. Growth curve. Now you're also, you have a medical card here in. I was a medical marijuana patient for many years. I helped pass [inaudible] 92 in 1998, but I five five. Oh, two came in and then our legislature passes a 50 50 to bill, uh, and another one, a 20 something $28, 50 slash 52 is the one that we want to talk in 50 slash 52. Basically killed medical marijuana in our state have destroyed it and they shut down a hundreds of dispensaries on July third, I think of this month, July first this year, uh, hundreds of dispensaries got shuttered, I think only three or four of them, but I know transferred over to rick stores. Um, and it's, it's, and so I no longer am a medical marijuana patient.

Speaker 1: My doctor and this new law can't even write me a mech medical recommendation because they have a medical in the new program is what they like to say at what their version of it. So talk about that. What do you, what do you think and feel here? Well, my doctor is in spokane now and I can't see them on a regular basis. Um, and, and this, they've made it really complicated, you know, and if you're a medical marijuana patient, we used to be able to grow a 15 plants, now it's down to three plants, I think it is English, you are in the registry and then you can have a few more plants. We don't think there should be a registry. Uh, you know, you don't have to be in a registry to get pharmaceutical drugs or cigarettes. No cigarettes exactly or alcohol. Exactly. Um, and, and so they limited the plant count, they limited the amount of pot you could have way, way down from where we had it fixed.

Speaker 1: They basically fixed something that wasn't broken in any way. They fix something. It was, that was working and they broke it saying that they're fixing something broken because the state legislature doesn't get it and they're about the tax revenue. You shouldn't be taxed for medical marijuana. I don't think it'd be taxed or any medicine. Um, so yeah, so it's been really challenging. Uh, we took two steps forward and one step backward. You know, I, I personally didn't support I five fiber two, but it's done a lot of good. I cannot deny. Well, I mean you can go and work and drive up to a brick and mortar store right now in Washington state and you can buy some nugs and you can get in your car with a half pounds in each pocket, drive away and as long as you don't get pulled over and your blood tested for five Nanogram Dui, which is completely unscientific, you'll be fine.

Speaker 1: Um, so that's, that's huge man. I mean it's, it's big being able to go to a store and buy some marijuana. Wow. But we shouldn't have to sacrifice medical marijuana do that and we should have home grow and we shouldn't have an arbitrary and unscientific dui level of five nanograms blood level, which doesn't indicate impairment in any way, shape or form. They don't even have to prove you're impaired at all. It's just a technical, oh, he's five nanograms convicted Dui. So you don't see, um, because I'm, I'm stuck on this medical thing because that's the thing that just happened. You don't see this new program as proper medical marijuana? Well, no, not at all. First of all, the recreational stores don't necessarily have all of the strains and the oils and stuff that, that the dispensary's did, so people can, can have the right strain, you know, uh, for, to treat their dravet syndrome where their epilepsy or their cancer or whatever they're mounting their brainstem glioma and whatever it is that marijuana is amazingly, uh, effective, uh, at, at a soothing treating, treating the symptoms of.

Speaker 1: And if not, you know, I just interviewed a woman on my show, a cannabis radio, him present, uh, a woman who had a, a deadly brainstem glioma. They gave her months delivery at six children. They said you're gonna die. They had on 23 pharmaceutical drugs. She gained 200 pounds. And this guy told her, have tried cannabis oil. She started taking cannabis oil. And guess what? Her Brainstem Glioma hurt. Her interoperable tumor started shrinking on the Mris. She quit all the pharmaceutical drugs lost all that excess weight and procedures are controlled. And now her Glioma doesn't show up on an MRI. And she was considered to be healed and you know what she did last week? She moved from Washington to Oregon. She left two of her kids behind or tuber oldest kids with her husband and moved to Oregon where she gets to save her freaking life.

Speaker 1: Countless ref where she could get yes. Medical where they actually have medical marijuana is still intact. It's crazy. Yeah. But it, that is a evidence that there is legal marijuana, right? There is legal cannabis. Illegal means different things to different people. Uh, you know, playing with a game of semantics here and you know, cigarettes are legal and just go to the store and you buy them. You don't have to sign some registry or something like that, you know, alcohol. The same thing if you're, if you're 21, you go and you buy some alcohol, man, it's not a problem. You can brew it in your home here in Washington state. You can make it, you can't grow your own pot. So you know, it's decriminalized. I'd say it's in packets. Commoditized. Okay. What I'm getting at are the 25 points of, of Ham fest, right? We're not going to go through all 25, but as far as we know, I hear this all the time.

Speaker 1: Vivian, now, why haven't hemp fest, right? I mean, is it just you're obsolete, right? I mean, is it even relevant, even relevant? You know what I mean? Pot's legal, right? There's that pot legal thing again. Right? And so pot's not legal is federally illegal. The next president, God forbid who it might be, it makes me, it keeps me up at night, uh, could just make it all go away in five days. It could be no legal pot anywhere. They can shut down everything, take them about a week. Um, and that could really happen. Uh, and it's federally illegal, which means, you know, uh, and like I said, they can shut it down. There's people being busted right now all across America that the red lights behind them, their door's being kicked in, uh, and uh, it's all going to change for them. And they may lose everything.