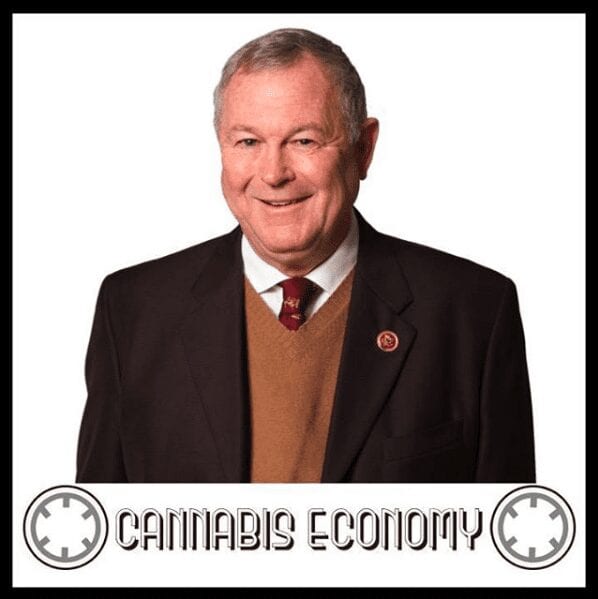 Recorded March 2nd, US Congressman Dana Rohrabacher returns to share that we see the same societal impact from making cannabis illegal that we saw by making alcohol illegal- it was harmful to our country then as it is now. Representative Rohrabacher notes that he’s interested in inviting AG Sessions in for a discussion with the Cannabis Caucus. He goes on to share where he and his congressional colleagues are with current and future federal legislation including his Respect States Marijuana Laws. Just like Congressmen Blumenauer and Perlmutter did, Congressman Rohrabacher urges us- we the people- especially veterans, religious leaders and seniors- to visit our elected representatives in support of cannabis.

Speaker 2: us. Congressman dana rohrabacher recorded march, second us congressman dana, rebecca returns to share that we see the same societal impact for making cannabis illegal that we saw by making alcohol illegal. It was harmful to our country then as it is now representative or broker, notes that he's interested in inviting age sessions in for discussion with the cannabis caucus. He goes on to share where he and his congressional colleagues are with current and future federal legislation, including his respect states, marijuana laws. Just like congressman blumenauer and pearl motor did, congressmen were backer urges us. We the people, especially veterans, religious leaders and seniors to visit our elected representatives in support of cannabis. Welcome to cannabis economy. I'm your host seth adler. Check us out on social with the handycam economy. That's two ends on the word economy. Congressman dana rohrabacher,

Speaker 1: cannabis economy you've been on before, we call it a realtime history, illegal cannabis, and so you're. You got something to do with that congressman. Yeah, I think I recognized, I think I recognized at an early age how stupid it was to have policemen running around a, focusing their attention on people who were not hurting someone else when all kinds of people were being raped and murdered and horrible crime. Laser is sweeping the country and then we're interested in stopping them. People from smoking a weed in their backyard. What a waste of time and money. It doesn't make sense. I'll just. We don't have a ton of time, so I'm just going to go directly to, you know, I'm a secretary. Sessions just kind of mentioned two things in relation to cannabis, which I know you know better. It's relation to opioids. Of course there is none.

Speaker 1: It's relation to violence. Of course there are. There is a relationship to the opiate. Okay. Tell. Tell me how coarse it is. A fact is if we make marijuana illegal and we make research into the medicinal purposes of marijuana, we're going to end up giving opiates to our veterans and everybody else. There you have. It is just the opposite from these people who want to have a prohibition on cannabis. No, it's actually going to lead to more people using opiates and are so harmful, so harmful to other human beings. Absolutely. And then as far as, uh, the violence, obviously if we take the cartels out, that decreases the violence. WhaT else would jad there? Well, what we've got now by making a marijuana illegal, uh, is the same societal impact is when we tried to make alcohol illegal. Uh, what happened was it the fact that people were drinking.

Speaker 1: Now it can be said that people who drink actually are much more violent than people who smoke marijuana. It can be set. So you gotta ask the police and the police will always tell you they'd rather go to a building where the music is too high and they so and smells marijuana versus trying to crash into a party where people are being wild and crazy because they're all drunk without question. The so, so number one, you do have a less violence with, with a marijuana type of consumption on recreational things as long as we're talking about adults, but what, no matter who it is, uh, by making it illegal, we have then transferred, uh, a source of money, uh, to the drug cartels in prohibition. It's really gave tHat money to people like al capone who corrupted chicago and, and other, uh, you know, absolutely violent gang members, uh, and that we didn't need to do that.