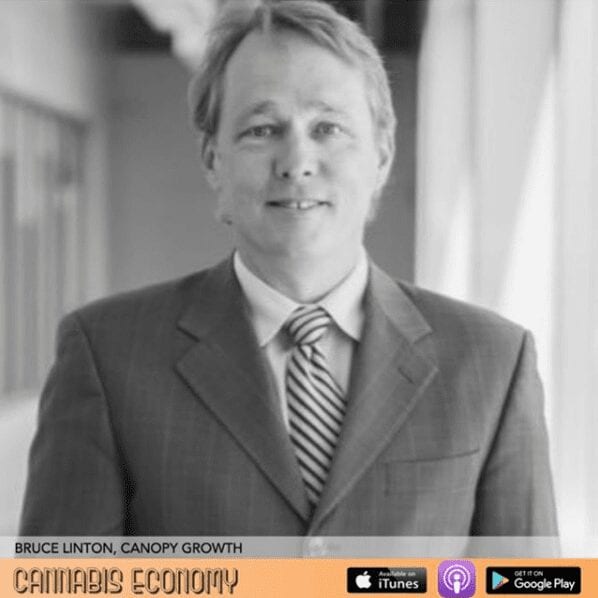 Running the largest cannabis producer on earth that publishes the address, Bruce Linton joins us to discuss his global operation. Canopy is of course in Canada but also does business in Germany, the Netherlands, Brazil, and Australia. Ireland, Italy, the Czech Republic, South Africa and Poland are all opening up per Bruce. Based on his global presence, he provides his thoughts on what’s happening here in the US as well. And of course when compared with all of those federal cannabis operations, the United States is simply falling behind the rest of the world…and as Bruce says, the US is the opposite. What brought him to medical cannabis to begin with is the fact that Canada was treating cannabis as simple and straightforward public policy. And of course they’re moving to adult-use next.

Speaker 2: fresh off the constellation brands deal. Bruce lit and joins us and shares that. One of the things that he has to do is look at other sectors, so he's been watching alcohol, tobacco and foremost, looking at structures and public statements. The only company in the alcohol space that seemed to be forecasting and interest in cannabis was constellation. Bruce and his team reached out to figure out how to make it happen and found a company with an entrepreneurial spirit with a like minded approach for his part. Bruce sees the producer of corona beer as a beverage manufacturer. He notes that whenever and wherever there's a market for nonmedical cannabis beverages anywhere in the world, constellation is with whom canopy growth will be working. Welcome to cannabis economy. I'm your host Seth Adler. Check us out on social with the American economy. It's two ends of the word economy. Fruitland. Why is there no lotion?

Speaker 1: Uh, at least to have no. See if we will. And a nice breeze. What is going on? Why can't you fix your studio? I know, I mean, we're in the back of the room where you are going to be in the front of the room at Mj Blizzcon in Vegas, which is very different than for a concrete slab outside the, uh, the hall in Tel Aviv. That was very pleasant. It was better. But, you know, listen, now we gotta take you where we can get you, you know, you're making deals that, uh, are, are, are raising eyebrows. Bruce writes this morning, did you see the one we got greenhouse a and organic are part of our world up in Canada now are partnered into be producers with the only place you'll be able to get their product in Canada is the tweet main street and they're going to actually have their genetics coming over and working with us, uh, on, on one our sites where they're going to essentially be a partner because we've made a joint venture.

Speaker 1: I do love making joint ventures in this sector. This sector just seems so appropriate. It makes sense. Some, uh, I think they found that the strain hunters found a new place and, and it's, uh, it turns out that it's kind of big earth of course. Yeah. So, um, you know that. So congratulations on that. Yeah, I think that as far as constellation brands who obviously produces corona, uh, what was so interesting about that? Uh, well there are also many things but the fact that alcohol is part of this, right? So, um, where, you know, how much can you tell us, where did this conversation begin, you know, and, and how did it progress? Well, um, so you know, when one of the things you have to do is look at other sectors. So we've been watching alcohol, we've been watching tobacco, we've been watching Pharma and we've been looking at structures and we've been looking at public statements and the only company that actually seemed to be of the view that this is going to happen and we should be focused on how do we make it happen to be part of it in the alcohol sector was constellation and there were public record statements by their CEO that made us watch them very closely.