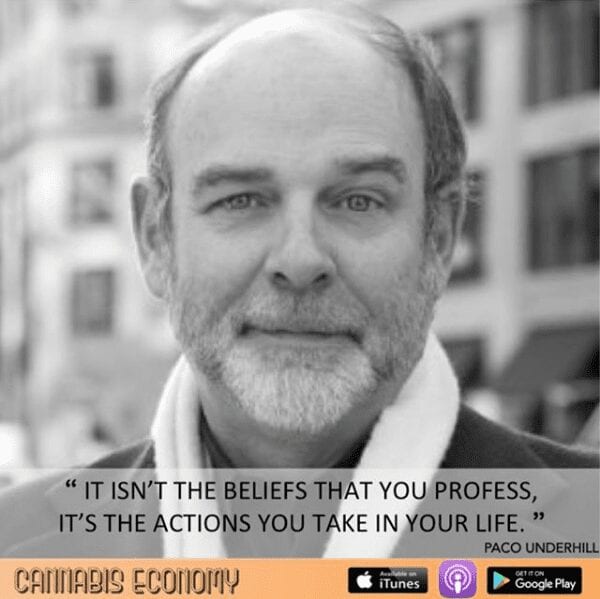 Celebrated Author, Paco Underhill joins us to share that when he was doing research for commercial zoning issues for cities on the roof of the SeaFirst Bank building in Seattle he had an epiphany. He would do for merchants of any kind what he was doing for cities- helping them understand what customers were doing in their respective establishments and sharing what the merchants could do to improve their customer’s experience. He literally wrote the book on it- “Why We Buy,” which came from an article that Malcolm Gladwell wrote about Paco for the New Yorker. Paco discusses how he goes about helping merchants providing some insight on what drives customers and how that’s changed over the years. And finally, we discuss his passion which is helping with homelessness through Urban Pathways.

Speaker 1: Paco underhill, celebrated author Paco Underill joins us to share that when he was doing research for commercial zoning issues for cities on the roof of the seafirst bank building in Seattle. He had an epiphany he would do for merchants of any kind, but he was doing for cities, helping them understand what customers were doing in their respective establishments and sharing what the merchants could do to improve their customer's experience. He literally wrote the book on it, why we buy, which came from an article that Malcolm Gladwell wrote about Pako, where the New Yorker pocket discusses how he goes about helping merchants, providing some insight on what drives customers and how that's changed over the years. And finally we discussed his passion, which is helping with homelessness through urban pathways. Welcome to cannabis academy. I'm your host Seth Adler. Check us out on social with the handle can economy. That's two ends in the world economy. Pako underhill. What way

Speaker 3: is there to introduce you other than your name? Pockle underhill. I sometimes intra introduced myself, seth as a refugee from the world of Aca demia that some 30 plus years ago, I was a poor part time adjunct instructor in a doctoral program in environmental psychology here at City University in New York City. After teaching a terrible seminar, I decided I felt the same way about teaching as I do about sex, which is that I'd rather practice my profession than talk about practicing my profession. I see. I see. I was wondering where you were going to go with that and I'm. We had a nice safe landing. There is. It's what happened. So you rather than talk about it, you want it to do it. And so then what did you do? My, my specialty 30 years ago was doing the research that would look at commercial zoning issues for different cities based on their top graphy.

Speaker 3: Okay. And I had my moment of epiphany on the roof of the seafirst bank building in Seattle where 60 floors up. I was installing the timelapse cameras to record the traffic patterns on the street. Speed low was A. I'm a Seattle morning and there was a stiff wind blowing and I could feel the building rocking in the breeze up 60 floors up. The bright sunshine, somewhat unsettling, I would imagine. I realized then I'd be rather swimming and Parana infested rivers than doing the job that I did. I'm a tall guy, but I really don't like heights. And I promised myself then that I would reinvent my profession. Now if I'm doing the math correctly, I'm pretty sure that this is after a reinvention from years back. So we found you in this interview as an adjunct professor, but before that wasn't there a nightclub business, you know, I came to New York City and um, through circumstances beyond my control here, I did have a role in nightclubs.

Speaker 3: I was one of the first owners of the ear in known to many music aficionados in downtown New York City. It's a, it's a compartment of my life that I enjoyed while I was there. But I was very happy to close the doors. I just feel like we have to ta. I mean, you, you would. John Lennon was around and so I feel like we should write at least mention it. Well, uh, there's a story that I tell that, uh, you know, courtesy of Yoko Ono, um, who, uh, knew one of my partners in one of the nightclub businesses and we were at a picnic at her house up in Rockland, Rockland County, John and Yoko and Julian were there. And after lunch I went to John, I said, a bunch of us are going to walk up the creek and go to this, this waterfall, we now and take a swim. And John said, well, I don't have a bathing costume. And I turned to him and said, neither do we. So what? I don't know whether that's a peculiar de extinction, but having led John Lennon to his first skinny dip here.

Speaker 4: I feel like, yeah, it should be mentioned if we're going to talk about. Well, you know, what, where you've been and what you've done. Right. Well, uh, thanks seth. But I, uh, I hope there are other things that go onto my tombstone. So let's get into that. So you're standing on a, the Scitech, a tower or a tower and realizing you're not going to do that anymore. And so I guess when did you find the pen, right? Because these books that you've written. Okay, well,

Speaker 3: about, um, six weeks ago I was cleaning out a corner of one of my drawers and found a very nice rejection letter from the Minnesota quarterly for a short story that I had been admitted as a junior in, in college as, as a junior in college. I had probably 20 rejection letters and some of them very nice letters from the New Yorker saying we really enjoyed your story. It made it past a number of cuts. But if one person had accepted a story back then, I would've probably been a writer. Um, so the act of turning out written copy has been something that's been part of my character for a long time. And the fact that it eventually got to be books here is a testament to a typical trajectory. But I had to do a number of other things first before I got the platform to be able to get a publisher to say we want your books.

Speaker 3: Right. Understood. So what did you do when you climbed down from the tower there? We, a week after that experience on the roof of the seafirst bank. I was standing in a bank in New York City and I was frustrated standing in line and realized that the same tools that I'd been using to look at how a city works, I could take inside a bank or a store or an airport or a museum and start to dissect how those work. It took me almost 10 years from that point. I owned some, some, some bars and restaurants. We were part of the music in history. And One night I was at the, at the bar with the director of marketing to epic records. And I said, I can do a deconstructive, a record store in a way that's going to help you be able to sell music. And um, the guys name I think was Dan Beck and he said, why don't you write something up to me? Okay. So I wrote something up. I said my dad did it and I didn't hear anything for months. And then out of the blue somebody calls and says in our files, we found this proposal and we'd like to do it.

Speaker 3: And so I made my paragraph initiatives voyage out to Palisades Plaza here, Palisades Park in New Jersey to a, to a music store and set up my cameras there and brought some students in to help me look at how people move through it and came up with a series of often some painfully simple stuff about how to make that store function better. So painfully simple being what? What are we talking about for? For example, we have images in our time lapse of the shoppers for singles. Back then, this was back in the back in the eighties. I remember we're still 45 and bought a region Franklin's respect yet the, the billboard top 100 chart put next to the single section at a comfortable height for an 18 year old to read because that's who it put the sign up as opposed to the 12 year old that was actually buying the records.

Speaker 3: Got It. And my thesis was, is if you put the sign at the right height, you will be able to generate more sales. Simple, pure and simple, right? Second piece was, um, at that point people sold cassettes and albums and yet the number of people shopping albums was almost four times the number of people shopping cassettes because it was a easier meet medium to be able to look for something as short. And yet the sales of albums and cassettes were the same. So we proposed a series of ways of being able to reorganize the section to be able to, uh, reorganize the store to be able to even out the traffic across the floor. Yeah. Third thing is that my cameras caught a shoplifter at work. Part of the reason why I knew he was pro as he was getting multiple copies of the same record.