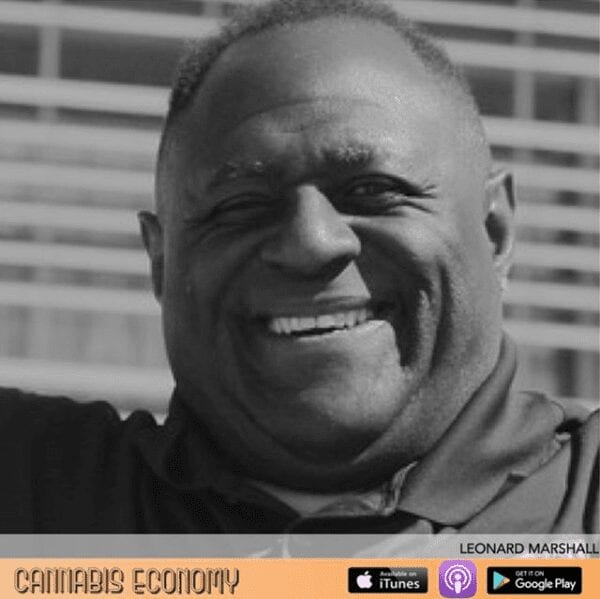 Two time Super Bowl champion and organ donor Leonard Marshall returns to share his thinking behind donating his brain to CTE research. He says that he thought about the lives that could change and he thought about his father. He says he wanted to do something with his own life that his father couldn’t do with his. Leonard shares that he is a child of segregation and that he initially could not use the same bathroom or play in the same playground as white people in the south. And so, he’s interested in making a difference not based on his race, color, creed or nation of origin but make a difference as a man and empower the will of parents on their children to open up a mindset around traumatic brain injury and head trauma.

Speaker 1: Leonard Marshall Returns to times Super Bowl champion organ donor Leonard Marshall Returns to share his thinking behind donating his brain to cte research. He says that he thought about the lives that could change and you thought about his father. He says he wanted to do something with his own life that his father couldn't do with his lender chairs, that he's a child of segregation and that he initially could not use the same bathroom or play in the same playground as white people in the south. And so he's interested in making a difference, not based on his race, color, creed, or nation of origin, but make a difference as a man and empower the. We'll have parents on their children to open up a mindset around traumatic brain injury and head trauma. Welcome to cannabis economy. I'm your host Seth Adler. Check us out on social with the handle can economy. That's two ends and the word economy. Leonard Marshall. So you've done because I don't know you that well, but I. I

Speaker 2: did last year we talked, which means you've done two things twice. One is win a superbowl and speak to me. That's true. There you go. That's true. That's true. So welcome back. Thank you. All right. The big news right is this donation thing, you know, it was big news is yesterday's news now, but it was big news but not for me. And I'll tell you why. Okay. You're putting your money if you will, or your money maker in this case where your mouth is. That's true. So how did this come up if, if you, if you allow it, how did this come to be where you said, you know what I'm going to do? I'm actually going to donate my brain for cte research. Well, I thought about the process involved with the brain donation and what

Speaker 3: lives it could change and the fact that, you know, I had such a, such a success in athletics that a part of my legacy and the legacy of my father would be the lead behind things that he couldn't and things that he couldn't do with his life that I could do with mines. You know, I'm a child of segregation. So up until 1967, 68, I couldn't use the same bathroom with you in the south. I couldn't play in the same playground with you in the south. So now that I'm able to make a difference, not because of my race, color, creed, or nation of origin, um, I can now make a difference as a man and I can empower the, we'll have parents upon their children to open up the mindset. Will young people think about when it comes to traumatic brain injury and head trauma as well as some of the other illnesses associated with playing tackle football at an early age.

Speaker 3: So the biggest misnomer, I think, to parents that put their kids in these programs is not knowing who's going to coach, train and teach their kid how to play tackle football between the ages of eight and 12 years old. It's imperative that they know that that guy is not something Monday morning quarterback or some guy that had an ax to grind because he didn't play professionally and he wants to use their kid to get that euphoric feeling that you get for me, the winning championships, winning superbowls playing and suppose are saying I've been there and done that. So I think that is, that is something that needs to be accounted for and, and be to be taken in terms of inventory when it comes alive of America's youth. Uh, we talked about coaching last, correct? Correct. So, so, like that, you know, that's the reason why I decided to donate my brain.

Speaker 3: I got Ya. But you know, understanding that we spoke about coaching last time, talked about coach parcells talks about what works, what doesn't work. Talked about the fact that he treated you guys like men, right? If I'm a parent and my kid really wants to play football and it's a little kid, you know, eight to 12, and she said, what should I be looking for in a coach? You know, you said the general, you know, make sure he's not trying to live vicariously through your kid. I should look, I should look at his certification. Yup. I should look at where he was trained. He was trained and the integrity he represents both on and off the practice field as well as the organization that he's involved with. If a guy comes from USA football, NFL certified, it becomes from offense defense, football, you know, he's an nfl certified.

Speaker 3: Okay. Uh, in most cases that he played the game and he played the game current to these times, you know, he had some sort of formal certification behind them. So because he knows what's happening on the guy to watch out for is the guy who never really did it. There you go. And who has that ax to grind or has that chip on his shoulder more or less what? He's vicariously trying to live his life through somebody else's child. Let me throw something out of left field to go ahead. Was watching Jesse Ventura speak. We got a chance to talk to him. He said, you know, the brain injuries will go down if you take the helmet's off, if you make them play with no helmets. What do you think? There's a wwe is something crazy with the. He mentioned rugby. They don't have any pads and helmets.

Speaker 3: Well, why is that misguided? That's extremely misguided. I'll say, well, the NFL players getting bigger, faster, stronger every year, right? I mean, if you look at football now, when I came into game mid, thought I was too damn big. Okay, good old bill parcell is made. These jokes about me being six foot three and 290 pounds and having a way me on the New Jersey Turnpike, these defensive tackles now at 3:50, if you're not three slash 15 plan d tackle in the NFL, you shouldn't be in the league. You're saying you used to be huge. Now you're tiny, tiny compared to, to, to, to today's play. That's it. I mean, uh, you know, I, I can think of names. I mean, uh, you know, Ted Washington, you know, uh, Jerry Ball. I mean, I get Michael Dean, Perry, William the fridge, Perry, right. Get on tons of guys that played during my era.