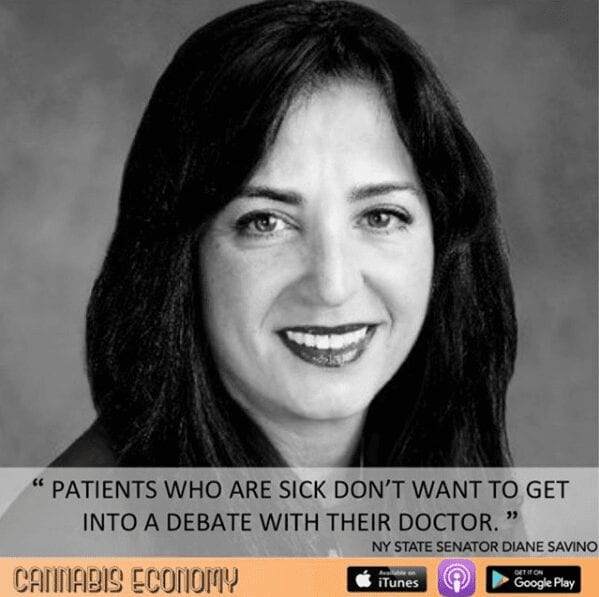 New York State Senator Diane Savino joins us and share her thoughts on the New York Cannabis program. Her thoughts are, it’s going. She notes that it had a slow start but that it was designed be tightly controlled and highly regulated and that it’s lived up to that reputation. Regarding the Department of Health and the Commissioner of Health- Diane shares that they’ve been very responsive to changes as changes have been proposed because they recognize this is a health issue. She doesn’t pull punches- could more be done, absolutely- her biggest concern continues to be lack of participation among doctors. It’s not possible to visit every doctor in the state and convincing each efficacy of medical cannabis. So to that end, no matter where you live, consider this a public service announcement to tell your doctor about medical cannabis.

Speaker 1: state Senator Diane Savino returns New York State Senator Diane Savino, returns and sheriffs or thoughts on the New York cannabis program. She knows that it's had a slow start, but it was designed to be tightly controlled and highly regulated and that it's lived up to that reputation regarding the Department of Health. The senator shares that they've been very responsive to changes as changes have been proposed because they recognize this as a health issue. She doesn't pull punches more, could be done. Her biggest concern continues to be the lack of participation among doctors. It's not possible to visit every doctor in the state and convince each of the efficacy of medical cannabis, so to that end, no matter where you live, considered this a public service announcement to tell your doctor about medical cannabis. Welcome to cannabis economy on your host Seth Adler. Check us out on social with a hammock. Can economy that's two ends and the word economy, state Senator Diane Savino. And so

Speaker 2: Diane Savino one more time. How are you? I'm fine. How are you? I'm doing all right. We, you know, have been in Vancouver together. We've been in your office together and now we're at this conference, the javits center at the javits center together. Even so I guess, you know, I'll ask with. I'll start with a nice broad question. Your thoughts on how the cannabis program is going in New York. Well, it's, it's going to, it was a slow start, but you know, the one thing I will say about the New York program, it was designed to be tightly controlled and highly regulated and it certainly lived up to that reputation of anybody who's in the industry here. And you know, the one thing though I will say about the Department of Health and the Commissioner of Health, they've been very responsive to changes as they've been proposed because I think they recognize that we're dealing with people's health, but could we do more?

Speaker 2: Absolutely. Our biggest concern continues to be the lack of participation among doctors. Yeah. Uh, and I, you know, short of visiting every doctor in the state and convincing them of the efficacy of medical marijuana, I'm kind of at my wits end, so I'm hoping like events like this where we begin to normalize marijuana in the public domain and people see that you can have a convention where you see the industry president and you see elected officials and you see news, the news industry here in UC policymakers and you see the business world. Doctors may say, Hey, you know what, maybe I don't have to worry so much about, uh, you know, these fake concerns about medical marijuana. But that really has been the biggest stumbling block is the doctors which leads to the patients and the patient counts remaining low. Exactly. As far as a education to the patient, it's, you're saying no, the, the, the actual bottleneck is with the physician.

Speaker 2: Absolutely. I mean, there's only so much that we can do. Remember, you know, patients are uh, uh, when they go into see their doctor and the people who are eligible for medical marijuana are sick. People that do they have a chronic debilitating condition or they're suffering from severe and chronic pain and one of the things that the department did earlier this year is they added severe and chronic pain is a qualifying condition in and of itself, which is fantastic. So your, these are patients who are sick and they don't want to get into a debate with their doctor. You know, people are socialized to trust their doctors judgment and not to question it. You know, how many times have you gone to the doctor yourself and you leave there saying, you know, I should've said something I should have asked, but you, you're intimidated by your doctor.