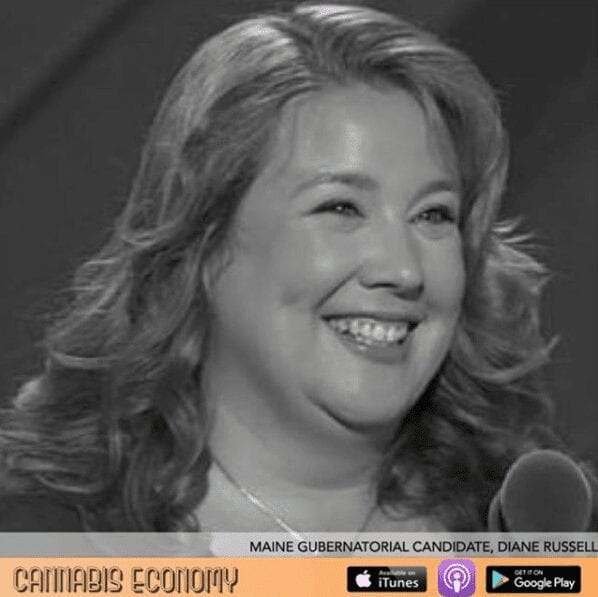 Diane Russell joins us via FaceTime and takes us through why she’s running for Governor in the great state of Maine. Last summer she led the fight to take on the super delegate system in the democratic party to which Bernie Sanders took notice and asked Diane to speak on the main stage at the Democratic National Convention in Philadelphia. Diane’s political journey began during a ME energy crisis when she was able to affect change through cap and trade legislation. Diane also brought change through rank choice or run off. As she runs for Governor, she’s focused on Medicaid for all Mainers which is necessary due to neighboring Canadian universal healthcare competition. Oh yeah, and she introduced an early bill to legalize adult-use cannabis and helped get it on the 2016 ballot.

Speaker 1: Diane Russell joins US via face time. It takes us through why she's running for governor in the great state of Maine. Last summer, she led the fight to take on the super delegate system in the Democratic Party to which Bernie Sanders took notice and asked Diane to speak on the main stage at the Democratic national convention in Philadelphia. Diane's political journey began during a main energy crisis. One, she was able to effect change through Kappa trade legislation. Diane also brought change through rank choice or runoff voting as she runs for governor. She's focused on Medicaid for all mainers, which is necessary due to neighboring Canadian universal healthcare competition. Oh yeah. She introduced an early bill to legalize adult use cannabis and help get it on the 2016 ballot. Welcome to cannabis economy. I'm your host Seth Adler. Check us out on social media handle can economy. That's two ends of the word economy. Diane. Ross, then what are you aiming for? Do you think?

Speaker 1: I also feel like at some point you'd like to be the governor of the great state of Maine

Speaker 2: at some point. That would be nice.

Speaker 3: Is that what's happening? What's happening? Diane Russell, who I met at cannabis economy when we used to do executive forums, which was now a long time ago now, a long time ago. Right. Can you see the gray? Oh yeah, I can. We're on facetime, so that's fantastic. What have you been doing? I think I feel like you had an eventful summer last summer.

Speaker 2: Oh right. So last year I led the fight to take on the superdelegate system and while we end it, we did significantly riff reform it and we got the Democratic Party to change how it allocates its delegate count and particularly how it elects the presidential candidate a each year. So we made a pretty significant change there, lead a national coalition for that, and then Bernie Sanders asked me to speak at the Democratic convention to explain to everybody what we had done and why it was a huge victory and why it was important that we come together.

Speaker 3: So take us, I guess, to Philadelphia that, you know, after all that work, uh, Bernie turned to you and said, hey, there's this big stage out there, why don't you hit it?

Speaker 2: Well, so what's funny is when we had the convention in the states, it started with, I put in an amendment to the rules here in Maine and the whole debate happened with me standing on the floor and the chair of the convention up on the desk. So I'd never been to a convention before. Um, so when they asked me to speak, um, and it was supposed to be five minutes but ended, it ended up being 13 because the audience response was so amazing that I couldn't talk over everybody. Um, I was picturing being on the floor of the convention, like no big deal. So my friend who was with me looked at me at one point, he's like, how are you not absolutely terrified about we're about to do. I was like, what do you mean? He's like, you're about to stand before convention with a massive number of people and you're not even like, you know, there's just not even any crease on your brow.

Speaker 2: Like, I don't get it. And I was like, oh no, no, no, I'm just going to be on the floor of the convention. He goes, no, I don't think you are. I think you're going to be up on the day. And it's just me. It's just the rules committee thing. And then I was like, oh, wait a minute. He's like, yeah, I think I was like, no. So, um, I found out the night before that I was going to be speaking, most people get scheduled well in advance. Uh, I did that. Um, so that was fascinating trying to figure that out and nobody knew that I was going to speak. So I had rather dramatically lost a, a Senate race about two months prior. Um, and so everybody was shocked when I walked out on stage and deliver a speech. They're really engaged people and got folks go and, um, for the convention. And here's the thing, when I was out back, everybody was getting booed off the floor. I'm off the stage. It was incredible. So, uh, I didn't even, I was terrified to go out there because I was expecting to get booed off and well I didn't.

Speaker 3: And we're gonna include the link of that speech in the episode description so folks can see what we're talking about, but let's kind of make sure that we understand what your political bone a few days are you wrecked, you know, didn't just show up. Right? So when did this whole thing start where Diane said to herself, you know what, I think I should try my hand politics.

Speaker 2: So eight years ago, or no, actually it was, I act as though I was in. I'm still in the legislature. I'm not, it was like 10 years ago or close to it. We had a, uh, in 2008 we had a crisis of a and an energy crisis. We it all across the country, but it, but particularly hit main hard because 80 percent of our rooms were fueled with oil and we had the oldest housing stock in the country. So even what you were paying for wasn't really heating your home. It was going up the windows and the doors. So, uh, I wanted to make sure that I had a chance to fix that. I came back home, um, I couldn't find a quote that I like a job with my college degree, so I took a job at the convenience store in my neighborhood and became the friendly neighborhood cashier and the opportunity presented itself to run for office.