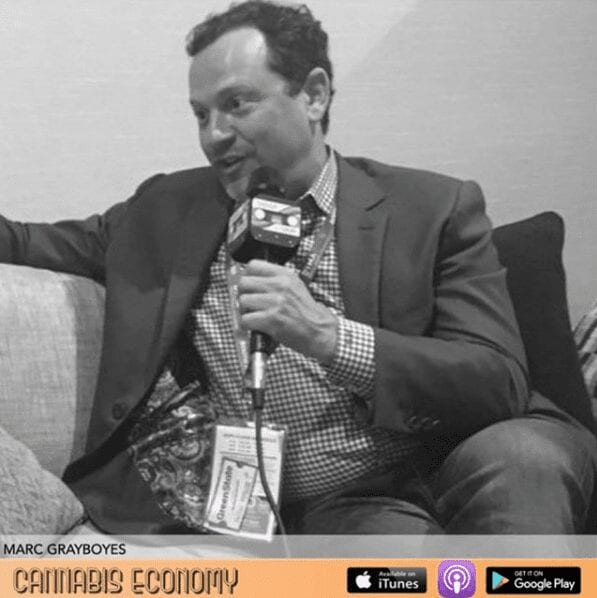 January 22, 2018
Mark Grayboyes joins us as he comes out of stealth mode to share that he and his team of former biotech executives and research scientists are all doing advanced formulation sciences with purified cannabinoids to formulate product for improved delivery. Mark shares that he’s been working in the industry for the past three years and as you can tell, he’s been working not only on the product but the pitch. He went to college in Boulder and has been there for the past 25 years. Mark brings pharmaceutical industry experience to the cannabis industry and so we ask for lessons learned from pharma which we can voluntarily apply in cannabis as an industry…as well as understanding what simply is not possible based on schedule 1 classification.

Speaker 1: Mark graboyes Mark Graboyes joins us as it comes out of stealth mode to share that he and his team of former biotech executives and research scientists are all doing advanced formulation sciences with purified cannabinoids to formulate product for improved delivery. Marcher said he's been working in the industry for the past three years and as you can tell, he's been not only working on the product but the pitch. He went to college in Boulder and has been there for the past 25 years. Mark brings pharmaceutical industry experience into the cannabis industry, and so we asked for lessons learned from Forma, which we can voluntarily apply in the cannabis industry as well as understanding what simply is not possible based on schedule one classification. Welcome to cannabis economy. I'm your host Seth Adler. Check us out on social with the handle can economy. That's two ends and the word economy, Mark Gray boy said graboy all stars. I was going to say Greg Boyle

Speaker 2: to you, but you beat me to the punch. I saw the gray boy all stars in March at the Fox theater in boulder and it was fantastic. They put on a great show for those that are not aware of what the band is. How would you describe the, uh, you know, Karl Denson, New Orleans funk at its best. There you go. If you, um, they might rip your face off is basically what it is. That's what I like to say. All right, so let's. And I did see the dead last couple of nights to, so in boulder dead and company and getting company was at folsom field in boulder, have Friday and Saturday night. So as a grateful dead fan, when you say I saw the dead, it always, it's like, I don't know, you know, just the use of the. Anyway, that's a whole different for different.

Speaker 2: Not Jerry. That's, that's really my pleasure. Yeah, exactly. Which is fine, you know, it's also not pig pen, you know, so lets you know, where do we start and where do we stop, you know, it's uh, it's also not the God shows you. No, no, no, no. I've been John, John Mayer rips on the guitar. I give them a lot of crazy. Alright. Who's great. So, uh, let's just make sure we understand what your company does because I was happy to tell you that I had no idea. And then you told me that you've been around for three years. We have been, we've been in stealth mode. Okay. Quietly executing our research and development programs. So we're a next frontier bioscientist as a team of former biotech executives and research scientists who were all doing advanced formulation sciences, um, with purified cannabinoids. Really, uh, you know, working with highly purified thc and cbd to scientifically formulated for improved delivery.

Speaker 2: Okay. And that is the focus of our R and d program. Uh, we, I co founded the company in early 2014. We raised the first round of seed capital in late 2014. We've established R and d partnerships and we've recently established a manufacturing partnership in Colorado where we will be launching our first gen one line of products in Colorado in the third quarter of this year. Okay. So a very soon coming up quick. Especially knowing that this isn't live, this will go up in a few weeks. It'll be almost tomorrow essentially. Perfect timing. Exactly to that end. Right. If that's what tomorrow is a. let's talk about yesterday. You've got some big brains in there. Right? So let's talk about yours. Where are you from? I grew up outside of Philadelphia and then I moved to boulder for college back in the day and I've been really working in the Boulder Denver community for the better part of 25, 30 years.

Speaker 2: So you are a hometown guy now there a. I guess we shouldn't talk about the phillies and the mets. Me being a mets fan? No. Right. Or the giants and the egos either. Yeah, it's a with the giants and the eagles though. We can both agree on the cowboys, which is always nice. Head is. Yes. Definitely. Point of agreement there. Anyway, so you get to boulder, w, what did you major in? I majored in entrepreneurship and small business management. That was the thing that was a thing like you're my age. They had that at the time they did. We were one of the first entrepreneurship programs in the country, I believe. Interesting out of cu boulder. What were the kind of tenants that they instilled in, you know, it was really about a lot of small business management. So, um, some of the cooler things I did in college was I developed a business plan for what became tabernash brewery, which was a microbrewery.