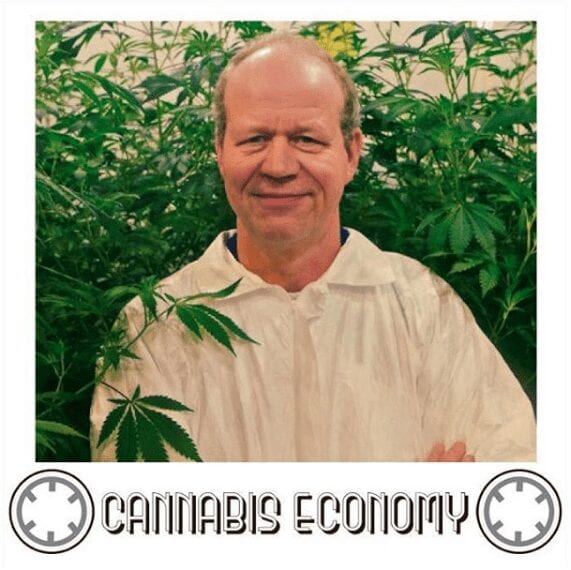 Tjalling Erkelens joins us and shares that Bedrocan’s growth is breathtaking. From a 200 kilo annual production, Tjalling’s operations have grown to now 5,000 kilos of annual production with an ability to quickly scale up to 9,000 kilos of annual production from his two sites in the Netherlands alone. Rather than call it cannabis, the team chooses to refer to the product as an API- an active pharmaceutical ingredient or flos- which is latin for flowers. In some way, Bedrocan is now working on product for Australia, the Czech Republic, Brazil, Italy, Germany, Finland, Poland, Macedonia, Ireland, Norway, Sweden, Israel and for testing purposes, the UK. And in short order- Denmark & Greece.

Speaker 2: Tjalling Ekerlens joins us. That bedroom Kent's growth is breathtaking from a 200 kilo annual production channelings operations have grown to now 5,000 kilos of annual production with the ability to quickly scale up to 9,000 kilos of annual production from his two sites in the Netherlands alone. Rather than call it cannabis, the team chooses to refer to the product is an API and an active pharmaceutical ingredient or floss, which is Latin for flowers in some way. Bedrocan is now working on product for Australia, the Czech Republic, Brazil, Italy, Germany, Finland, Poland, Macedonia, Ireland, Norway, Sweden, Israel, and for testing purposes, the UK and in short order Denmark in Greece. Welcome to cannabis economy. I'm your host Seth Adler. Check us out on social with the handle can economy. That's two ends and the word economy. Charlene, Kirkland's. Gotcha.

Speaker 1: But it's a bit different, more difficult, but in English you can just say chilling. Oakland. I was. I was very, I was practicing right from our last interview. So, uh, here we are, we're really in the middle of the Netherlands. No, you're up in the north more or less. Our other facility is in the middle of the Netherlands and this is our, this is one of her order more original facilities. It's already five years. Right. And this is the 14,000 square feet is a roughly, right? Correct. And the other one's a little bit bigger, right? The other one is about 100,000 square feet. Right. So the reason I say the middle of the Netherlands is we're not in Amsterdam and uh, and, and the, this is something I've been thinking about Holland, right? Is traditionally it's only those two northern promise promise provinces. Whereas the Netherlands is everything.

Speaker 1: Exactly. So are we officially outside of Holland? Yes. Slash yes. Amsterdam is North North Holland for instance. Rotterdam and The Hague is South Holland. Right. But that's that little area on the coast and that's how long actually. And then there's all of the rest of it, all of the rest of the Netherlands. So obviously you operate here. Um, and I want to kind of get a sense of what's going on here, then kind of take a trip around the world as far as what's happening now and then what's coming and then we'll see what else we can talk about it. Right? But what is happening? You have this brand new huge facility that we're not in and you have the, the, uh, old HQ which we are in. What are you doing here in the Netherlands? How much are you producing per year and how excited are you about these operations?

Speaker 3: First and foremost, the growth is breath taking. Yeah, that's what I can tell you. We started expanding from a level of annual production of 200 kilos, which was still the case in 2012, right? Then we started expanding and to keep it very short, we are yet currently we are at the level of about 5,000 kilos annual production and we can quickly scale up to 9,000 kilos of annual production. And that's from these sites in the Netherlands? Yes. Only these sites in the Netherlands, I'm the current actual production is 5,000 kilos annual. So we have a, we have a weekly output of 100 kilos in different varieties, uh, on all, on an industrial scale basically. So it's an industrial processes will see it and what we are actually producing now everybody's talking about Kennedy's and stuff. We are always talking about an API, an active pharmaceutical ingredients. What does that mean? Well, it actually means that we are making material for other companies that make medicines out of it because that is what we have been aiming for all along and what we are still aiming for and what we still believe in as the right way to make cannabis real medicine

Speaker 1: net going down to a Nanda might, uh, you know, from my conversation with Dr Michelle Lynn. Yes. Yup. Okay. Tell, tell us more.

Speaker 3: Once we found out, and actually it was William's team who found out how our endocannabinoid system works and basically endo refers to the body kind of cannabinoid refers to the substances we finding cannabis cannabinoids and our receptors and our receptors of course. And that's where things are starting to become medical in a certain way. As long as we know what we do, if we don't know what we do, you say something is truly medical. It can work in a medical way, but it's not yet a medical product and that's the exact phase where we are with cannabis right now, so what you basically need an outside production and economy and all those things. You need science and that science must prove unambiguously that these product thus this or that or that in the human body when this or that is happening to you, so you have a disease, you're using a cannabinoid product that can be herbal.

Speaker 3: Cannabis is also a cannabinoid product. You're using that in a certain fashion in a certain amount for certain standardized quality and then the doctor says, okay, this is working for you so I can give it to you and you and you and all the other patients and it's proven in a hospital in hospital research, clinical research, it's proven that for at least compared to placebo, it is 4:40 percent of the people active where placebo is only working for 10 percent of the people. So then it's proven that we have a real medicine, right? It also tells us that it's 60 percent of the people still is not working. Right. Interesting. This is a very important. Now, what studies are you referencing when you give us those statistics? Um, we are basically now referring to multiple studies that have been done with cannabinoid products, like side effects from tw. Uh, we are in the middle of clinical trials already with our herbal products in Australia and the Netherlands.