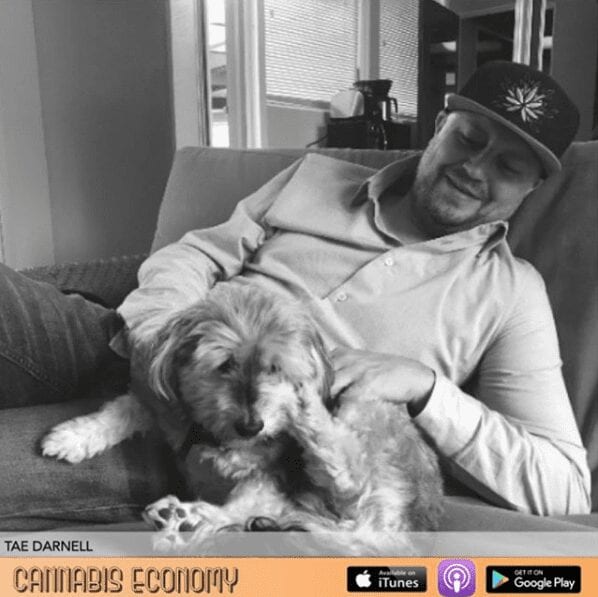 Tae Darnell joins us and takes us through his background. Roughly 75% of the his brothers and sisters were adopted by his father – a musician that toured with Buddy Holly, who himself was adopted by the last traditional spiritual chief of the Lakota Sioux Native Americans. Tae was running around the studio with the likes of Stevie Wonder, Elton John and others as a kid. His father left producing to pursue spiritual medicine. Tae was a direct witness to the War on Drugs and how it’s really the only thing that makes gangs possible. It’s the ultimate catalyst for destabilization as he says. Tae got himself into college, went to run a record label. The music industry was digitally disruption and booted Tae to law and eventually, cannabis.

Speaker 2: Tae Darnell joins us and takes us through his background. Roughly 75 percent of his brothers and sisters were adopted by his father and musician, the toward with buddy holly, who himself, that's his dad, was adopted by the last traditional spiritual chief of the Lakota Sioux Native Americans. Tay was running around the studio with the likes of Stevie wonder, Elton John and others as a kid. His father left producing to pursue spiritual medicine. Tay was a direct witness to the war on drugs and how it's really the only thing that makes gangs possible. It's the ultimate catalyst for destabilization, as he says, take out himself into college, went to run a record label. The music industry was digitally disrupted and Buddha tate to law, and eventually cannabis. Welcome to cannabis economy. I'm your host Seth Adler. Check us out on social with the handle can economy. That's two ends in the world economy. Tate Darnell, that's read a first launch was in.

Speaker 1: No, it was not. Yeah, it was late in 2016. You launched this thing launched in 2016 and I've just built a juggernaut quickly. Why does it feel new still to me? You know, I think because we started in Denver, boulder really kind of refined the process here and have had really started launching all over the country. So you know, I think much of the countries is getting familiar with the brand now that we have people on the street in many cities and getting rolling. Alright. So we started in Denver, Colorado because if you're going to do something in legal cannabis, it's almost as like a tip of the Cap Colorado. Right. When Rowan approached me and told me it was crazy, he said, you want me to get involved with the magazine? There's not a chance. You know, I really did. I laughed at me. He kept coming back with, for sale for magazine.

Speaker 1: I'd never seen it. Said, what are you talking about? Didn't you know the magazine yet? And you know, he uh, he comes from big industry magazines, you know, his last company he built from one to 600 markets in four years. And so we're going to get into your background and kind of, you know, how you got to here and what we're doing now, ron though. So Ron cold is your partner. That's right. I will not say partner in crime. Uh, but your partner is far as he's concerned and you're saying since he was a brand that was already out there and since he wasn't a brand that was out, there was nothing that he created, you know, we've developed and built it over this really over the last couple of years when he came to you in 2016, he said, I think this is a good idea because why?

Speaker 1: Because he, you know, he has a son with autism. Okay. And he came to Colorado looking for answers, um, and was looking for resources and it looked at all the different available publications and really saw a place where we could fill a niche that was relevant and, you know, jumped into it. He's a medical refugee is, that's what we called him and he was looking for, okay, I'm here in Colorado. I might as well read some stuff. That's right. That's right. So it's really what launched it, you know, it's really a passion project and you know, it's, it's a place where we want to get the information out there, but we want to make it accessible. How did he meet you? How did you meet him? How did you guys know? He met me. He came to Colorado and wanted to partner in the business with an attorney.

Speaker 1: What's your tagline? So, so really it's the new normal Sensi magazine. And really the goal here is to really engage this process of cannabis for what it is. It's, it's something that's culturally and socially acceptable. If we, you know, look at it in the normal sense that it is. So it's ultimately about creating a magazine that talks about local community that engages local community, also discusses cannabis. But it's something that you can put on your mom's coffee table, you know, no pictures of weed, no girls in bikinis really, you know, just talking about things that are relevant without getting into maybe what someone would call subculture. It's about the articles. That's right. That's right. It's all content. So you don't even have to worry about the pictures. The point. Right. Alright. So now let's go all the way back. I, you know what I've never asked you is where you're from.

Speaker 1: I'm from Denver. Wait a second because there's that twain that I here am. I get asked that a lot. So I grew up in a house with a about 25 people in it. At one point I had 10 boys in one bedroom. I slept in. My Dad had a number of foster kids. What about half native? I have a big portion of the family is black. So I think I developed like a hybrid. What? Sid accent from Denver. Wow. Wait a second. What? Twenty five people in the house. People knows we had 10 boys in my bedroom so I didn't grow up with, with a whole lot of money, but I got a lot of experience. How. Wait. So where were you age wise? Within? I have so many because the kid, a young kid, you know, and we, we uh. How many within the 10 boys were you in the middle?

Speaker 1: Middle? Yeah. Well it gets a little closer to the top. Okay. You know, three quarters. Got It. And so you are your dad's biological, biological son and. But how much percentage? We're not I guess a 75. Okay. Yeah, there's no me and my biological brother. Two sisters. Okay. Those are all bio and then the other side we have got a ton of brothers and sisters. My Dad was adopted by the last traditional spiritual chief, the Lakota Sioux. So that's how that came into my life. And what was, how was he in a position to be adopted? May I ask from his production career in the music business. So he was producing an artist named buddy redbow and ended up being the first inductee to the native American Music Hall of fame. My Dad's father committed suicide when he was really young. Okay. So fullscript met my dad and was like, I want to adopt you and teach you the medicine.