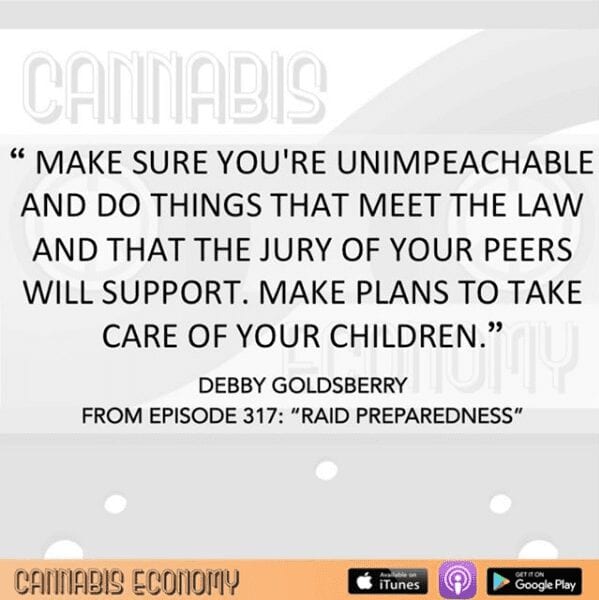 Debby Goldsberry joins us to discuss raid preparedness. Debby has been in the industry since before it was an industry and highlights what she and her team are used to doing. These are principles which the entire industry used to do back before Colorado and Washington legalized adult-use cannabis. Since then, the industry has been operating under the guidance of the Cole Memos. Jeff Sessions rescinded the Cole Memos yesterday. Incidentally, the 10th amendment reads: The Powers not delegated to the United States by the Constitution nor prohibited by it to the States are reserved to the States respectively or to the people.

Speaker 1: Raid preparedness, Debbie Goldsberry joins us to discuss rape preparedness in the wake of the press secretary saying the administration sees adult use cannabis as different than medical. In his comments he referenced the adult use cannabis in relation to the opioid crisis, which it has absolutely nothing to do with, and if anything is a potential solution, the ignorance is stunning. The 10th amendment reads the powers not delegated to the United States by the constitution, nor prohibited by it to the states are reserved to the states respectively or to the people. The 10th amendment has been referenced for the past 50 years in relation to personal and corporate liberty. Where's the consistency in the philosophy as it relates to the state cannabis laws? The hypocrisy is mindblowing. Welcome to cannabis economy. I'm Seth Adler. Here's an instant episode with Debbie Goldsberry. It's good to talk to you.

Speaker 3: Absolutely. So first, before we get to what we're going to get to, what were your thoughts on, um, you know, seeing the press secretary say what he did?

Speaker 2: Well look, I figured some kind of hammer was going to drop. We know that age sessions is not a fan of marijuana based on his old comments about it and we know that trump is following a very conservative agenda. So I figured marijuana was going to be hit at some point. I also know anybody in their right mind isn't coming fully after marijuana because the visuals of upsetting a bunch of medical marijuana patients and you suddenly they're protesting outside the White House. It just doesn't work. And by now enough people know that marijuana really is medicine, that it's helping people who are very critically ill. Nobody wants to come after medical marijuana right now. So I guess I guess I, I guess I figured, yeah, this is probably what's to be expected. We've medical alone to some degree, they're going to go after adult personal use now to what degree and, and now that they've made the statement, what can we do to make sure that doesn't happen?

Speaker 2: that's course I watched that press conference and it's just nothing more than another alternative fact being put forth by that administration that doesn't have any basis. In fact, it proves their ignorance and the fact that they're not looking at real data before they comment on topics of such importance. Uni knows that that medical marijuana is actually bringing down the use of opioids and that in states where it's legalized, there's less abuse and there's less problem with overdose. I'm in the states that marijuana is legal. The statement is a complete, just not even true in the slightest. And in fact, it's dangerous and harmful to America to be making statements like that.