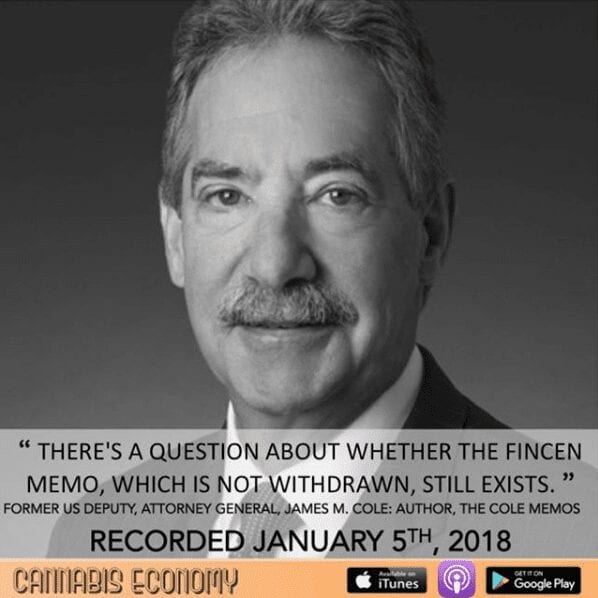 Former Deputy Attorney General of the United States and author of the Cole Memo’s James M. Cole returns to discuss the rescission of the Cole Memos and the Ogden Memo before it. We discuss the thought process behind creating each of the three memos, his first in 2011, the second in 2013 and the final memo released in concert with FinCen guidance on Valentine’s Day 2014. Now that the memos have been rescinded the state of legal cannabis is dictated by the Rohrabacher Blumenaur Amendment for medical cannabis. For adult-use cannabis, it’s now up to US attorneys stationed where adult-use cannabis has been passed. Central California which includes Los Angeles and San Diego and Northern California which includes the Bay Area both have new Attorney’s which have been appointed by AG Sessions.

Seth: Here we are.

James M. Cole: Here we are.

Seth: You saw the news. I saw the news and so thank you so much for having me down. I think it makes sense for us to just go through what we did do one more time even though you and I spoke about it in episode 140 in detail. Let's just quickly go through the past and find ourselves in the present and then go from there. Does that make sense?

James M. Cole: Well, I think there was a level of confusion among the US attorneys' offices as to what the real meaning of the Ogden Memo was and people were interpreting it as, at the time, saying, "As long as you comply with state law, you will not be prosecuted by the Justice Department." That was not the intent of the memo. More the intent of the memo was to sit there and say, "Look, if you have a medical condition or you are a person who is helping to treat somebody with a serious medical condition, it is not a wise use of Department of Justice resources to go after that person." There were medical marijuana usage that were going on in the States that weren't even close to being for a serious medical condition and those weren't encompassed, but they were being read as being encompassed. There was this confusion.

Seth: It's not a free for all here, folks.

James M. Cole: It's not a free for all. It was a we are carving out people who truly have serious medical conditions as an exercise of prosecutorial discretion and telling prosecutors it's not worth the use of our resources for that.