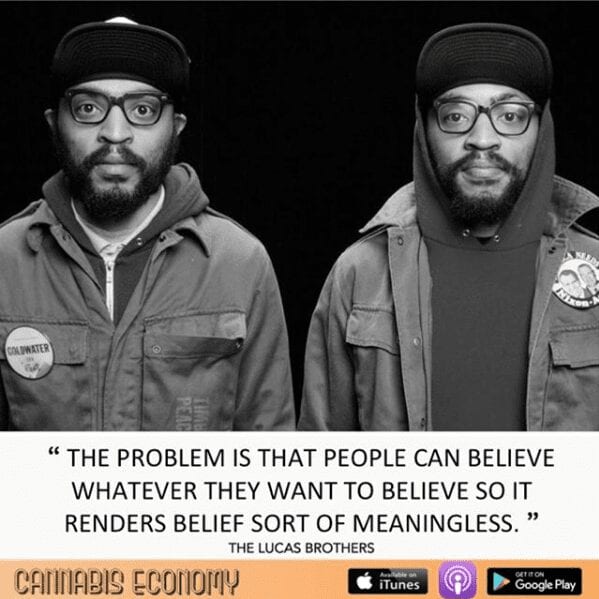 Comedy duo…and twins, the Lucas Brothers join us and share that there was an easy transition from being quiet off stage to being quiet onstage. Kenny and Keith were on their way to being lawyers until they realized that they hated it. And of course stand-up comedy was the next best option. From Newark, NJ which they pronounce like Pork…from Newark they separated for the only time going to Duke and NYU respectively which precipitated them coming back together and staying that way. As it’s said, comedians are today’s philosophers so we find our way to discussing the relationship of women to men and vice versa. We discuss how economics and race have played into our current global geopolitical construct. And we do discuss thoughts on the proliferation, growth and acceptance of cannabis.

Speaker 2: comedy duo, end twins, the Lucas brothers join us and share that there was an easy transition from being quiet offstage to being quite onstage. Kenny and Keith were on their way to being lawyers until they realized that they hated it, and of course stand up comedy was the next best option from Newark, New Jersey, which they pronounced like pork from Newark. They separated for the only time going to duke and Nyu respectively, which precipitated them coming back together and staying that way. As it said, comedians are today's philosophers, so we find our way to discussing the relationship of women to men and vice versa. We discussed how economics and race have played into our current global geopolitical construct and we do discuss thoughts on the proliferation, growth, and acceptance of cannabis. Welcome to cannabis economy. I'm your host Seth Adler. Check us out on social with the handle can economy. That's two ends of the word economy. The Lucas brothers. Yeah. Yep. Which

Speaker 1: nice. This is. I mean, there's love. There's true. There's familial. Yeah. We're close. All right, and so you can introduce [inaudible]. This is audio, so it's important to introduce both of you. Sure. Uh, well I'm Kenny. Oh yeah, you're right where? Lucas, bro. That's, that's for. That's true. Right. And so I guess we should start where we just were, which is, you guys have like Wallace for President Reagan and Goldwater and uh, these are interesting. Pins and Nixon of course. No. So, you know, it's, I got to ask again, what's the, what's the deal? We're just, we like to carry the timeline of republican thought on our chest. We like to remind someone needs to carry the tradition. Yeah, I see. So are we, and I don't mean to get via the whole thing is you guys are funny, but you know what your, is it that you're saying, hey, this whole thing that's happening now, isn't that necessarily much different than what we've experienced before?

Speaker 4: I think it's, it all evolved from something. So, I mean it's a little different because of the Internet, but in terms of the emotions behind the beliefs, I don't think it's that much different. Yeah. The emotions have been festering for years so that you don't want it to be, uh, an overreaction, but you certainly have to,

Speaker 1: you know, assess it properly. I guess that's what I'm gone it. So that's the policy. Then of course this is a person. We're not gonna. Spend any time on that? Not at all. Let's do this because if you're going to do this, we should plug something. So like what do we need to know? You guys are very funny and, but it's so dry. It's like Sinai, desert, dry eye. We know how to make it less dry. I don't drink before we go for a drink before drink water. Some words less dry. Yeah, no, no, but we can't make it more dry I guess is the point. So what is this? Can I ask about the parents and if it was like it was Kinda, you know, humor, uh, appreciated. And were they draw like it's a very specific brand of humor, right?

Speaker 4: Um, I mean we were always really, really quiet. So, I mean, I think that that's just, it was an accurate transmission of being on stage and being quiet. Don't we would never really. Loud. Family was very like bolster. It's like it's the complete opposite of the style of comedy that would generally come from a, you know? Yeah. I don't know why it's. I don't know why we're the way we are.

Speaker 1: But you all. Youtube specifically. If the family was loud, you guys were.

Speaker 4: No, we were not. We were always quiet and pensive. Family, certain members of our family.

Speaker 1: How big is it? Family? How many other brothers and sisters too?

Speaker 4: Two younger brothers. We have a bunch of aunts, cousins

Speaker 1: and so there was. There was place I guess for quiet and you took it needed to be some peer. Yeah, we have to represent the. The outcome. The opposite. Okay, fair enough. Have you always been twins? For the most part? For the most part. That's fair. That's a good answer to a stupid question came up. People who was first, I guess I was first 10 minutes and that matters because I know a triplet. He's one of my buddies and it's like the whole life is all about. I'm older. Really? Right, because you'd said it right away. There was no hesitation. No, I know, but for so long, I know. Is it 10 minutes or a minute? It might be a minute. It might be a minute. Yeah, no, yeah. My worldview was rocked because my mom told me it was a minute, 10 minutes, so everything just sort of changed.