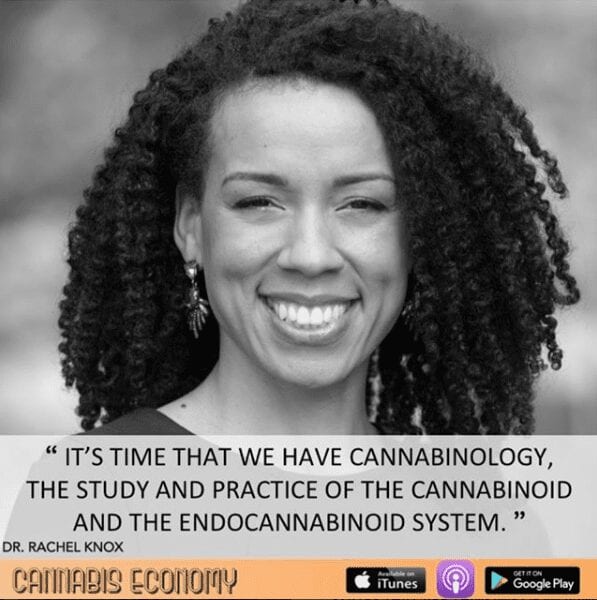 Dr. Rachel Knox returns and as a commissioner on the Oregon Cannabis Commission. Medical Marijuana has been in existence since 1998 in Oregon and was originally overseen by the Health Authority. With the onset of Adult Use cannabis in the state, Oregon’s Governor Brown sought to ensure that the medical marijuana program was well structured and well run and at the forefront of cannabis research, so she developed the Commission to oversee it. She looked for capable and committed folks like Rachel and two other doctors, a patient representative, and regulators from both the Health Authority and from the OLCC who oversee adult use. The goal is to ensure that the program is robust, features patient advocacy and is focused on further research in Oregon.

Speaker 1: Medical marijuana has been in existence since 1998 in Oregon and was originally overseen by the health authority with the onset of adult use cannabis in the state. Oregon's governor Brown sought to ensure that the medical marijuana program was well structured and well run and at the forefront of cannabis research, so she developed the commission to oversee it. She looked for capable and committed folks like Rachel and two other doctors, a patient representative and regulators from both the health authority and from the oil cc who oversee adult use. The goal is to ensure that the program is robust features, patient advocacy, and is focused on further research in Oregon. Welcome to cannabis economy. I'm your host Seth Adler. Check us out on social with the hammer can economy. That's two ends of the word economy. Dr Rachel Knox

Speaker 2: and a place to live and we're getting way too many transplants from other states that are congesting our highways. Oh, I see.

Speaker 1: Interesting. So what we're saying is that people have caught on to this whole thing.

Speaker 2: Portland really? He has the best of everything. It's not a big metropolis, but you know, it's big enough for most people's tastes, right? You have maybe the big city folks who want to downgrade. You have the country bumpkins you want to get a taste of the city life. Um, and so we have everybody moving here. Then what's really catching on is this sort of craft culture at Portland is known for. And so if you want to start your own anything, you know, Portland might be a good choice of relocation and yeah, once again, people are catching on to that because we are an hour and a half from the coast. We're an hour and a half from the mountains. We're at two hours from Seattle. We are an hour and 20 minute flight to the bay area, um, for pretty low fares. So it's a, it's the ideal place, I suppose

Speaker 3: and know now you're, you're, you don't even just live there anymore. You're kind of a part of what is happening. You are on Dr. Rachel Knox, thank you so much for uh, giving us a few more minutes of your time. Thanks for returning here to cannabis economy. You're on the cannabis commission for Oregon.

Speaker 3: Congratulations on that. Uh, I know that you had been seated a kind of a while back. You and I haven't spoken on microphone since it did occur, so just give us a sense of, um, what the commission is doing, what your role on the commission is and uh, you know, a sense of what's happening now here in early 2018.

Speaker 2: So the Oregon Cannabis Commission was created to oversee the Oregon medical marijuana program, which has been around since 1998. It was originally, um, facilitated through and overseen by the Oregon Health Authority. And as recreational cannabis has come onto the scene in Oregon, a lot of voters, patient, patient consumers, had been very concerned about what's happening to the medical marijuana program and to combat that. And that's only because the people who were, um, who, who had the medical program in their purview weren't the best executioners of, of the game plan. And you know, patients go by the wayside. Providers fell by the wayside. So because Governor Brown, um, and her, her folks and Salem believe in the maintenance and integrity of a well structured well run medical program, I mean Oregon wants to be in, in, in the forefront of researching cannabis. For example, they developed the commission to oversee the next iteration of the medical program here and they were very interested in having capable and committed people to the industry on that commission.

Speaker 2: Um, so we have three doctors who are committed to camp clinical cannabis medicine and cannabis research and public health. We have a representative from the patient population. We have, you know, authorities and the Oregon Health Authority and the OCC, the recreational regulators of cannabis all in one committee. And our goal is to just oversee really a more robust, more focused a medical program in Oregon, really pushing for advocacy for patients and their providers, but not only their cannabis providers, but there are medical providers supporting that crowd of folks right in their ability to provide good care for patients. But also further research in Oregon. We really want to collect the data and run the studies that show how effective cannabis can be. Particularly when we're amidst this opioid crisis, which is another one of our governors, um, areas of interest.