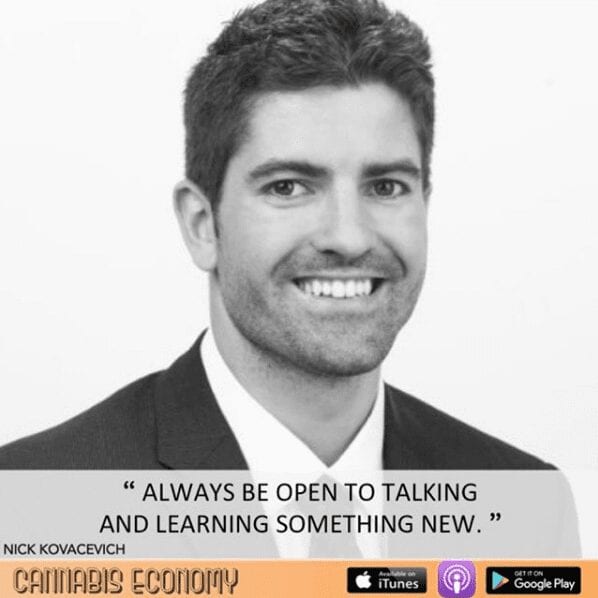 Nick Kovacevich joins us and shares his background in college basketball and how he takes lessons learned on the court to the board room. Lesson one as he says is figuring out how to work together. While you can develop deep relationships on a team, you don’t have to necessarily like everyone as long as you’re all committed to the same goal. You’re all working for the same purpose. Work together to benefit those who have specific skills and put them in a position to succeed. None of that is different in business. The competitive nature of sports is also hard to get away from in business. Recorded at MJBizCon, Nick notes that his competitive spirit has him wanting to compete and win. But he balances that gut response with the fact that the cannabis industry must have collaboration and will have consolidation.

Speaker 1: Nick Kovacevich joins us and shares his background in college basketball, and now he takes lessons learned on the court to the boardroom. Lesson one, as he says, is figuring out how to work together. While you can develop deep relationships on a team, you don't have to necessarily like everyone, as long as you're all committed to the same goal. You're all working for the same purpose, work together to benefit those who have specific skills and put them in a position to succeed. None of that is different in business. The competitive nature of sports is also hard to get away from. In business. Recorded at mj biz con. Nick notes at this competitive spirit has him wanting to compete and win, but he bouNces that gut response with the fact that the cannabis industry must have collaboration and we'll have consolidation. Welcome to cannabis economy.

Speaker 1: I'm your host, seth adler. Check us out on social with the american economy. That's two ends of the word economy. NicK kovacevich kovacevich. I'm so glad that I asked because that is Not what I was thinking. Say that one more time. Kovacevich, what kind of thAt SlAvic in some way you are correct? Operation croatian. Yeah. So, uh, I have croatian friends, they've told me to come to Croatia because it's one of the most beautiful places in the world. You got to go now. have you been? Yes. You didn't grow up there though? No, but I have a second cousin that lives there. He makes homemade grappa. It's phenomenal. I gotcha. But how often do you get back? I've only been the one time and it was in 2012, but it's already getting so popular. Yeah, like just, it's becoming one of those places that people go, we don't want to go to the places that people go, yeah, we want to go to the places and then you're like, everyone starts going like, oh man, I was there years ago. That's exactly last decade. That's exactly it. I don't, uh,

Speaker 3: you know, I got a dive right in, you know, you've been one place that not many people have been and that's the sweet 16 nick. so I'm just going to dive right in. Okay. Uh, it was division two. I will say that so sweet. 16 of the ncaa tournament. That's not the nca tournament. I'm talking about the not the one you're, you're probably watching on tv division to. Yeah. Um, you know, great competition. Or our college was a southwest baptist university. We were ranked number two in the country for d to my senior year. We also be Utah at Utah. Okay. So we're good. We're good, right? Yeah. But you know, it's, it's, it's a step below the, the big tourney. but um, you know, we, we certainly had a lot of fun there. We, we built a great team. We unfortunately got knocked out in the sweet 16.

Speaker 3: Yeah. Uh, before going onto a of the elite eight, which they have in Massachusetts for a, for division two. So it was, it was a good experience. I played one year of division one at, at san jose state and uh, we want a whole six games that year. Got it. So we didn't make it to any tournament starting to make more sense because when you walked in, you're taller than me. That's not hard to do, but you're like a normal sized person and I think you were small forward, right? Yeah. It's a shooting guard. Small forward shooting guard and [inaudible] small forward ind , two. Yes, exactly. Alright, so then san jose state you said? Yeah. Okay. And did you, when did you start any games at all or. No, I, uh, you know, I was, I think 100 percent that year from three. One for one, had a pretty good division one career.

Speaker 3: It's fantastic. I might be in a history book somewhere. Sure. Like moonlight graham, if you've ever seen the movie field of dreams or read the book shoeless joe, uh, but he didn't get to bat and that's a different sport. I guess what I need to know from you being on the court is what have you taken forward from that team sport? Yes. Okay, fine. You were in d one, you did compete at a high level. You're saying you're not wearing a starter, but you were d, two. What do you take from the court into the boardroom, so to speak? I think the most important thing right is figuring out a way to work together, right? You know, I've been on so many teams and, and you know, you get to obviously develop really deep relationships, but it's not necessarily that you have to like everyone on your team, but you guys are committed to the same goal, right?

Speaker 3: So you're all working for the same purpose. You figure out a way that you're gonna work together to benefit those who have certain skiLls and put them in positions to succeed. And I think it's no different in the business environment and certainly there's the competitive aspect of sports, which I think is hard to get away from when you get into the business and you're, you go around, you know, we're at a show like this and I see a bunch of other guys doing what we're doing, right? We're trying to do what we're doing. And so, you know, you get that competitive spirit where you're like, you know, you want to go out there and you want to compete and you want to win. Uh, and you know, you have to balance that with the, you know, the idea that especially in the cannabis industry, there's so much opportunity that it's not a zero sum game. And so there are going to be other people that find niches. There's going to be potential collaboration, uh, with competitors. Uh, there's gonna be some consolidation, you know, mergers and acquisitions and ultimately there's gonna be some friendly competition, but if you bring the mentality that you're going to be a winter and everything you do, hopefully you can rise above the competition and, and, and be, you know, meet the successes that are set by our goals of our orders