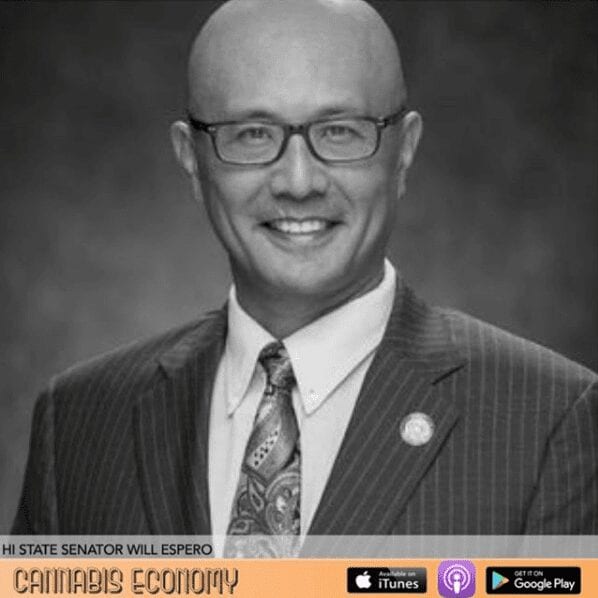 Hawaii State Senator Will Espero joins us and shares that in 2000, Hawaii became the first legislature in the nation to pass legal medical cannabis. Since then, though it’s been slow going. There have been obstacles and roadblocks. Will was the lead Senator on the dispensary bill which finally passed in 2015. The dispensaries are now up and running. And go figure, the sky has not fallen. That said, the system is somewhat conservative. Law Enforcement desired to not have paraphernalia sold inside dispensaries, and so it’s not. Specific felonies have been introduced for dispensary owners regarding cannabis diversion. That said, reciprocity is on the table and Will is interested in developing the hemp market in Hawaii.

Speaker 2: state Senator Will Espero Hawaii state Senator Willow Sparrow joins us and shares that in 2000 Hawaii became the first legislature in the nation to pass legal medical cannabis. Since then, though, it's been slow going. There have been obstacles and roadblocks. Will was the lead senator on the dispensary bill, which finally passed in 2015, the dispensary's. You're now up and running and go figure. The Sky has not fallen. That said, the system is somewhat conservative. Law enforcement desire to not have paraphernalia sold inside dispensary's and so it's not specific. Felonies have been introduced for dispensary owners regarding cannabis diversion. That said reciprocity is on the table and we'll is interested in developing the hemp market in Hawaii. Welcome to cannabis economy. I'm your host Seth Adler. Check us out on social with the hand mechanic economy. That's two ends of the word economy. State senator will aspero most of the time when people come to Hawaii. Yeah,

Speaker 1: they're looking for sunshine and some time at the beach, so I feel sorry for them when they come here and it's rainy and overcast, although usually the rain comes and goes within a day or two, so I believe tomorrow we may have some sunshine. Okay. But it does rain. I think this is the island with the most strain, which is why it's called the garden aisle and it's sold lush and beautiful. So obviously the rain has a purpose. Yeah, no, absolutely. It's still looks beautiful all given, uh, you know, given its, uh, its drawbacks, you know, um, which, which I appreciate. State senator will aspero am I pronouncing that correct? That's correct. All right, now you are one of these people that we can depend on as far as cannabis is concerned. Yes. Uh, in Hawaii, it's taken us awhile to get to the point where we are, however it's moving now that our dispensary's are up and running.

Speaker 1: Yes, they are. FYI, in 2000 we were the first legislature in the nation to pass medical cannabis, the first in the nation. However, since that we hadn't done a whole lot. There'd been some obstacles and roadblocks. It wasn't until 2015 that we finally passed the dispensary bill that I was the lead senator on that bill and now that we have a few up and running, hopefully by next year all of them will be up and running and everyone will see that it's working as planned, that society has not ruined itself and that there is a huge benefit for our patients to have medical cannabis available to them. Certainly. And we want to kind of get an, a Hawaii one. Oh, one cannabis. A Hawaii from you, but let's jump in on that. Twenty 15 bill. How did you come to be the sponsor of the bill and what was in it?

Speaker 1: I wasn't the main sponsor on this bill. This was a house bill. It was a house bill, but I was the chairman back then of the public safety intergovernmental and military affairs committee. And I'm the Narcotics Enforcement Division came under my per view, which is why I was, uh, the, uh, second chair on that actually replaced the right time type. Right. But what happened? Uh, that's an interesting story because the bill died. Okay. The bill died in 2015 and we had to resign from the dad and, and that, that point is when I took over the lead in the Senate. Great. And we ended up passing it and it allowed the dispensary system, which we now have in place to begin selling in July of 2016, which almost happened almost. Yeah, we were, uh, about a year off. Thank goodness we've got some up and running now. And better late than never a true a use of that term.