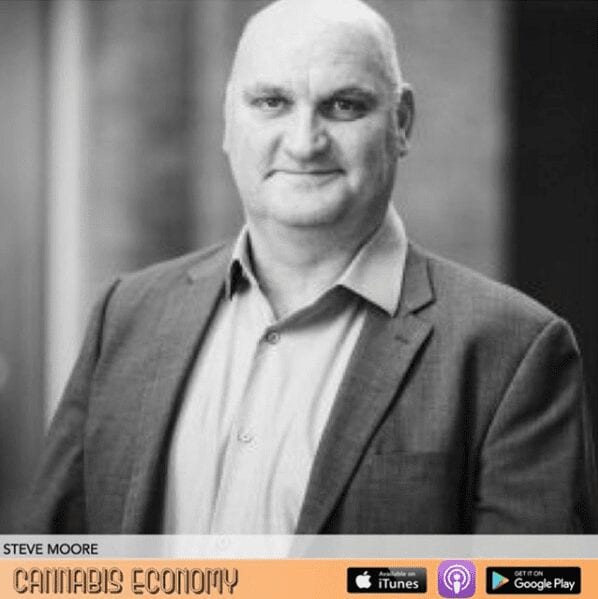 Steve Moore joins us from CannaTech in London and takes through his public affairs experience. He’s done work for both David Cameron and Tony Blair. Originally from Northern Ireland, he notes it was an interesting time to be in that region in the 1970’s & 80’s. As a kid he didn’t really understand what was happening. As a teenager he says he adapted accordingly. People were able to weave normal life around what was happening. Regarding cannabis legalization- Steve has noticed a few things- cannabis normalization changes from place to place. Stereotypes are nebulous. And the political environment is always unique regarding cannabis. Steve takes us through the unique situation of the cannabis economy in England.

Speaker 2: Steve Moore joins us from Canada and London. That takes us through his public affairs experience. He's done work for both David Cameron and Tony Blair originally for Northern Ireland. He notes it was an interesting time to be in that region in the 19 seventies and eighties as a kid. He didn't really understand what was happening as a teenager. He says he adapted accordingly. People were able to eat normal life around what was happening regarding cannabis legalization. Steve has noticed a few things. Cannabis normalization changes from place to place. Stereotypes are nebulous and the political environment is always unique. Regarding cannabis. Steve takes us through the unique situation of the cannabis economy in England. Welcome to cannabis economy. I'm your host Seth Adler. Check us out on social with the handle can economy. That's two ends of the word economy. Steve Moore, depends where you come from, your face. We're very relaxed.

Speaker 2: You volt fast. Can I call it k five? Really? I saw it and I'm like bolted. Foshay. Yeah. You're a republic policy kind of guy. Let's understand a little bit of your background. You said that you worked with Tony. Tony, Tony Blair, I think you said I've worked with. No, we need this. Yeah. Yeah. You've got this here. Here we go. Um, I've worked with politicians for 30 years on all range of issues, so, um, I, I've worked with both Conservative Party on the Labor Party, I various things, various guises. Yeah. Because he said Cameron, so I was saying Tony Blair just to get under the. Yeah, yeah, yeah. What you've done both sides see some support for time for Blair as well. So. Okay, there you go. Yes. So both sides of the fence. So really you are a policy guy. Truly. Well, I'm not really a policy guy. I'm more a campaign guy, public affairs, so

Speaker 3: I can get the message out, I can understand what the issues are, I can tell the public about it. Maybe even make them think what I want them to think. That's probably the last part of the trick. Yeah, that's part of the magic. That's part of the magic if you go right, let's make sure we understand how you know how to do that. Where are you from? It sounds like close to here. Yeah. So, so I'm originally from Northern Ireland in Belfast on, but I've lived here. I've lived in theU , s other than Australia. Uh, I've been back here for 25 years. Our offices are five miles from here and the west end of London. Uh, and we launched in February last year. Okay. Let's take these one by one Northern Ireland back in the seventies. Yeah. Northern Ireland in the safety. You just set this up for us.

Speaker 3: What was it like as a kid then? What was it was, um, it was the most interesting time to grow up. They're the most of a and a right in the middle of the troubles. I was born just the boat later enough to avoid all the real trump troubles. I was a teenager growing up in the, uh, independent worst part of the trouble is probably wasn't intimately involved. So as a bystander, understood as a teenager than what, what was it? Because I remember simply reading the papers. Yeah, I remember reading historical kind of feedback because you might have a year or two on me. Yeah. Yeah. But as a teenager when this was going on, what does that do to a teenagers mind? Well, it's a very politicized environment, but also it's a teenager has nothing to compare it to their life experience. Were there things that you adopted according accordingly, uh, and uh, what's extraordinary but northern autumn and you give them this, give them the size of the place and the stent of a murders.

Speaker 3: Terrorism is the sort of normal life that most people could lead. People with their normal lives around that. Mothers in chaos, but on the flection now I can look back and say it was modeled the renewal bars open in the evenings or new cinemas or an a restaurants. Right? But you have to get searched. The city center body search, going city center, those kinds of things are clearly mad. Did. Did you going through that experience, did that inform you or kind of life's work in policy or is this just a happy occurrence? It's a hub in some ways. You're saying happy occurrence, I'll tell Ya. Yeah, I think it's, it's your life, your experiences as a growing up our bond in some way, whether you recognize they're not to have shipped some of the bottom tier and the rest of your life. I think I was probably politicized earlier than most people.