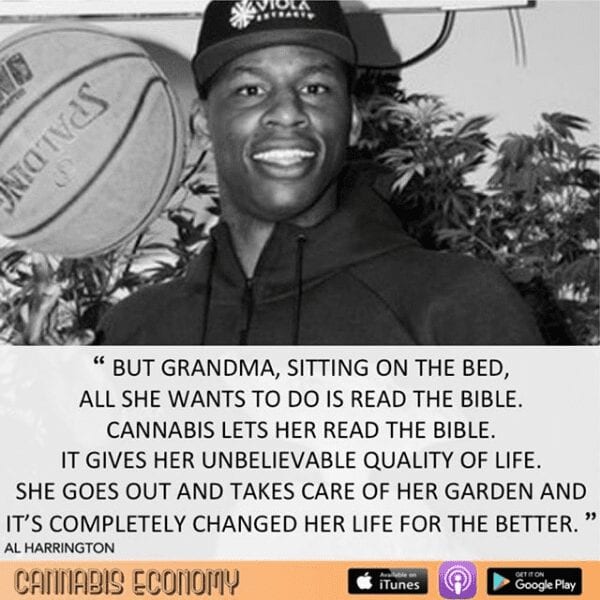 Former NBA phenom Al Harrington joins us and shares the valuable lessons learned from his pre-pro coaches. He discusses his career in the NBA, what he learned from the veterans when he got there and what he learned from the former commissioner when he left. Al also of course shares what led to his foray into the cannabis economy and why exactly one of his company’s is named after his grandmother.

Seth Adler: - I mean, but shouldn't we be in New Jersey or something?

Al Harrington: I mean, no, not this time of year. I'd much prefer California.

Seth Adler: To New Jersey, fair enough. It is raining though. What the -

Al Harrington: I know. You brought this with you.

Seth Adler: I did.

Al Harrington: You got to go.

Seth Adler: This is me apologizing to you, Al Harrington. But you're from New Jersey though.

Seth Adler: There we go. So, what were you - how old could you have been when you picked up the basketball?

Al Harrington: Man, you know what? I always tried to pick it up growing up, but believe it or not, I was fat growing up.

Al Harrington: I was the guy at the park, never got picked.

Seth Adler: Holy - I think this is like, we're peas in a pod.

Seth Adler: There's only one difference, yours changed.

Al Harrington: Right, I didn't beat my mom until I was a freshman in high school.

Al Harrington: She used to always beat me one-on-one.

Al Harrington: It's not like she played high school, but I just couldn't beat her.

Al Harrington: But after a while I put it all together.

Al Harrington: So, let me tell you what happened. So, we moved from Orange, New Jersey to Roselle. When I got there, I had a growth spurt that year. And when I finished 8th grade, I was 5'9.5". When I started my freshman year in Roselle, New Jersey, I was 6'4".

Seth Adler: There we go. That's what happened.

Al Harrington: Football was my first love. I wanted to Lawrence Taylor. My dream was to go to Notre Dame and play for the New York Giants. So, I played freshman year of football -

Al Harrington: No, actually I was a lineman. Remember I told you I was uncoordinated.

Al Harrington: [inaudible 00:03:50] so, I was getting in the way, but I did a really good job getting in the way and I got moved up to JV. So, I played the last five games of the season on JV, and the JV coach was actually the freshman basketball coach. So, he told me, "Call me Big Daddy," for some reason. So, my name was Big Daddy. Big Daddy! Big Daddy! It's just like, "Big Daddy, you playing basketball this year." I was like, "Nah, coach. I just want to focus on next year because I want to play varsity." So, he's a real intimidating and ugly dude too [inaudible 00:04:17]. He was just like, "You playing basketball." So I was like, "Alright, coach. I'm playing basketball."

Al Harrington: So, I played basketball my freshman year. I stunk it up, but I was 6'4", 6'4" 6'5". And to this day, I'm a firm believer in God, that God just has a plan for you, whether you have another plan for yourself. He has a plan and it's going to go according to how he wanted it to go. And, my AAU coach, a guy named Jay [inaudible 00:04:41], he was coming to recruit two of the better players on my team, but he befriended me. He felt like I was the way in. So, he was like, "Al, I'll talk to these guys, tell them to play with us, play with the Road Runners [inaudible 00:04:49], and I was like, "Alright, I'll talk to them." Kept talking to them, they never wanted to play. But at the same time, he would invite me to the gym as well.