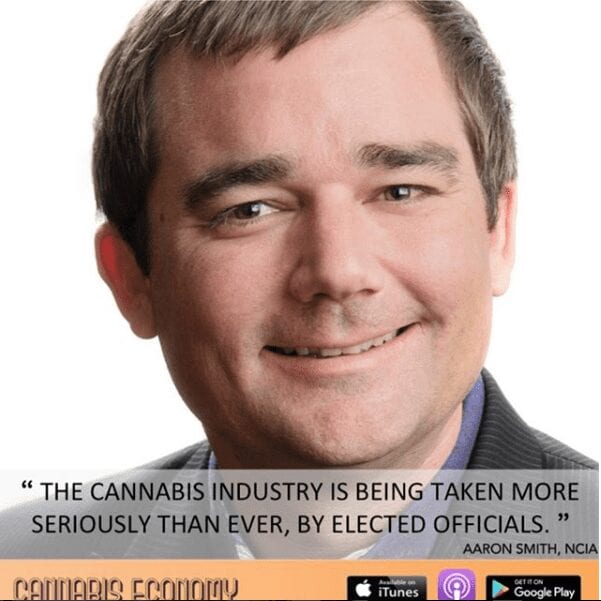 Providing an update on all things NCIA, Aaron Smith returns to discuss what the association is seeing.

Aaron Smith, the executive director of the National Cannabis Industry Association. It's been like a long time now already. Right? How long has this we, you and I know each other for a very long time now. I think in cannabis ears probably about 45 years. I think that a seven, 45. You might be. You're being too kind. I think it's, for me it's closer to a 42 right now I'm on the. I'm like almost my age. Yeah. That's the way it works, but you're looking at.

Speaker 1: You're looking good. Yeah. Thank you. I appreciate that. I appreciate that. Okay. First things first. Of course, right? Uh, it was a Thursday. I don't remember which day, but. Oh No, it was the first week of the year because California had just come online as I was that same week, a jeff sessions, the attorney general rescinded the three coal memos and the Ogden memo before, by the way, just for fun, did not rescind a fence and a guidance, which I found interesting. And so did Jim Cole. Um, when that happened that day, I don't know what does a Guy Aaron Smith think

Speaker 2: in the moment, you know, it was certainly a disappointment and I was on, you know, little a near surprise on January fourth, but I'd say, you know, it wasn't really a huge surprise because the, you know, the Department of Justice, uh, and essentially all the executive branch departments have been looking at Obama era memos and taking the approach that they need to be done away with. And then in this trump era. And uh, so, you know, while the announcement was disappointing, uh, it's really, you know, important to know that it's not a huge shift in policy and that there was no directive, that there needed to be some coordinated crackdown. And as you mentioned, the fincen guidance was still left in place and the Treasury Department said that they didn't know anything about this. So there was no, there was no coordination with, uh, with treasury, there's no coordination with Congress and from our understanding, even the White House

Speaker 1: or his attorneys a crossed the land, right. There was not any coordination at all, which is actually a positive thing as you and I both know. Okay, fine. So that's kind of immediate, uh, reaction as far as you not being surprised. You and I spoke kind of back, I don't remember one who was maybe after the election and before, uh, you know, inauguration and there was a little bit of, and definitely within the industry there was a little bit of excitement of this, you know, administration treating a cannabis differently, you know, some of our, uh, you know, very good friends who are definitely on the right side of the political sphere. Uh, we're almost guaranteeing that this was going to be a very friendly administration. So in that way I was surprised. I mean, you know, just based on the conversations you were having and then for this, you know, for him to, I think jeff sessions to resend it, it makes sense, but for that, for this administration to allow, it was surprising to me. Well, I mean, there was, there's never been a guarantee and I think some, some people have become a little bit overconfident, certainly, certainly. But

Speaker 2: this again, jeff sessions was on an island, you know, this was not something that was ordered from above and even in coordinated with above. And, uh, I think that we haven't seen, uh, we've seen, you know, some investors get some cold feet here and there, but by and large, I mean the industry is still going gangbusters and people are continuing to invest and grow their businesses. And I think that, uh, you know, sessions is kind of a relic of a past time bygone era of bygone era. Right? And it does not represent the, certainly not the majority of Americans, but I don't think even represents really the majority viewpoint within the, within his own party and his own administration.

Speaker 1: Certainly not. Certainly not. And you, you noted that there wasn't necessarily a coordinated a thing that happened or you know, a, a next step after the rescission, you know, he, he did write his own three paragraph memo. Fantastic. But that same week he did sit

Speaker 2: a new attorney in a new federal attorney in the San Francisco area, new federal attorney in the Los Angeles area, Los Angeles being covered by a being called central California somehow. Um, but that raised my eyebrow and makes me think still to this day that, that there is maybe something that could happen specifically in California. Well, I mean, certainly there's some concern because what, you know, what resending that memo means is that, uh, this, you know, enforcement priorities are now up to individual us attorneys. There are some of these, these interim attorneys and have been appointed and not confirmed who we don't know where their stance is on cannabis. But then we've also seen us attorneys like Bob Troyer from here in the district of Colorado who immediately came out and said the priorities aren't changing. And I think state attorney general, you know, said, hey, we're on the same page. I don't know what page jeff sessions is on, but me, you know, federal and state are on the same page in Colorado.