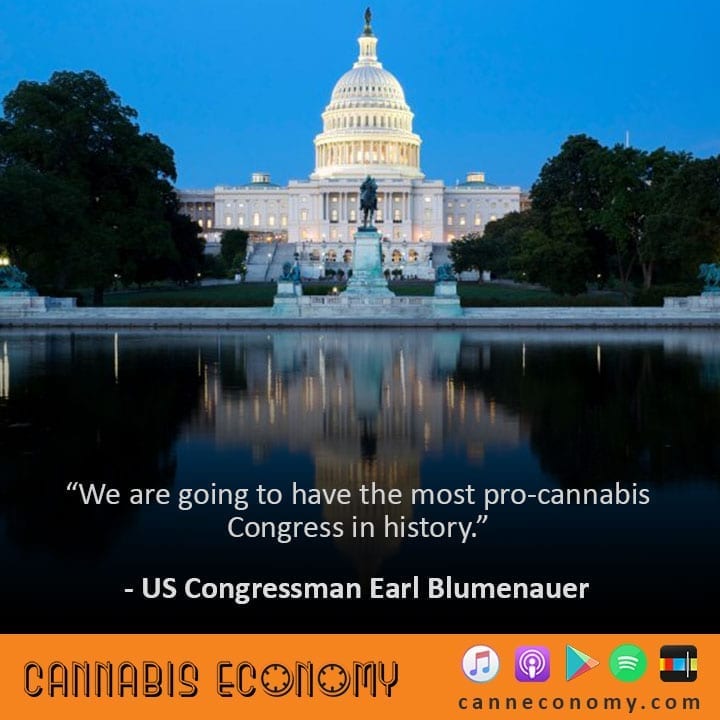 In Congressman Blumenauer’s third visit, just a day after the Farm Bill passed, he talks about both its success regarding hemp as well as its lack of addressing remaining issues facing American farmers like nutrition, extreme weather, and tariffs. He also discusses some other bills already teed up for congress regarding research, veterans, and banking. Even broader reform in these areas is likely to happen in all of North America in the coming years, potentially alleviating problems of illegal drug trade and opioid crisis while also saving billions of dollars.

Speaker 1: Congressman Blumenauer, thank you so much for sitting down for a third time. It does seem like this time is different for a number of reasons. Podcast line knows no time, yesterday the farm bill passed. We have a new Congress coming in in just a few weeks. On the farm bill, what are your thoughts?

Blumenauer: Well, it represents a missed opportunity to be able to deal with the larger issues facing America and farmers, and the public, dealing with nutrition, dealing with being able to protect threatened agricultural communities, dealing with extreme weather events, Trump tariffs, we still pay too much to the wrong people to grow the wrong food, the wrong ways. But, this is an area, as you know, we have been working for over a dozen years to try and make a better farm bill. And I spent a lot of time traveling around the country working on that the last two or three years, three years actually.

Blumenauer: And there are a number of provisions in there that I'm pleased with, not the least of which is hemp. As you know, that was one of our battles in the last farm bill, and we got this little provision, a little toe hold, that some took advantage of, and signaled that we could move forward. It was one of a number of votes that were successful in the last Congress before the Republicans essentially decided they were gonna shut us out.

Blumenauer: The farm bill was such that they couldn't prevent it, and that was an area that actually had interesting breadth of support. We've always had support in Kentucky because they understand that they've gotta do something to transition tobacco farmers into sustainable profitable crop, and hemp is a natural.

Speaker 1: And they have done that. There's tremendous hemp farms in Kentucky.

Blumenauer: They're are moving, which given the structure of the Senate leadership, that helps a little bit.

Blumenauer: But we've also had strong support for my friend and colleague, Ron Widen, on the Senate Finance Committee, and in the House, we've had a number of successful votes promoting hemp, so it was teed up and ready to go. And this is going to, I think, serve to accelerate that progress.

Speaker 1: Yeah, and what is, I guess most interesting to me is the fact that we went ahead and took hemp, .3% and below, off of the Controlled Substances Act. That verbiage is important. We just kind of, not kind of, we actually just removed it. It's just that easy, isn't it?

Blumenauer: Well, it should be. And we've had conversations before about this. And actually if the Republican leadership had allowed the legislative process to work, we could have made more progress this time because we had more people in Congress who understand the failed prohibition of marijuana is a tragic mistake.