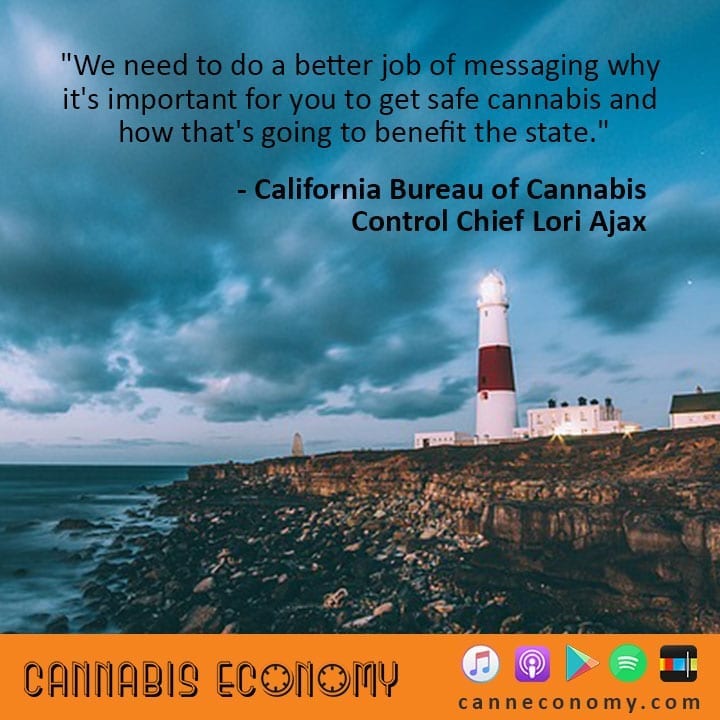 Lori Ajax is back to talk about the last year that flew by and the next year looming on the horizon. Lessons learned from the last year are carried forward into expectations for year two by looking at the transition of the industry into the regulated market, and the struggles that the transition continues to entail. Tax structures, competition from illicit markets, and the complications of licensing all mean there is a need for better messaging going forward.

Speaker 2: Med Men continues to expand it's footprint on the cannabis landscape, opening new stores in Los Angeles, Las Vegas, and the iconic 5th Avenue in Manhattan. They've also opened a 45,000 foot high tech cannabis cultivation and manufacturing facility in Nevada. The company has reached a $1 billion valuation, making it the countries first cannabis unicorn, and it's just the beginning. Learn how Med Men is building the future of cannabis today at medmen.com.

Seth Adler: Lori Ajax, I'm not in California and you are not in New York it's safe to say.

Seth Adler: Which is why we're on the phone with each other is my point.

Seth Adler: You just told me, before we started recording, that it doesn't feel like it's been six months. Well, do you mean that it feels like it's been seven years? You know, cannabis years are dog years, maybe even half years now, or-

Seth Adler: Yeah. All right, so just to kind of set the stage here. It was the lead up to January first, and then the lead up to July first, and then here we are. It's January, well it's January. Podcast land knows no time, but now that we've got a full year under our belts so to speak, I guess the key question to ask is what were the lessons learned from this first year. Then, maybe we'll get into what you're expecting for year two.

Lori Ajax: Yeah, lessons learned. Well, I think there's been a lot of them. We've had an industry that's transitioned into the regulated market, with all of our regulations, and a lot of changes for them, for us, for everybody, the public. I think the lesson for us going forward is, is we're going to have more consistency now with our regulations. Not this constant change. All of our phase-in periods are pretty much over, and I think everybody's looking at putting last year behind us and moving forward. Our focus is going to still be getting as many people licensed as we can this next year. Also, stepping up our enforcement of the illegal market.

Seth Adler: Yeah. Getting folks kind of ramped up, ready to go, and then working with them through the transition was really a lot of the focus. If I'm kind of another state, or maybe even another country, you know everyday it seems there's another country that's announcing that they would like to regulate cannabis. I wonder, besides the fact that you just have to figure it out, so there is always going to be a little bit of oh we need to add that, oh we need to remove that. To any regulation roll-out. What would you share with another state, what would you share with another country that's about to do what you just did for the first year?

Lori Ajax: Well, I would say get ready to roll, because it's not easy. Like I said, not just for the regulator or for the state, but also for the industry that you're trying to regulate. The biggest advice I'm going to say, what's helped us along the way, as difficult as things have been for the industry, always making sure we're including the industry in our conversations. Being open to feedback. The worst thing we could do is not to listen to what people say. Not listening at what's effecting their businesses.
I think that's the advice I'd give any state or country looking to regulate, is that you can't do it on your own. You need to work with the industry. Although we may not always agree on things, I think there's always that compromise, but you really have to understand their business and what your regulation is going to do to that business.