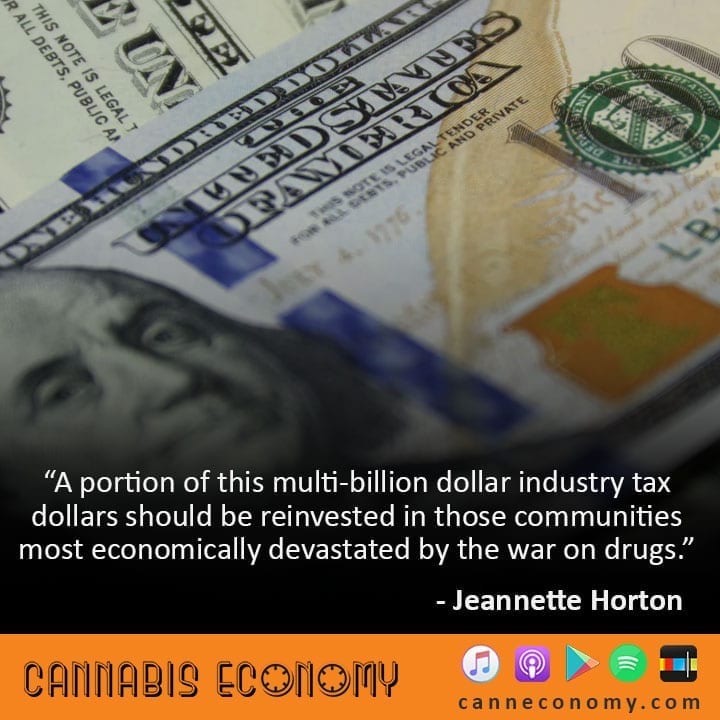 Jeannette Horton talks about the benefits that cannabis tax money can have by making investments in the communities most disproportionately harmed by the war on drugs. This money can fund expungements, job training, and businesses. But it’s often distributed to the wrong areas, so it’s important to have oversight to ensure that the funds are doing the most good by helping to right the wrongs inflicted primarily on minority populations.

Nicole Smith: New technologies are emerging that are really amazing, and it's allowed us to do more, right? I mean, the things that have evolved, that's one of the things that we currently talk about is that Evo as a company is almost a decade into CO2 extraction and technology development. That's a lifetime in this industry.

Seth Adler: Well, if cannabis years are dog years, which they are.

Seth Adler: Exactly, that's what they tell me. Exactly.
So, Jeannette Ward, thanks so much for giving us a few minutes. It's been too long. It's been so long that you're Jeannette Horton now.

Seth Adler: So, you've moved. I think when last we spoke, you were on the East Coast. Now you're on the West Coast.

Seth Adler: The only reason I bring that up is because this NuLeaf thing, it seems like a good idea. There's so many ideas that are good ideas, right now, in the cannabis industry. Right?

Seth Adler: Now, you were actually talking to, what was it? Coca-Cola, brand marketer, so it's not like you're just somebody with opinions. You actually know what a good idea is versus, you know.

Seth Adler: So let's just quick talk about NuLeaf, because I find it fascinating. I think it's great that you're doing that in Portland. It does sound scalable, I know that we're not focused on that right now, but what's the deal? What's the information that we need?

Jeanette Horton: The important thing for everyone to know is, Portland is the first city to invest money in the communities most disproportionately harmed by the war on drugs to invest cannabis tax money. California has gotten a lot of love for proposing it in their language, but it hasn't happened yet, and it's important that every city, every state make that kind of commitment with their cannabis tax dollars. This multi-billion dollar industry is profiting in tax dollars a lot of police forces, and it needs to be being reinvested in those communities most economically devastated by that war on drugs. Lots of people believe this, lots of people are on board for this. It actually practically happening the first time this year in Portland, when the money's actually showing up in these communities. NuLeaf was born from this. We are a nonprofit organization that gives funding, gives capital to businesses of color. We also have educational programs training, mentoring and just all around business coaching, for these businesses to help them scale, help them grow, and then we have a new professional arm which is for helping people of color find realistic successful career pathways as professionals in cannabis.

Seth Adler: Alright, so I want to kind of unpack all of this. First things first, how does it work in the city of Portland? How does the tax money actually get distributed? I won't say redistributed because that's a dog-whistle word.

Jeanette Horton: What does that mean, dog-whistle?

Seth Adler: It means that it has a meaning for certain people that means something like, it shouldn't have been redistributed.

Seth Adler: My money that shouldn't have gone anywhere else, so how is the tax funds being distributed from cannabis in Portland? Two communities just disproportionately just affected by war on drugs.

Jeanette Horton: So that's what makes this local advocacy so important, and when I talked about California, it's gotten a lot of love for what they said they were going to do. The devil is in the details. The question you're asking is very important. How that money actually gets distributed is a really important thing for you to understand, and every state or city government is taking a different approach, and usually, it's a convoluted approach, so this is to be quite frank, no different. We've got some great advocates within the city of Portland who are fighting for this money to go to the right places, but it's in a budget kind of allocation to the budget distribution that seems to be controlled at levels above department city planning.