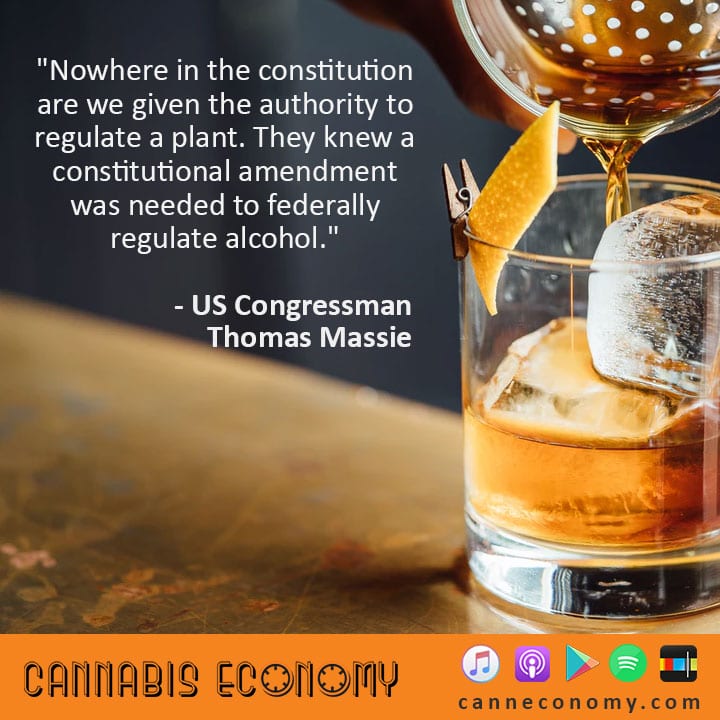 Congressman Thomas Massie of Kentucky explains his unique views on cannabis and hemp. His appreciation of the plant stems from the need for a tobacco-alternative cash crop in Kentucky and surrounding agricultural areas, and extends to other aspects of states rights and personal freedom. Massie doesn’t vote based on pure party loyalty, but rather goes by his values and those of the people who elected him. For him, this means considering constitutionality, affordability, and state vs. federal responsibility in all issues, including cannabis.

Seth: What about one-to-one?

Nancy: We really love our one-to-one products. We have a one to one capsule and we have a one-to-one gummy that we just released fairly recently. First of all it's delicious. It's a strawberry lemonade, but it has just taken off like a rocket and I think what people really love is the pain relief, and the calming nature of the CBD in combination with the THC.

Seth: Congressman Thomas Massie. Do you do prefer Thomas, do for Congressman Massie, do you prefer Tom?

Thomas: I go by Thomas.

Thomas: Does that sound okay?

Seth: I mean, how does it sound to you?

Thomas: Sounds like I'm in my bathroom over there.

Seth: Well you know, these are high ceilings here in, where are we, Rayburn?

Seth: Yeah, this is congress.

Thomas: So we need high ceilings.

Seth: This is the United States Congress, which is currently shut down by the way, have you noticed?

Thomas: A lot of people haven't noticed that. By the way, when you first get here-

Thomas: The ceilings are so high, and there's marble and mahogany and granite and you just pinch yourself and say, "How did I get here?"

Thomas: And then after about six months and you've met all your colleagues and you look around and say, "How did they get here?"

Seth: Yeah, there you go. I kind of now understand why I am here.

Seth: How I am here. Let's talk about cannabis before we forget to.

Thomas: I have some on my wall over there.

Seth: There it is. It's hemp is what you're talking about.

Seth: That fantastic. Kentucky, you guys do hemp.

Thomas: Yes we do-

Seth: So does it start there as far as your appreciation for the plant and the reason that you would be interested in anything that became law, as far as cannabis?

Thomas: Yeah, in Kentucky it's rope, not dope.

Thomas: But it's really interesting. We had an ag commissioner who wanted statewide race, and the thing that differentiated him from the other candidate was he was pro hemp.

Thomas: Now, you would think in the bible belt in Kentucky that could hurt you, but in fact, most of the older people could remember when hemp was grown on their farms.

Seth: From kind of WWII-

Seth: Hemp for Victory, that all that stuff.

Thomas: So Kentucky, I believe was the biggest producer, the biggest state that produced hemp back in those days.

Seth: Indeed, so it was almost a returned to-

Seth: What we used to be.

Thomas: And with tobacco going out as a cash crop-

Thomas: People used to make their mortgage payments on their farm with tobacco and that's not the case anymore.

Thomas: So they're looking for an alternative crop, and so this was one of the first things I did when I got to congress was to sponsor the Industrial Hemp Bill, which became an amendment to the farm bill in 2013, 2014 which became law.

Thomas: And now there are thousands of acres of hemp being grown in Kentucky.

Seth: There's one thing that happened that I'm sure that you're a fan of. Hemp, industrial hemp is no longer part of the Controlled Substances Act of 1970. That's what the farm bill and the hemp legislation specifically-

Thomas: Right. That's the new farm bill makes it even broader a path for hemp to be successful.

Seth: But you voted no.

Thomas: I voted no on that farm bill, that's right.

Seth: And here's the reason why.

Thomas: But I'm yes for hemp.

Thomas: These bills are 1000 pages long.

Seth: Just so that we get a sense of your mindset, what were maybe some other things that you weren't so crazy about, even if you were 100% for hemp?

Thomas: If we listed all the things in the Farm Bill I'm not crazy about.

Thomas: But I did vote for it in 2014, because it had the provision that was my provision in it. And I felt it would be disingenuous to get a provision in a bill-

Seth: And then voted against it.

Thomas: And then vote against it. Now, this farm bill, of course that provision that was in there is a derivative of something that I worked on but-

Seth: Far enough away that you felt comfortable.

Thomas: Yeah, somebody else wanted credit for it, and I was okay with letting them have credit.

Seth: And then there you go-

Seth: You can vote no. Also, You don't mind supporting our veterans.

Seth: So whatever we're doing with the money, if they're going there, we got to support them here. So, how is this a problem? How is supporting veterans, a thing that you and I have to discuss here in 2019?

Thomas: I don't think it should be a problem. Hopefully, it won't be.

Seth: I thought maybe you were gonna continue.

Seth: But when you speak to colleagues-

Thomas: I often confuse people that interview me because I answered the question and shut up.

Thomas: And I wait for the next question.

Seth: But what is it? How is the VA ... The reason I'm asking you specifically about these things is because the VA is part of our federal government, and I know that you're not really so thrilled with spending money.

Seth: From the federal government's perspective, but when it comes to the veterans, you do have a different perspective. And so if we can get you to spend money on veterans, why can't we get everyone else to spend money, aren't we all patriots here in the United States of America?

Thomas: I would hope so. And I think if you recognize the full cost and absorbed it in the federal government, and the taxpayer absorb it, of all of the foreign wars and interventions that we're still involved in, if we truly took care of our veterans the cost of war would be two or three times greater than it is right now. And hopefully, there would be fewer wars.