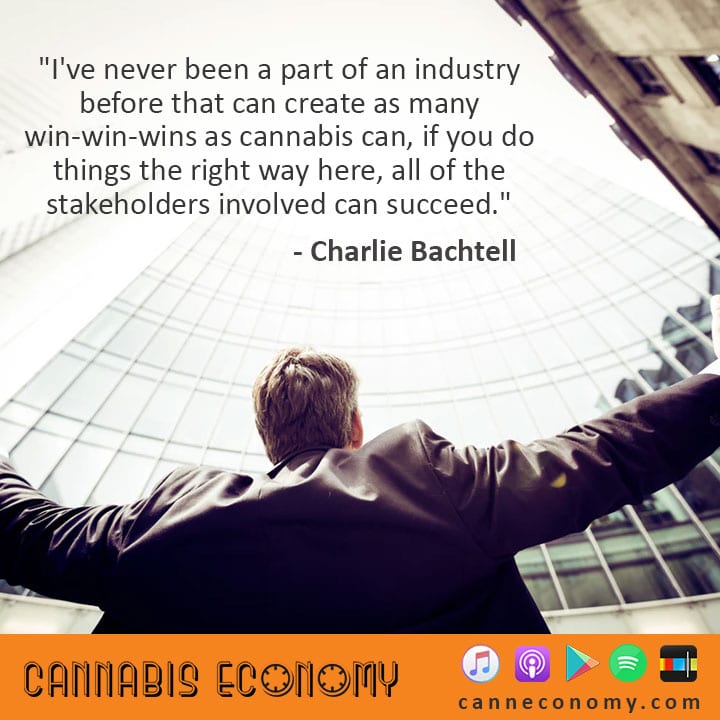 Charlie Bachtell joins us to talk about the cannabis space outside of the more classic states of California, Oregon, and Colorado. He has been part of a growing geographical footprint in Illinois, with the mission of normalizing and professionalizing cannabis. In Illinois, safety has been the main concern over other aspects like revenue, and the recent surge in cannabis-related data has helped prove its safety through allowing increased education. This opened up the conversation about cannabis and led to a solid medical program on which others are now based in different states.

Seth Adler: Charlie Bachtell joins us. Welcome to Cannabis Economy, I'm your host Seth Adler. Download episodes on Canneconomy.com, that's two n's and the word economy, or wherever you currently get your podcasts. First a word from Evolab and then Charlie Bachtell.

Evolab: The other really cool thing, we did do an agreement with Doctor Ben Cohen who is a pain specialist that is helping us design a pain formulation cream that will be used for athletes. I don't know if you are aware that, obviously, I mean this was I guess kind of old news, but WADA and USADA have both taken CBD off of the list of prohibited use items, and so we're going very heavily now after pain products for athletes and Doctor Ben is going to help us with that project as well.

Seth Adler: Charlie and, I apologize, but pronounce that last name.

Seth Adler: Oo, that's not what I came in thinking.

Seth Adler: No. I was hoping we were going to have a Charlie Batch conversation. The old Lions and Steelers, I think, quarterback, number ten. He never played for the Bears and that's why it doesn't matter, right? We're here in Chicago, thank you for having me in. Cresco labs. You guys are doing a fair amount of business here.

Seth Adler: Look at you! If you were Sweetness, if you were Walter Payton, that's what you would be doing. So you're a lawyer, and maybe we'll get into that, or at least were a lawyer, maybe a recovering lawyer, whatever it is. As we make our way into 2019 podcast line knows no time, but that's when you and I are speaking kinda towards the beginning of that year, what is Cresco Labs looking at. I'm sitting here at your desk but what are you most focused on?

Charlie B: You know, it's the continued expansion of the industry and our role in it. Clearly we're a multi-state operator, so the footprint, the geographical footprint has grown pretty significantly over the last year, and believe will continue to do so as we move forward in nineteen. Mission of our company, which I think speaks to the industry as a whole is to normalize and professionalize the cannabis space. That was the opportunity that we saw, and that was the aspect that we thought we could bring something to that conversation. We could help draft that narrative, so that's why we got into the space in the first place.

Seth Adler: We're talking about I guess the total addressable market, and especially in states that have limited licenses. There are a number of players, number of MSOs that have your exact kind of outlook: that's exactly what we're trying to do, forget about California, Oregon and Colorado, go forth into the other states and let's try to make some hay, so to speak. Or hemp, for those that are participating in that market. Give us a sense of competition. This is a brand new market, the consumer is still being defined. From my point of view, I have the pleasure and honor of speaking and talking to you guys, so it seems like it must be very competitive, but it also seems like it must be endless, as far as the market itself.

Charlie B: There's a couple points there, so to your point, sure it's competitive, but it's incredibly collaborative and I think that's what surprises a lot of people that aren't necessarily in the highly regulated markets. We all have to get along, we all have to do this together. You have to have a program first, patient first, or customer first focus because without the programs it doesn't matter how good your packaging is, it doesn't matter how good your messaging is. The program has to be successful, so we find ourselves often working with our peers. We really don't even refer to each other as competitors and as much we refer to as peers, we coined a phrase called coop-etition, and there's plenty of coop-etition in this space. Needs to be.