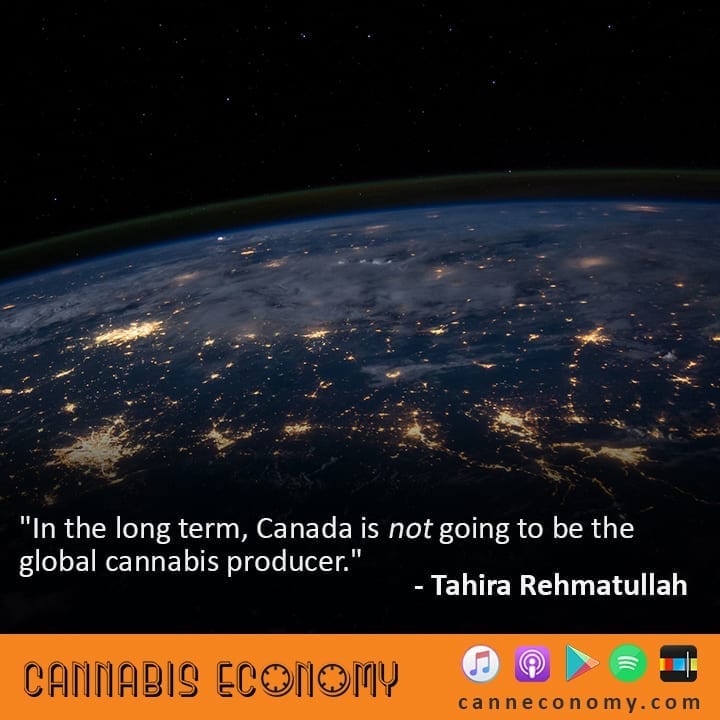 Tahira Rehmatullah is in impressive leadership positions at not one, not two, but three major cannabis companies – it is no surprise that she has plenty of nuanced insights about the business side of the industry. For example, she notes that larger companies have been strategically diversifying their revenue streams in order to stay afloat amidst competition and fluctuating tides. As well, she believes that it is only a matter of time before countries stop importing products from Canada and start self-producing at half the price. Besides business, Rehmatullah predicts how medical cannabis might eventually look in the U.S. and shares her predictions for the 2020 election.

Seth Adler: Tahira Rehmatullah joins us. Welcome to Cannabis Economy. I'm your host Seth Adler. Download episodes on Canneconomy.com or wherever you currently get your podcasts. Canneconomy.com, that's two N's and the word economy has a ton of direct insight from science, policy, and business leaders in the space.

Seth Adler: First a word from MedMen and then Tahira Rehmatullah.

Seth Adler: MedMen continues to expand its footprint on the cannabis landscape, opening new stores in Los Angeles, Las Vegas, and the iconic Fifth Avenue in Manhattan. They've also opened a 45,000 foot high tech cannabis cultivation and manufacturing facility in Nevada. The company has reached a $1 billion valuation, making it the country's first cannabis unicorn, and it's just the beginning. Learn how MedMen is building the future of cannabis today at MedMen.com.

Seth Adler: That is where there's the difference in age because do you know what that AV team calls those microphones?

Seth Adler: Yeah. That's a Madonna. But you call it a Britney Spears mic.

Seth Adler: Do you see that?

Seth Adler: No, I don't know that.

Seth Adler: See, my references Slash the guitarist of Guns and Roses holding a snake.

Seth Adler: That's where we are.

Tahira R.: Sure. Okay. I feel like I straddle the divide, but okay.

Seth Adler: Yeah. So I call you Generation Y.

Seth Adler: Because you're not Generation X.

Tahira R.: I'm not. Well, the call us Millennials.

Seth Adler: But you're not that.

Tahira R.: I agree, but if you look at the definition, the years for Millennial, it's often '82 is the starting year. I'm like that is false because Millennial, the '82s are like close to 40 now.

Tahira R.: I was like there's nothing similar between someone who is 37 and 27.

Tahira R.: Unless it's Morgan Paxia.

Seth Adler: So I think I finally ... Tahira Rehmatullah. I think I have it down finally.

Seth Adler: I did, right?

Tahira R.: Yeah. You did great.

Seth Adler: I had gotten it wrong for years I think.

Seth Adler: We know each other way longer than this is now, and here you are.

Seth Adler: And we happen to be in Israel.

Seth Adler: And you happen to come here from-

Seth Adler: So we're going to get to that.

Seth Adler: We'll leave that for a minute because let's just do the thing, right?

Seth Adler: Let's do the thing.

Seth Adler: What are you working on right now? Yeah, here we go.

Seth Adler: Do the short version because if anyone senior name, they know the story. So short version for people that don't know.

Tahira R.: So short version, okay. Just launched Hypur Venture's Two, significantly larger fund that we're just kicking off and plan to invest across the supply chain brands. We also have a portion for ancillary and looking a bit international. But we are gearing it towards some day institutional investors and prepping for that shift in the market. But also very much looking at M&A consolidation, the potential, I think strong potential for distress coming down the pipeline.

Tahira R.: So that's probably the most pressing item, and then have taken on a couple advisory roles. So working with the initiative, female business accelerator out of Portland run by Amy Margolis, also a senior advisor along with Emily Paxhia, Treehouse Global Ventures, a women's founded fund focused on female entrepreneurs in the cannabis space. Then a couple of other great brands and projects that I'm working on.