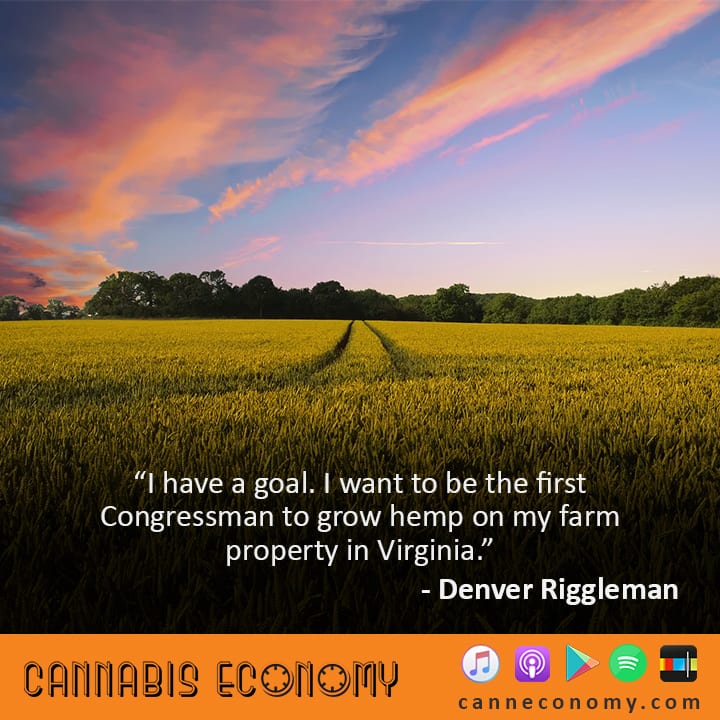 Denver Riggleman joins us and shares his thoughts as to how to advance cannabis legislation by giving the states more power: “I think we need to get in front of this and I think we’re to a point now that we need to let the economy work, get the federal government out of the way, and let the states dictate how they want to deal with cannabis.”

Seth: U.S. Congressman, Denver Rigglemann joins us. Welcome to Cannabis Economy, I'm your host Seth Adler. Download episodes on canneconomy.com, that's two n's and the word economy. We've got a ton of direct insight, as well as a digital workshop coming up, featuring business, science and policy folks, speaking about what is and what should be happening now, in cannabis. First word from MedMen and then U.S. Congressman Denver Rigglemann.

Seth: MedMen continues to expand its footprint on the Cannabis landscape, opening new stores in Los Angeles, Las Vegas, and the iconic, Fifth Avenue in Manhattan. They've also opened a 45,000 foot, high-tech cannabis cultivation and manufacturing facility in Nevada. The company has reached a $1,000,000,000 evaluation, making it the country's first cannabis unicorn, and it's just the beginning. Learn how MedMen is building the future of cannabis today, at MedMen.com.

Denver Riggleman: Well, unless I'm losing my voice, which can happen.

Denver Riggleman: Yes I am.

Seth: Before the microphones were on, we already discussed the fact that even though you're from Virginia, I keep trying to put you in Colorado, for obvious reasons.

Denver Riggleman: Yeah, first name of Denver. I don't think there's a lot of people who've had that first name in Congress, I might be the first in history so at least I got something.

Seth: Look at that-

Denver Riggleman: I don't think there's been a Denver Johnson, or a Denver Hamilton- [crosstalk 00:01:29]

Denver Riggleman: Denver Madison [crosstalk 00:01:32]. Well James Madison was the first congressman from my district, so our district goes back to, I think, March 1789.

Denver Riggleman: So James Madison was the first congressman of this district, so-

Seth: Ended up pretty good for him, right? Number four-

Denver Riggleman: Yeah, he had number four and he beat James Monroe-

Denver Riggleman: -for that seat. So, there's a lot of history in our district.

Seth: There you go, and then Monroe came back?

Denver Riggleman: Yeah, he came back-

Denver Riggleman: -number five so you know, there's a bunch of Virginians that were fighting each other, that ended up doing all right.

Seth: Yeah, right at the beginning there, you guys were at the top of the bill, let's be honest.

Denver Riggleman: Yeah, he got in the way, dang John Adams. We're coming back though, we'll have another Virginian President sometime, I think.

Seth: There we go, don't call it a comeback, right?

Seth: So, you are cosponsoring both the STATES Act and the SAFE Banking Act. These are two bills that are most popular across the board. If I look at the political spectrum [inaudible 00:02:38], it really doesn't matter where you fall on that political spectrum. You could be a cosponsor of either of these bills.

Denver Riggleman: Yeah, and I think what you're looking at is it is a freedom thing, but when you look at both of these bills, they're a little bit different.

Denver Riggleman: With the STATES Act, it actually allows the state to do what they need to do with marijuana without, sort of federal insertion, of certain things. On the SAFE Act, it actually precludes federal investigators from pursuing banks that actually deal in cannabis or cannabis-related banking. So, you have two separate bills that I believe sort of start to ...

Denver Riggleman: Listen, I think all but three states have either cannabis-related legislation for medical marijuana, recreational marijuana. I think we need to get in front of this and I think we're to a point now that we need to let the economy work, get the federal government out of the way, and let the states dictate how they want to deal with cannabis. There's a lot of confusion at the federal and state level with what we are supposed to do with marijuana. I think we need to start simplifying this and let's not make people criminals that shouldn't be criminals, especially those in states where they may be some issues based on federal statute, the scheduling of the drug itself, let's do the right thing.