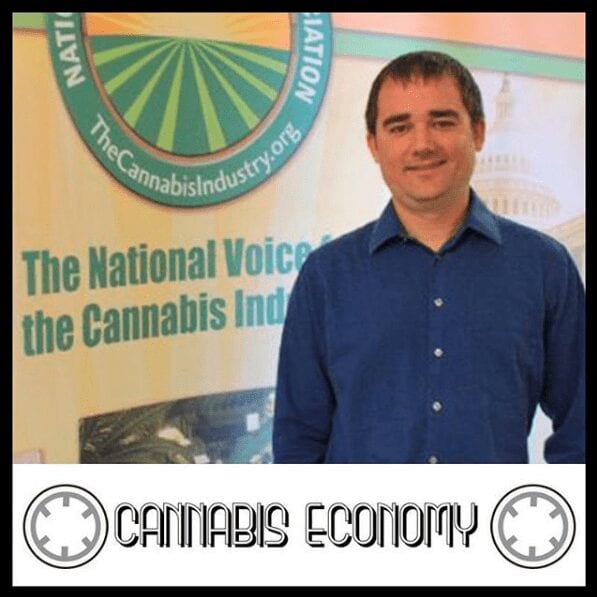 September 8, 2016
With a dip back in history to Aaron Smith’s first visit on Episode 7, we continue to the present as it’s high tide for Aaron and the NCIA as Lobby Days just occurred in DC and the Cannabis Business Summit is coming up in Oakland. Aaron takes us through the activity in DC and key wins from Lobby Days. Aaron also talks through some key sessions coming up at the Cannabis Business Summit. And if you have 4 seconds, we’d very much appreciate you filling out our survey at survey.libsyn.com/canneconomy

Speaker 2: was episode seven, way back when Aaron came on and kind of introduced himself to us. We introduced ourselves and he gave her a real poignant story and it really sets up a where we are now by going back to where we were and where he was then. And if you

Speaker 1: don't mind, I'd love to get into what did happen when you were a teenager, as much as you want to share with us a, a, a, you know, because it'll inform us as to why you're such a, a, a, you know, a big part of the movement, uh, and a passionate part of the movement. And the other thing is, uh, it might help other folks that are facing the same type of thing that you faced. So you mentioned, uh, you know, uh, running with police and uh, I think even use the word brutality. How much can you share with us about what happened?

Speaker 3: Yeah, it's not something I talk about a lot, but I'm sure you know, I, I was, uh, uh, you know, kind of an awkward. I'm goth kid with dark hair and makeup and a black trench coat. This was pre columbine. Um, and I, uh, was in a fairly small town in Sonoma county where I grew up, which I'm actually, you know, I thought I knew all of the police officers that really regularly patrol the area as, you know, as teenage kids do. I was out about many nights. I'm a but an officer actually pulled up, um, to me when I was walking down the street and jumped out of his car, yelled a lot of profanity at me and, you know, basically, um, you know, told me to put my hands on the hood and I did a, he wouldn't tell me what, you know, why he was stopping me.

Speaker 3: Um, and at some point, somehow along the line, I ended up getting hit in the head and thrown to the ground. Um, next thing I know, I woke up hog tied in the back of a vehicle of the, of the police vehicle. Um, and what had happened was he had strangled me until I associate it's fixated and passed out my, the blood blood vessels in my eyes burst. So I had really super blood red eyes for a weeks and weeks after that. Um, and, you know, when I ended up getting taken to a hospital where I was drug tested against my without even actually, not against my will, but without even a warning, I was down tied with my arms behind my back on him on a stretcher and they just stuck a needle in my arm without even saying anything. Um, and then, uh, they, you know, I didn't have my id on me because I was not driving, um, and I was a kid, didn't care my id.

Speaker 3: I did have a small amount of marijuana on me, like maybe a gram or half a gram. And then that was kind of, you know, what they ended up using to justify what they did. Um, they, they found out I was a minor. Um, eventually they believe me and they called my parents who came down with my id. Um, and at that point I could tell they kind of freaked out because they think they thought I was older than I was. Um, you know, it's illegal to drug test minors without their consent. Um, so I received, I actually did not get charged with any crimes, uh, at all, uh, because I mean, and, and marijuana is decriminalized in California anyway, although I was a minor, um, but they, you know, I think that it really was a transformative time in my life where I really started seeing, um, the, uh, the brutality of government and that, you know, while I believe that there is a role in government for government, um, it's always really important to understand that whenever we're using government to achieve our social means of any kind, it means we're using force because that's really the only thing that government has a monopoly on.

Speaker 3: Um, you know, the government's the only a entity in the country that can legally a hurt people and kill people and throw people in cages for not doing what the government wants them to do. Um, and, you know, and that all that I think that, you know, that's a when you can, when it comes to things like national security and, and, you know, keeping violent people off the streets, I think that's entirely appropriate. But when you're talking about a victimless crimes like drug crimes and certainly a marijuana crimes where, uh, you know, we were talking about a natural substance that's safer than then, you know, most most, uh, prescription drugs and certainly safer than alcohol. Um, it absolutely makes no sense to a, to be using the force of government to, to keep, keep people from using the substance. And so I, you know, I think that inspired me to get involved in the libertarian freedom oriented side of things as an activist and then, and, and especially, uh, the war on drugs, you know, as I mentioned, I think is a, you know, one of the, you know, the biggest, one of the worst violators of human liberty and certainly one of the worst domestic policies in our country right now.