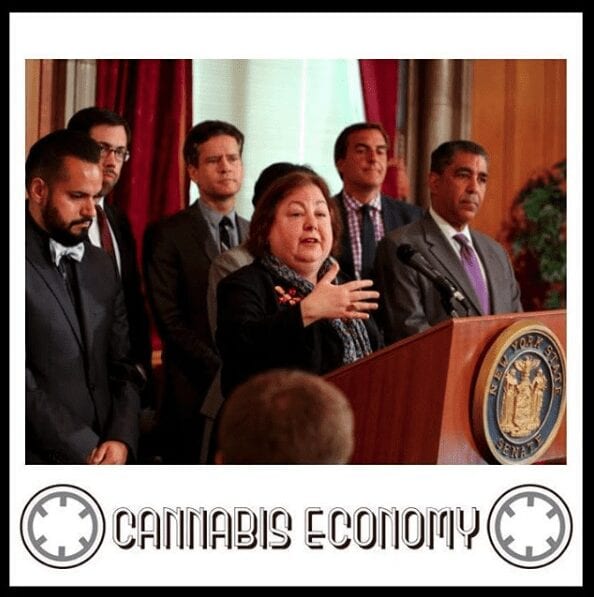 April 25, 2017
New York State Senator Liz Krueger & Aaron Smith, NCIA
New York State Senator Liz Krueger joins us to share her thoughts on the fact that we the people have a civic duty that extends beyond simply voting. Senator Krueger shares how very seriously she takes constituents that make their voices heard to her. She plainly states that if you are in her district and can vote for her…or worse, against her- she will listen to your point of view. Senator Krueger then shares exactly what’s in her adult-use bill for New York State and where we stand on the timeline of getting it passed. But first Aaron Smith returns to share the fact that priorities did indeed need to change based on the incoming administration. Whereas initially there was hope to move the ball forward, the plan now is to not cede any ground in the effort to legalize cannabis.

Speaker 1: State senator Liz Krueger and Aaron Smith, New York state senator Liz Krueger joins us to share her thoughts on the fact that we, the people have a civic duty that extends beyond simply voting. Senator Kerger shares how she very seriously takes constituents that make their voices heard turn. She plainly states that if you're in her district and can vote for her or worse against her, she will listen to your point of view. Senator Krueger then shares exactly what's in her adult use bill for New York state and where we stand on the timeline of getting it passed, but first Aaron Smith returns to share the fact that priorities did indeed beat to change based on the incoming administration, whereas initially the results to move the ball forward to plan now is to not see any ground in the effort to legalize cannabis. Welcome to cannabis economy. I'm your host Seth Adler. Check us out on social with the hand mechanic economy. That's two ends and the word economy, state senator to Liz Krueger and Aaron Smith.

Speaker 3: Aaron Smith, the NCIA. Welcome back, my friend. How are you?

Speaker 4: Great, thanks. Thanks for having me, Seth. It's always a pleasure.

Speaker 3: Absolutely. Happy New Year. Did you get to go away at all or

Speaker 4: some little bit of r and r between the Christmas and New Year's and amped up and ready to go for 2017 now.

Speaker 3: Yeah. So 2017. Here we go. I know that, uh, of course there's always a plan. How much of a wrench, um, did this, uh, kind of change at the top? In other words, I think everybody, no matter your political stripes felt, uh, you know, the presidential election was going to go one way and obviously went another. Um, how much did that change? You know, what you're doing, what effect did that have on the past month and a half and next month and a half before he actually hit hit your stride in 2017.

Speaker 4: Me Or organizations by surprise. It did. And we did have to readjust our priorities here and this, especially here in the short term. While we were anticipating coming into an administration that were, it was a given that the Cole memo would remain in place, which is the Department of Justice memorandum issued in 2013 that essentially laid out some guidelines for what state legal marijuana business, uh, needs to do in order to, uh, run, not run afoul of federal law enforcement and, um, that, that memo is absolutely critical for our industry. Uh, and because of the new administration, and not because there's any necessarily opposition from trump, but because there's so much uncertainty, uh, are now our number one priority is preserving the Cole memo. Uh, if it, if Clinton was the next president, uh, it's probably the number one priority would have remained a banking reform and, you know, to eat,

Speaker 3: but instead we're, you know, let's keep the ground that we've gotten as far as the sessions' confirmation hearing, you know, key takeaways from that. I, I kinda got the sense of I'm not going to go crazy, uh, although I'm not necessarily going to do nothing. So I'm somewhere in the middle, uh, which is, uh, which is not great.

Speaker 4: It was pretty vague answers out there, the sessions hearing what was most important takeaway is what he didn't say. Somebody, you know, somebody who is well known to saying things like, good people don't use marijuana. A staunch opponent of, of marijuana reform could come into that hearing to a fully Republican controlled committee chaired by Senator Grassley, who was also staunchly opposed to cannabis policy reform. Indeed, he could've, he could've put a big smile on the chairman safe by saying, I'm going to reverse the Obama policy and we're going to crack down on this, on this marijuana industry. Uh, and he didn't say anything like that at all. You know, he kept very vague. Uh, he said that the Cole memo actually had provided some value and was helpful to the DOJ, uh, on one hand. And then on the other hand, he did say what, uh, you know, with every attorney general nominee by the way has said, which is that it's not the doj job to make laws.