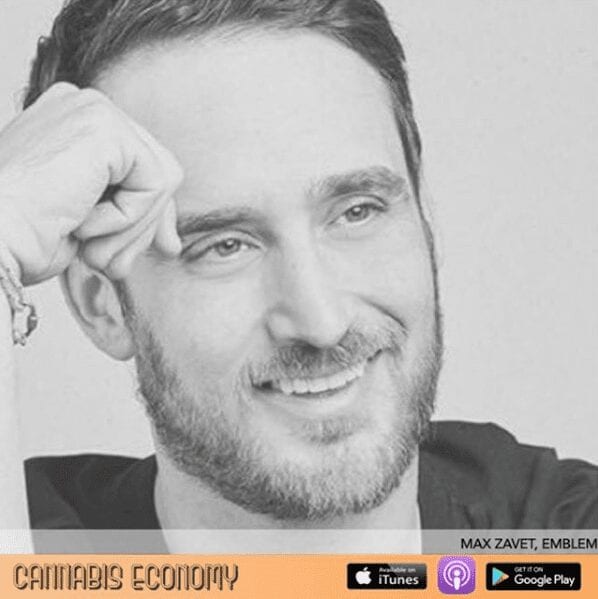 From an undisclosed location in Toronto, we have a casual conversation with Max Zavet, the CEO of a publicly traded licensed producer in Canada. As an introduction, he discusses the Emblem logo which features Artemis the greek goddess of nature, but we move into a conversation about the licensed producer community in Canada and how Max and his partners were early entrants into legal cannabis- they were the 15th group. Max explains how back in 2012 he was reading press releases on how the government was considering changing from a grow your own system- the MMAR- to the more tightly controlled and regulated system we have today the MMPR. He was dead set on being involved, and he found a way to do just that.

Speaker 2: from an undisclosed location in Toronto. We have a casual conversation with Max Zappa at the CEO of a publicly traded licensed producer in Canada as an introduction and he discusses the emblem logo, which features optimists, the Greek goddess of nature, but we move into a conversation about the licensed producer community in Canada and how Max and his partners were early entrance into legal cannabis. They were the 15th through Max Explains How back in 2012 he was reading press releases on how the government was considering changing from a grow your own system, the NMA, or to the more tightly controlled and regulated system we have today. The MMPR, he was dead set on being involved and he found a way to do just that. We're going to cannabis economy. I'm your host Seth Adler. Check us out on social with the handle can economy. That's two ends of the word economy. Maxavenue. Suitable both. Now you've

Speaker 1: got four eyes on you, man, because you talk with your hands is what it is a little bit. Yeah. No, but it's stupid. Like the whole political thing is, is dumb. I'm sure of it. And, and here's how I know this right? I've now, here's why I think that I've now I, I read a spectrum of news, so I got my Apple News App, right? And, and everything goes in all the way left all the way right in the middle over here, over there. I read it all and I'm quite sure that most of the people that are giving me information about what's happening every day in the, what do we call it, news are just trying to like, uh, you know, get me crazy one way or the other. Just poke. Yeah, they're just poking me. That's all. Who are the winners and losers from today? What happened today? That's what I'm looking for. Max. Thank you for allowing me to a rant before I even introduce you. Max Zavidow, correct. I mean, that's a good name. Come on, you got an x to Z, you, it, you got

Speaker 5: three syllables. Maxavenue, although believe it or not, um, you know, when you were picked, uh, uh, to be on the baseball team or the hockey team in school or, or, or it was a, you know, you were picked for anything in class. Uh, having the letter z was a awful for teachers that went out in alphabetical order and sure, but it wasn't too bad when teachers alternated between, uh, between alphabetical and the reverse. Right. So backwards alphabet Max's first today. So I had some of those teachers and call them a more democratic ones and there wasn't so bad then because I'm Adler. I was always at the front. You got it. I graduated and I graduated third in my class. Congrats. Well because of Jennifer Cardy and Marnie Adler, right? Nothing to do with grades. No, definitely not. I was further down as far as that's concerned.

Speaker 5: Now, same here. We are here in Canada. I like to affectionately call it Canadia. And by the way, you multiple times said Z and not said. Are you considering your audience? I am. Okay. So it's a zed y, y, zed. That's the airport said. Yeah. I just want to make sure. So it said a V, e t? Yeah. I often say it's a zebra, apple, victor, Edward, Tom, which of course it is, which of course it is if you're an air traffic controller, uh, your colleague, Lupita, who's wonderful, has just brought us water. That was parched. I mean, this is just wonder, but she brought me one or two. I mean, come on once. Exactly it. And that'll be it by the way. So you'll hear it later. So what are you doing here? Um, well, I've been graciously invited by you to come and talk about cannabis and.

Speaker 5: Oh, I don't mean like hearing. Oh, okay. Okay. How did you just show up with that microphone in your head? No, no, no, no. Emblem health. What do we need to know? Um, what do you need to know? Well, I think we're one of the most exciting, uh, licensed producers in the marketplace today. We're a publicly traded company. Take that Bruce Linton. Yeah, you got it. We got a three main verticals. We have a high quality flour production vertical that will merge or, um, uh, evolve into the adult use market flower production. We'll talk a little bit more about that later. Would you call that craft cannabis? Um, I would call it high quality cannabis. Why are you not calling it craft cannabis? Craft cannabis generally is a moniker we give smaller operators and we're going to be a pretty large operation, but we will be employing a grow methods that are similar to what craft growers do because we'll grow in smaller scalable rooms. Craft cannabis at scale. You got it. So by the way, pay it forward. That's for you guys, but you have to credit me. So it's craft cannabis at scale by Seth Adler and emblem. Maybe we'll have a sep adler strain.