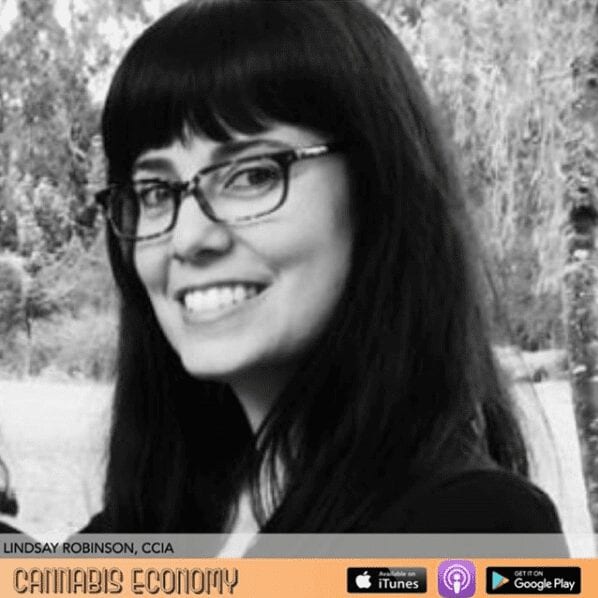 The long time industry activist and advocate and brand new Executive Director of the California Cannabis Industry Association, Lindsay Robinson shares that when she was still with the MPP, she joined the board of CCIA. After a year and a half, once her work with MPP was wrapped up and as former ED and guest Nate Bradley moved into full-time lobbying, Lindsay came on as ED. She learned her advocacy skills from her mother As a kid, Lindsey stuffed envelopes, picketed and protested. She readily admits to her formative years being about bucking authority, causing mischief and sass talking, a lot of sass talking. And now the industry is happy to have her doing just that on it’s behalf.

Speaker 1: Lindsey Robinson, the long time industry activist and advocate and brand new executive director of the California Cannabis Industry Association, Lindsay Robinson, chairs that when she was still with the Mpp, she joined the board of CCIS after a year and a half once or worked with MPP was wrapped up and as former Ed and guest nate Bradley moved into fulltime lobbying. Lindsey came on as Ed. She learned her advocacy skills from her mother as a kid. Lindsay stuffed envelopes, picketed, protested. She readily admits to her formative years being about bucking authority, causing mischief and SAS, talking a lot of sas talking, and now the industry is happy to have her doing just that on its behalf. Welcome to cannabis economy. I'm your host Seth Adler. Check us out on social with the handle can economy. That's two ends in the word economy, Lindsay Robinson, the other ones were snippets at arm wrestling matches and random other events. Donate, donate, donate, donate. Right. Definitely a hard fundraising push most of the time. Well, let's just start there I guess. Right. Congratulations my friend. Thank you. The brand new executive director of CCI. Yup. Yup. So I, when I saw the news after maybe it had been whispered, I, you know, this makes sense, right? So where can folks go to donate to the, uh, California Cannabis Industry Association so that we get it right out of the way, right? Yeah. You can visit our website. Yeah. California Cannabis Industry Association and it ca a cannabis industry.org. And you know, we, most

Speaker 2: of our money that we generate comes from our members. So if folks donate slash join, they actually get quite a lot in return that were gum. So it's not just a, a strict donation. Um, you know, we're, we're, we hope that folks will, will want to join as members and we'll get to what they get. But do I have to be from California? No, not at all. Um, we definitely have folks that are from Colorado and Washington now, they may have some type of business interest or pretend a potential interest down the road, um, but CCIE focuses on representing our members in Sacramento and as we're building a, the laws right now in the regulations around what the cannabis industry is really going to look like in, in California. Um, if people want access to that or have an opinion about that, uh, we encourage them to join when these conversations between Lindsey and CCI, kindness first started for whatever along the way.

Speaker 2: When did you guys, you know, them and you both realize, wait, we should really do this, this is a good idea, you know, because of x, y, and z. what, what was it, how did you come together here? Yeah. You know, I've lived in California for a really long time and I care very deeply about, um, what happens in the state. Uh, and, and, you know, cannabis policy is no exception to that. And so I actually joined the board of directors, um, uh, when I was working with the marijuana policy project, I joined that kind of on my own representing Mpp, but, you know, I, I, I got to sit on the board, which was a huge honor and a great opportunity for me to, to dig in a little bit on the development of the laws in the state. So I sat on the board for about a year and a half years or dog years.

Speaker 2: So that's about 10. Exactly, exactly. Uh, and it was a really exciting time. I started in January 2016 and then in about January, February of this year, um, the, the conversation started opening up about CCI needing a new executive director and I was immediately intrigued by it, but, you know, the conversation took a little while to develop. Um, mostly because I wanted to make sure that my current position with MPP, that I had really taken the time to wrap up the projects that I had been working on there. And so we kind of started talking about it a few months later. Um, and you know, it moved fairly quickly, which I think almost everyone involved felt that it was a really good fit, which I'm super grateful for and yeah, so, you know, we, we did a slow leak. We certainly, you know, we told I, I told the MPP staff and they knew and then obviously we told the CCA and the NCIA staff, but then it sort of started to trickle around and you know, a few weeks later we made it an official announcement and you know, the, the, the response has been overwhelmingly positive.

Speaker 2: Did you find out about all of the Lindsay Robinson fans that you maybe didn't know about? Well, you know, typically as a fundraiser you don't necessarily have a lot of fans. Everyone's afraid that you're going to come and ask them for money, which is true. And which by the way, the next time I walk up, yes, that's what I'm asking you for. Yeah. Yeah. You know, I've, I've been in the industry a long time and I've built some really great relationships and a lot of those people have been, you know, in a professional capacity. But also our mentors and teachers and people I've learned so much from over the years, especially people who have been in the, um, you know, on the, on the true industry side and, and been building companies and because I've been on the nonprofit side the whole time, so that's, you know, that that's been a huge learning curve for me, which has been great.