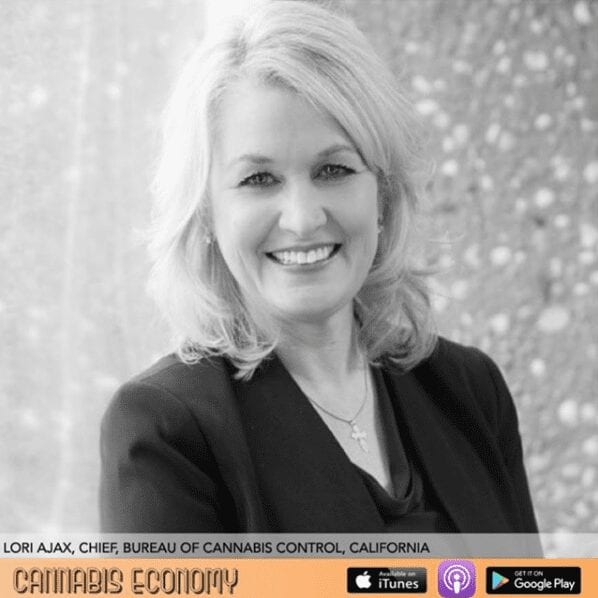 California’s Chief of Cannabis Regulation Lori Ajax joins us in a two part interview to share what’s happening with California Cannabis Regulations. In the first part of the interview, recorded in Sacramento California, she notes that she has monthly meetings with all state agencies involved in cannabis regulation. Lori feels that all of California’s involved State Agencies realize the importance of cannabis legalization to the state. She notes that each of the agencies needs one another to ensure success across the board. In the second part of the interview Lori shares updated branding information as well as online resources available to the industry.

Speaker 2: California, is chief of cannabis regulation. Lori Ajax joins us in a two part interview to share what's happening with California cannabis regulations. In the first part of the interview recorded in Sacramento, California, she notes that she has monthly meetings with all state agencies involved in cannabis regulation. Laurie feels that all of California's involves state agencies, realized the importance of cannabis legalization to the state. She notes that each of the agencies needs one another to ensure success across the board. In the second part of the interview, Laurie shares updated branding information as well as online resources available to the industry. Welcome to cannabis economy. I'm your host Seth Adler. Check us out on social with the handle can economy. That's two ends of the word economy, Lori. Ajax. Absolutely. So I mean, you know,

Speaker 1: where do you want to begin as far as how we're doing on our way to January first for instance, what was your day like today? Well, like every day it's, it's, it's very busy.

Speaker 3: Uh, we did meet with all, uh, all the state agencies that are involved in somehow involved with cannabis, so we have monthly meetings with them to brief them on what we're doing, to hear what they're saying just so we're all on the same page and we're all headed on the same path to January one of 2018.

Speaker 1: Okay. And it sounds like you guys are actually working well together, which, uh, you know, for anyone outside would think, well that can't possibly be. What do you think the key is here? Is it just because we know that this is a such a big deal and know that this is such a big opportunity or is it your management? What, what might it be?

Speaker 3: I think it's a few things. One, everybody, all the different state agencies realize how important this is to California. So we all understand that and we actually, I think we need one another to make sure we're all successful. So I think that's the big thing. We have to do this together. It's not just about the bureau. Yes, we're the lead agency, so we're coordinating this, but really we need, we're in this together so when we all want to be successful

Speaker 1: as far as success is concerned, what if folks need to understand as far as what you're doing, what is success?

Speaker 3: So success is, is that we're issuing licenses on January one, 2018 for the short term. Obviously, you know, longterm it's getting folks into the regulated market. But for January one or uh, they were talking to the industry about how we're going to accomplish that. We planned to have our regulations issued sometime probably mid to late November, then the next month in December, accepting applications and then January one issuing the temporary licenses. And so we have some information on our website on what information we're going to be requiring in order to issue a temporary. But I think the big thing for folks to know is that in order to get a temporary you have to have local approval from the city or county where you're conducting cannabis activity. And so for us is making sure we can issue as many temporary. So those folks that are in compliance with the locals,

Speaker 3: well, you know, we have some local municipalities that have a Rhombus, a cannabis, a licensing system, and then you have others that have outright banned it and then you have the ones in between that are still trying to catch up and then they're also, you know, want to know what we're doing and you know, it's understandable. They're used to the state taking the lead on things and right now they're waiting to see what is the state going to do because I think in some ways they want to look at what we're doing and then at least incorporate that in their own ordinances. So you've got a mixture out there

Speaker 1: so that it does make it difficult, right? Because you're saying we need to know that you're okay locally and local is saying, all right, well what's happening at the state? So how do we do that dance? I guess what if I'm an operator because that's most of the listenership anyway, what do I need to be doing to, to help my local municipality or you know, how would I bridge that gap so to speak?

Speaker 3: Right. So you want them to obviously to reach out to that local municipality. We were doing that too from our end, but if there's somewhere like a city or county that maybe doesn't have this information I'm providing today, maybe directing to our website, directing them to us, we're happy to answer questions because they think it's really important for the listeners to know that we can only issue those temporaries in those areas that are allowing for it. Right. And it's also important to know if they're dealing with, you know, if they're getting their product from a cultivator that won't be able to get that local approval and won't be able to get that temporary license, they need to start thinking about that now because once we issue that temporary to, let's say a retailer, they can only deal with other cannabis licenses at that point. So they've got to start looking at who they're getting their product from, who they're dealing with business wise, and making sure they also can get that temporary license.