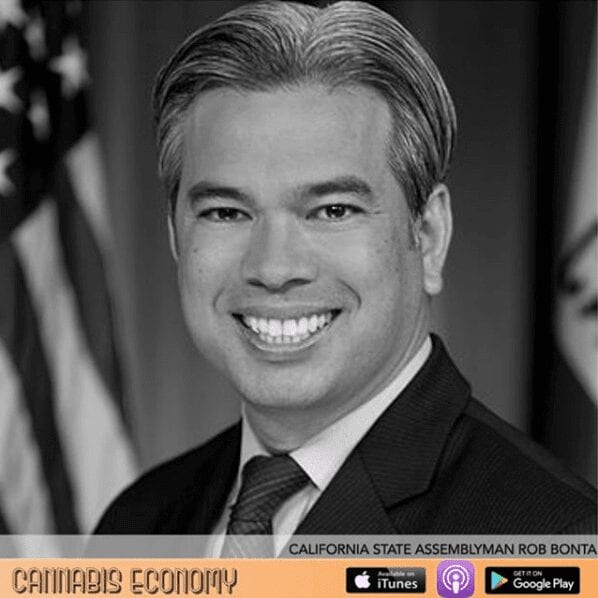 In a two-part interview, California Assemblyman Rob Bonta joins us. In part 1 recorded at his office in Oakland, he shares why when we had Prop 215 in place we needed MCRSA. He notes that for nearly 20 years there was no regulatory framework to protect the health of the patients and to guard against diversion. It wasn’t because it hadn’t been tried, it tried and failed. As the Chair of the Assembly Health committee, his goal was to make sure that everyone had true access to high quality affordable healthcare. In part 2, Rob shares what’s happening on the ground in the lead-up to Day 1. And shares the reconciliation process between medical and adult-use legislation.

Speaker 1: Rob Bonta in a two part interview, California assemblymen. Robert Matsui joins us in part one, recorded at his office in Oakland. He shares why when we had prop 2:15 to place we needed EMC Rsa. He notes that for nearly 20 years there was no regulatory framework to protect the health of patients and to guard against diversion. It wasn't because it hadn't been tried and tried and failed as the chair of the Assembly Health Committee. His goal was to make sure that everyone had true access to high quality, affordable healthcare, and for to rob shares what's happening on the ground in the lead up to day one and chairs the reconciliation process between medical and adult use cannabis economy. I'm your host Seth Adler. Check us out on social with the American economy. That's two ends and the word economy. Rob Bonta, right. So we've got a quick few minutes

Speaker 2: now. This will be part one and part two. Part one is we had 2:15 in place in California, yet we needed MML, Rsa. The question being why? Because for nearly 20 years we didn't have a regulatory framework to protect our environment, to ensure the health of our patients and to guard against diversion to nonlegal uses of cannabis that all needed to happen and, and it wasn't because it hadn't been tried before, right? I haven't tried multiple times before and failed. And so we set about to do something in a different way that was very needed and that, that folks up and down the state had a vested interest in. And for me, I was the chair of the Assembly Health Committee, the, you know, my goal as, as the chair and my goal as a legislator now as no longer the chair, but someone who cares deeply about the healthcare of all people are all in our, in our state and our nation is to make sure that folks have.

Speaker 2: Everyone has a true access to high quality, affordable healthcare and you know, patients need their medicine and, and the state approved cannabis as a medicine for patients medical use of cannabis. But they were getting a medicine that was contaminated, that had metals in it, that had herbicides and pesticides, the quality of which no one had tested or, or knew what was in it. And these are people with compromised immune systems who are vulnerable and fragile and they deserve to be protected that they deserved a regulatory regime that could make them safer when you came in in 2012 and then you know, kind of wrote the bill in Twenty 15. Hey, thanks. By the way. Thank you. This wasn't necessarily where it is now. In other words, not everybody was on board. What made you understand that this actually was a medical issue and by that I mean cannabis.

Speaker 2: Why get behind it? What was it in you or what had you seen that made you think, yes, this is something that is a solution. You know, I represent the city of Oakland among the through gates cities that I represent. Adult help, right? There won't. Yes. Alameda and San Leandro. The other two great cities in the district, but Oakland has a. has a long history of being a pioneer and a leader in cannabis. Whether it be Oaksterdam or harbor side or any of the other dispensary's or the city government approving, um, uh, you know, the, the, the use and licensing of, of dispensaries here in Oakland and the people of Oakland supporting a, a revenue source and attacks tend to come from it. You know, this has been a, a, a city that's been on the cutting edge and I represent this, this great city and a that and the, the health components that I felt as, as the assembly healthcare and health committee member and the legislator were to, of the driving forces.

Speaker 2: And you know, I had, I have had done tours of, of dispensary's. I had met a patients who talked about how cannabis was the only medicine that could ease their pain and make them feel better than they have tried so many. And that for the one thing that could make them a ease their pain and make them feel stronger and healthier for that to be illegal and not able to be used, uh, was a problem for me. And there's so much we don't know. And, and, and there continues to be and there has been major stigmas around cannabis in the we've come a long way in a short time and part of what's happening during that time is the stigma is falling away. Yeah. And I think that's important. And, and, and putting a regulatory regime helped take that stigma away when, when, when cannabis was being grown in black and gray markets, when it was done with great damage to the environment with patients getting product that was unreliable and potentially dangerous.