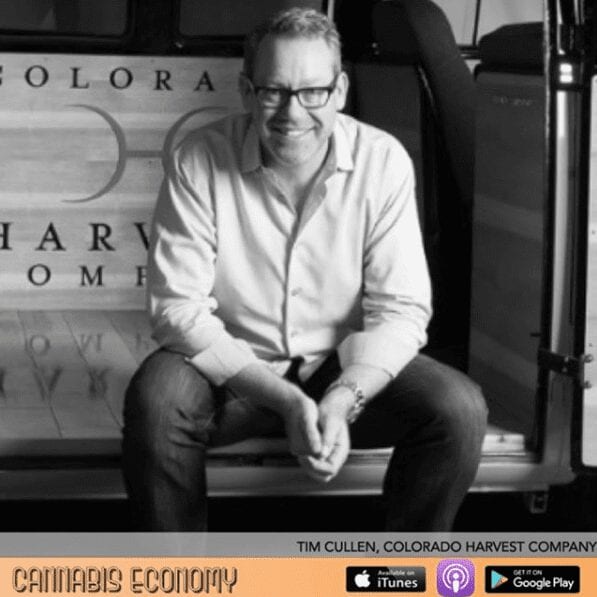 As we make our way into what will be the fourth year of adult-use cannabis in Colorado, Colorado Harvest Company CEO Tim Cullen returns to share how things have changed and how things have remained the same. For Tim, 2014 was his fourth year in operation, so while it was a transformative moment for the industry and the world, in some ways Jan. 1 was another day at the office for Tim. That said, operations were set for 2 or 3 customers at the time and 1500 people showed up. Moving into today Tim says that the water has found it’s level and the cannabis business has evened out.

Speaker 2: Tim Colon returns as we make our way into what will be the fourth year of adult use cannabis in Colorado, Colorado Harvest Company, CEO Tim Collin, returns to share how things have changed and how things have remained. The same for Tim. Twenty 14 was his fourth year in operation, so while it was a transformative moment for the industry and the world in some ways, January first was another day at the office for him that said operations were set up for a few customers at the time and 1500 people showed up. Moving into today, Tim says that the water has found its level and the cannabis business has evened out what we're going to cannabis economy. I'm your host, Seth Adler. Check us out on social, but the handle can economy. That's two ends in the word economy. Tim Colon.

Speaker 1: Oh, this one depends who's working for me, but yeah, I mean you're on the taller side, right? I am. I'm 64, right Sam, so it's gonna. Be Tough to find an employee that's going to be taller, right? You'd have to go out of your way to find them. I, I am on one edge of a bell curve. So Tim Collin, thanks for sitting down again. We got your history last time we spoke and you and I will at least I thought it was a good idea to kind of check back in and say, hey, it's a, you know, we're making our way into 2018 now and that's a different timeframe than 2014. These are different moments and I wanted to kind of hear from you, tap into your id as much as possible on the life of an operator and the mindset of an operator as we make our way into what will be the fourth year of legal adult use cannabis. Can you believe that

Speaker 4: having lived through it, I, I actually can believe that and I actually thought it was a good idea that we sit down again to go to your podcast. Thanks for chatting with you. I think you covered all sorts of relevant topics, so when you asked me to be back, it was an absolutely. Where can I meet you? So thanks for having me back.

Speaker 4: I would go as far as night and day. So, so interesting that for years have gone by since recreational sales. October third is also the eight year anniversary of Colorado Harvest Company. We just had our eight year anniversary anniversary halfway into that creational sales happened in Colorado and that was amazing. So Colorado Harvest Company was fortunate enough to have to have the first 12 licenses that the city of Denver issued for recreational sales and I'm, I would never want to not live through that again, but I'm not sure if my, my self at 45 could deal with that. Again, seth, it's almost hard to describe like you have to imagine for four years we're a medical marijuana center. We're really designed to have two and three people trickle in throughout the day. That's, that's kind of the volume and the. We had a three point of sale systems and we can handle a rush at with that and this is before 2014, before 2014 and then recreational sales hit, so January first 2014, we had 1500 people show up at 8:00 in the morning before the doors were open and we opened the doors and when there is no way, well how do we even dent align like that.