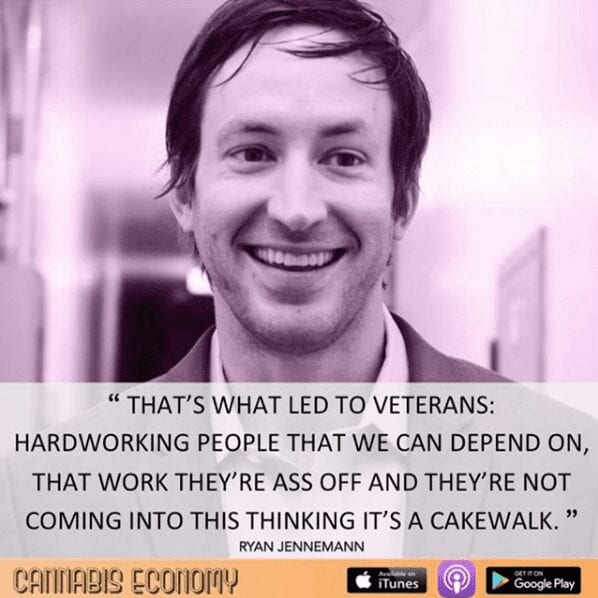 Ryan Jennemann joins us and shares his unique background with the plant from Tulsa, Oklahoma. He wanted to be called a caregiver as opposed to a criminal, so he moved to California once up and running. He noted the product that he was cultivating was making it’s way south, and so he moved to Los Angeles to ensure that in his words, he was well positioned in the biggest cannabis marketplace. Cannabis cultivation is not an easy job. You have to work hard and the industry landscape is extremely competitive. Ryan is focused on finding dependable, hardworking people, and so he’s got a military veteran internship program and a military veteran employment program. Brian’s also focused on sustainability chairs, examples of how he’s reducing his carbon footprint.

Speaker 1: Ryan Jenneman, Ryan Jenneman joins us and shares his unique background with the plant from Tulsa, Oklahoma. He wanted to be called a caregiver as opposed to a criminal, so he moved to California once up and running. He noted the product that he was cultivating was making it's way south, and so he moved to Los Angeles to ensure that in his words, he was well positioned in the biggest cannabis marketplace. Cannabis cultivation is not an easy job. You have to work hard and the industry landscape is extremely competitive. Ryan is us focused on finding dependable, hardworking people, and so he's got a military veteran internship program and a military veteran employment program. Brian's also focused on sustainability chairs, examples of how he's reducing his carbon footprint. Welcome to cannabis economy. I'm your host Seth Adler. Check us out on social with the hand mechanic economy. It's two ends of the word economy.

Speaker 1: Ryan. Gentlemen, Gentlemen, Brian, gentlemen, you got it. So many ends. So many ends. You could ask for ends. Yes sir. Oh, and every time you just. Every time you write your last name, you'll have to do this. Oh, it's a hassle. Yeah, it is. I just, yeah. A lot of times I tell people it's just Ryan j better. How do you spell? I'll be like Jj, why? It's just easier to. It's very simple. Why? What were you wearing the world? Is this from a actually on the gentleman side, uh, my, I was adopted but my family is German. My adopt my father's side. Yeah, the German, they moved over here in the 18 eighties in the German immigration and everybody was named Hyndman at the time because they didn't want to be lumped in. And I guess German immigrants in 18, eighties were like typecasted as like bad short. Any immigrant edit any time. Exactly. So, um, so for that they didn't want to be lumped

Speaker 2: in with all the cinnamon. So they made the name gentleman. So apparently you have the last name spelled the same way. I do it. You got to be somewhat related because that name has only been around for about 130 years. Scott. Interesting. All right. So let's start there. Adopted though, right? Well, I say adopted. I don't want to. My mother is my blood mother. My father, who I never met, my blood father and my father adopted me when I was a couple of years old. Oh, so that means. Come on Zach. Yeah, exactly. Yeah, exactly. We Love Dad. Is that I love. Oh yeah, exactly. He's my dad. I love him to death and my dad and I just always. But I'm weighing the bloodlines. But my dad, the reason I bring that up as my dad or the adopted father who actually wasn't my blood is the one that I feel the most close to and the family in regards to who I was thinking that I'm the most like.

Speaker 2: And my dad are adoptive father. He's the one who, he's passed away now. But um, he died in his mid forties so he died young. Uh, and, but he was a huge cannabis advocate. He and bringing up the adoptive side, I look completely different because I'm a more clean cut looking. My Dad had a huge beard and long flowing hair, you know, hippie style. And um, so, uh, my dad was huge. Cannabis, his, his father grew, my dad grew, passed onto me. So, um, so multigenerational grower. There we go. So that's, take that Emerald Triangle. Exactly. Fine. But what else about this person's philosophy? Values, mores. Why do you think you identified with him? So, uh, well my dad, uh, I'm in, him and I were really close. I mean from a young age. My Dad, he's the one, he was head of the boy scouts.

Speaker 2: He all, my dad did. Again, he was a hippie so he didn't work. He only did volunteer work who is head of the hippies, head of a boy scout or I, I mean, I'm sorry, not head of it. So heaven in the boy scouts of America for our school. He was head of the Little League, coached my baseball team, coach my football team, coach my basketball team, so he might not have worked, but he was just full time, uh, you know, working with his kids and doing volunteer. He might not have worked, but he was always working. Yeah, exactly. Um, and then on the side of that, my dad in the evening growing up, the sounds bad, but it's more we all, we lived in Oklahoma and not that we live are, we live in Tulsa, which is a large city. Sure. But at the same time there's large yards there.

Speaker 2: So we had a yard that's at least an acre. It's like one and a quarter acres. We always had a little bit of a, um, a garden in the back few hundred foot garden and mixed in that garden was always cannabis plants my entire life. So always was around growing cannabis plants at a young age. You know, my dad really pressed me. Hey Ryan, I don't want you doing any drugs at all. None of them are good, but I'm going to tell you right now, alcohol is one of the worst drugs as just happens to be socially accepted. It's accepted because it's one of the worst and that's the hardest one to get away from. And he got in. My Dad was like, what I truly, truly believe to be the worst drug is synthetic drugs. By that he was meeting pills. Um, apparently my mom, when she was in college, she had um, an issue with barbiturates.