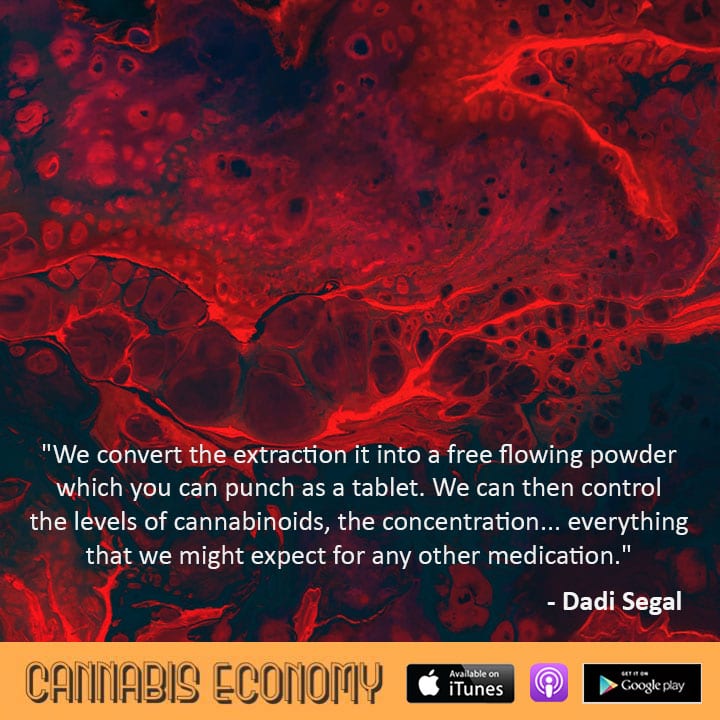 Arturo from Panaxia explains the processes and equipment that go into producing pharmaceutical cannabis: “Regular analytical systems allow you to see cannabinoids to the milligram level. This machine allows you to see to the nanogram levels, now that allows you to do two things. One of them is detect the levels of cannabinoids in the blood stream, and it’s very important for us once we go for clinical trials. For us as a pharmaceutical company, a clinical trial can never be subjective. It has to take the measurements of the cannabinoids in the blood stream, and check pharmacokinetics.”

Arturo Panaxia: We're manufacturing hundreds of different dosage forms for conventional pharmaceutical products on a regular basis. They are now manufacturing anti-lice solution, over here they are packing first aid stick. So-

Seth Adler: -With cannabis inside?

Seth Adler: So this is the bread and butter. This is what we've been doing everyday for many, many years.

Arturo Panaxia: Exactly and that's where are we coming for the cannabis business.

Seth Adler: This is what informed you in terms of the cannabis business.

Arturo Panaxia: Well, that was the basis, and still is. That's the basis, that's what makes us know how to work in the industry like a pharmaceutical company. This is one of the laboratory, you will see three of them as we proceed.

Seth Adler: Yeah and I've been in many of these in the states, and it's surprising to me how similar it looks-

Seth Adler: Well, no no, it's a cannabis company.

Seth Adler: And that's what's amazing. No because we've had, you know, in the United States we've had labs like this on site in cannabis companies and in cannabis, you know, labs specifically.

Arturo Panaxia: Okay and these are the team from Tree of Life.

Seth Adler: Cheers, there we go.

Arturo Panaxia: Another Orlandi laboratory. Over there we'll see that these are the clean rooms, I hope we can enter without.. No we can't unfortunately.

Seth Adler: But just if you go to any cannabis company in the United States, they have the coats on, they have the hair nets on, and everything. We have decided-

Arturo Panaxia: -Well I think that it's not just dressing up like a pharmaceutical-

Seth Adler: -Any place that I've been to, which it has the equipment. My point is, that we have had this reality in the United States, and we've decided to seed the control to other countries.

Arturo Panaxia: Well there's gonna be a lot of RND.

Speaker 3: In other places in the world, nobody produces according to GMP standard. Not because nobody have cannabis GMP standards, unless Israel want it. Until we have the IMC, GMP, and everybody in Israel have to work according to these standards, and then because of it we are producing here in Israel the medical grade cannabis products.

Seth Adler: There we go. So it's essentially self regulated in the United States, whereas in Israel it is not.

Arturo Panaxia: Well I would say three of four each-

Arturo Panaxia: In cannabis, each-

Arturo Panaxia: No each six months, or even sometimes each quarter.

Arturo Panaxia: We are now seeing the products, which we have started working on probably two years ago or one and something. Eighteen months. Some of the machines you can see here, that's a MSMS machine.

Seth Adler: What does it do?

Arturo Panaxia: Regular, and you will see a bunch of them in the next room. Regular analytical systems allow you to see cannabinoids to the milligram level. This machine allows you to see to the nanogram levels, now that allows you to do two things. One of them is detect the levels of cannabinoids in the blood stream, and it's very important for us once we go for clinical trials. For us as a pharmaceutical company, a clinical trial can never be subjective. It has to take the measurements of the cannabinoids in the blood stream, and check pharmacokinetics. So, that is one thing that is important.
The second thing is to go, not for the most common twelve cannabinoids that we are seeing and that we are testing on a regular basis, but to delve sometimes a little bit deeper into the more rare cannabinoids.