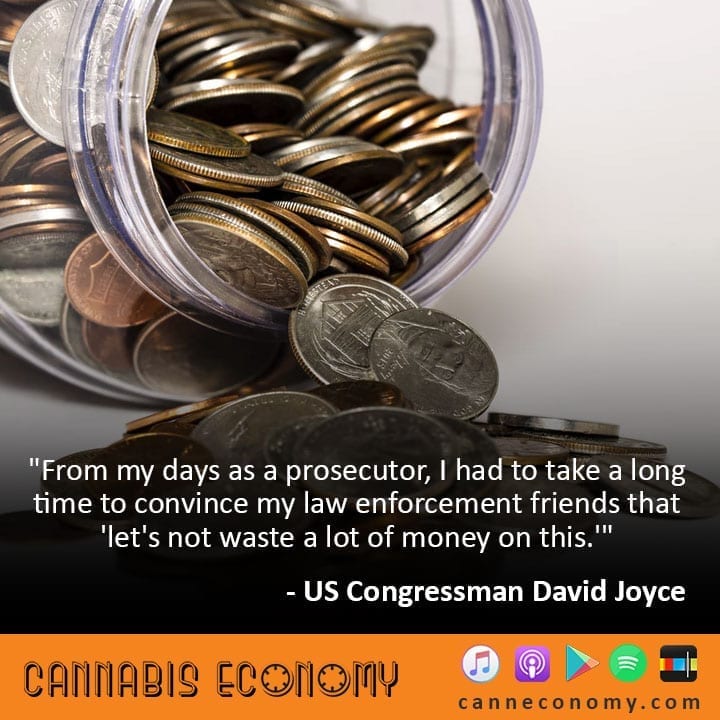 Congressman David Joyce talks about the various pieces of new legislation that have been slowly but surely advancing cannabis. However, there is still much to be done, especially in educating the opposition about the benefits of cannabis for states rights, businesses, and even drug abuse in order to form a bi-partisan coalition. A common comparison of cannabis to harder drugs should be dispelled through showing how it does not hold the same risks, and legalization can even help alleviate the risks of harder drugs regarding crime and substance abuse.

Seth Adler: Congressman David Joyce, thanks so much for giving us some time. Your name in this field has risen like a rocket ship, sir. Some of that is because your name is emblazoned across the STATES act. Let's begin there, shall we?

David Joyce: Sure. The STATES Act will hopefully bring those states that have found it fitting to either have full legal or at least medicinal or some form of cannabis activity sanctioned by the legislature or the vote of the people. My position is that if the states are willing to do that, then the federal government should get out their way and not interfere with the enterprises there because the businesses are all legitimate going concerns that are ratified by the states, the corporations existing under state law, the activity in which they're engaged is all dictated by state law. Then the federal government is best to leave them alone and let them do what they do best.

Seth Adler: Perfect. All right. We love it. Podcast line knows no time, but you guys voted for the what I call the hemp bill.

Seth Adler: Other people call it the farm bill yesterday. Some of what's in the STATES Act already accomplished happen no longer on the Controlled Substances Act.

David Joyce: Correct. The beauty of it is that solely but surely we're making this progress here and STATES Act was one. It's not exactly what we need. I mean it's not all the legislations that's necessary to get cannabis to where it needs to go, but it was certainly a step in the right direction. A matter of fact, I've been chatting with Senator Gardner this afternoon about how we're going to develop ... If we can get it done this year, that'll be one thing. I don't see it happening though, but at least having the same bicameral/bipartisan approach to getting this all resolved in the next congress.

Seth Adler: Yeah. Getting this all resolved in the next congress. I read through the STATES Act. I think that there might be ... I would love some clarity here-

Seth Adler: ... as far as banking and 280E reform. Is that in the STATES Act? Not necessary.

David Joyce: No. I followed up first last year in the Criminal Justice Services, CJUS Bill and put in an amendment that said the federal government, the Justice Department, should not spend any money to chase any of these cannabis activities in states in which it's found to be legal or ratified, authorized, however you want to approach it. The problem is that when we try to do it on the finance end, I end up getting in ... It was a long debate.

David Joyce: Unfortunately, people who told me they were with me left me as we were in the room during the debate, but you have some of the older members who then immediately conflate that cannabis will ... "I know somebody who's got addicted and died from a heroin overdose or an opioid overdose." I'm like, "Wow. Wow. Wow. Wow. Wow. Listen."

David Joyce: Correct. You have to have a special license to operate a truck.