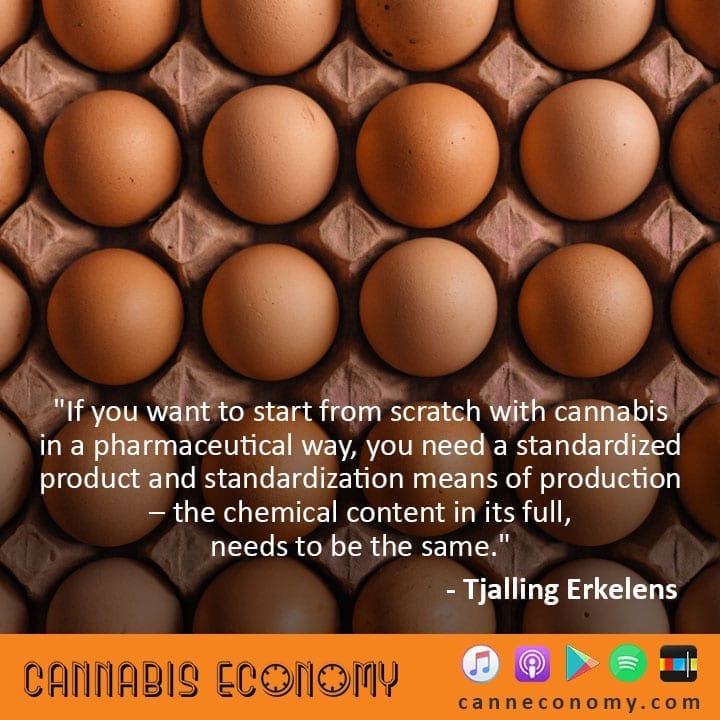 Tjalling Erkelens, based in the Netherlands with one of the oldest semi-recreational cannabis programs in the world, compares the global development of cannabis. Change and progress towards legalization, particularly for medicinal marijuana, are happening on all continents across the globe. But each country seems to be taking a different approach, whereas we should be aiming for alignment and harmonization to give patients consistency when travelling.

Nancy Thomas: I think the gummies are going to continue to dominate as the industries number one edible. And people have asked me why that is and I think there's a number of reasons but one of them is that we've all really gotten used to taking medicine in gummy form. Some very large percentage of vitamins is now taken and ingested in gummy form. So I think it's a natural, plus people love gummies. They're delicious.

Seth Adler: They are delicious. I just had some.
Tjalling Erkelens, welcome back to Cannabis Economy. Thank you so much for giving us a few minutes. I know that you're in the Netherlands because I've seen that map behind you in person.

Tjalling E.: Yeah. Yeah. I am back in my office in the Netherlands. I was out for a couple of weeks doing some conferences in places like Aruba, and I was in Boston last week. So things are happening. Yup.

Seth Adler: Yeah. We had the opportunity to have some breakfast. So very much appreciated that, and that was in between Aruba and Boston.

Seth Adler: This is your life, right? You go to Aruba and it's actually for business.

Tjalling E.: Yeah. And you even take a dive and then you lose your phone. That's basically what happened.

Seth Adler: Yeah. You're serious. That's not just happenstance. You actually did lose your phone, but you've got it back now. And, again, the entire world is behind you or should we say in front of you. And let's go ahead and take the opportunity to as we move into 2019 get that global update from you. You are in the Netherlands.

Tjalling E.: We are based in the Netherlands.

Seth Adler: Yeah. Let's just start there as far as what is the latest?

Tjalling E.: The latest in the Netherlands is that we are starting to see a shift. The Netherlands actually has one of the oldest medicinal cannabis programs. Actually has one of the oldest let's say semi-legal recreational programs running for more than 40 years now, the so-called coffee shop system, which is totally separated. So it is the aim of the Dutch government to keep those things fully separated as well. That is kind of different as towards what is happening in other countries. So in the Netherlands, we also have seen a shift with a regard to medicinal cannabis. Last year where the insurance companies based upon an advice from an organization called The Dutch Healthcare Institute, they said they're still lacking evidence, duh, duh, duh, and you should not reimburse. And that's actually where all the insurance companies said, "Okay. Then we'll quit."
The other thing is that we have our first clinic results coming up right now on evaporated flower. Those results will be published this week. Although that is what all my colleagues are telling me around me. It will be out this week. So it's pretty exciting now.

Seth Adler: And this is kind of related to last thing. We need research. Okay, fine. Here's some research. I went ahead and I did it, right?

Tjalling E.: Yes. It's exactly where we are. So where we bring our fully stigmatized flower, which is always the same as it should be, we were able to get into those clinic trials because the product is always there. It's one of the prerequisites for bringing a product to market. You must be able to provide it always. The product you have in trial, that product should be on the market. So that's what we actually do. That trial was a fibromyalgia trial on pain. I'm still not allowed to speak ahead of the publication, but it's worthwhile reading the outcome. And I can tell, it's really worthwhile reading the outcome. It is a positive outcome I can tell. They have been using, they have been trialing different varieties. Actually three of our varieties have been trialed, and it's compared to placebo. It's very interesting to see those results. They will be published in a magazine called Pain, and that's where we go.