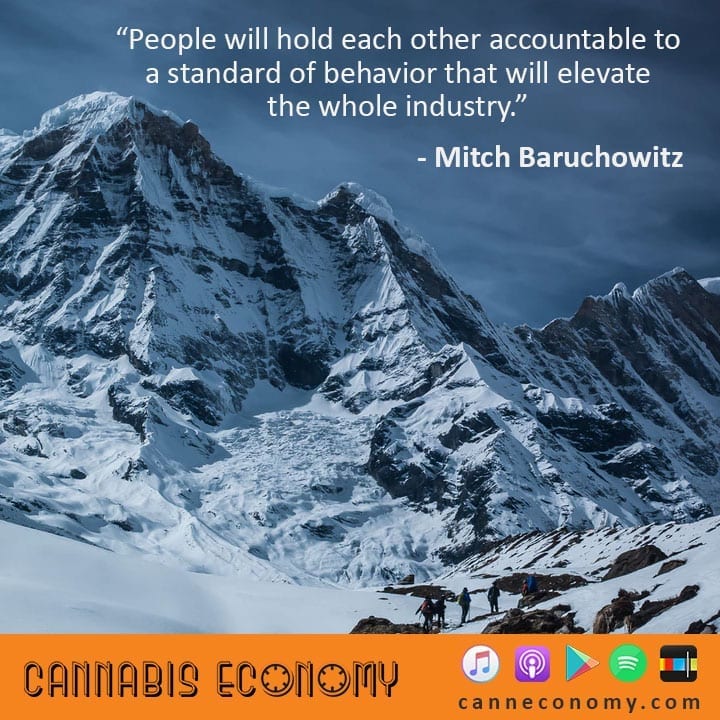 Mitch Baruchowitz joins us with a brisk-paced narrative of his foray into the world of cannabis, with the same velocity and passion he has found in the innovations of the industry. He touches on a range of topics including investment strategies, tragic events with unexpected influence, misconceptions about legality and regulation of cannabis, organizational differences between states, and the future of the business as he sees it.

Seth Adler: Mitch Baruchowitz joins us. Welcome to Cannabis Economy. I'm your host, Seth Adler. Download episodes on canneconomy.com or wherever you currently get your podcasts. First, a word from Nicole Smith and Evolab, and then Mitch Baruchowitz.

Nicole Smith: Licensing is just problematic. Generally, you're sharing your IP in a variety of different locations and trying to replicate manufacturing across multiple states, and it's just intensely problematic, not only for the company that's trying to license, but also for the licensee. It just really became difficult to figure out the right way to do that, protect intellectual property and all of those sorts of challenges that come along with it. What we decided was easier was to develop an infrastructure where we can produce our formulations without THC and make them available to everyone.

Mitch B.: But cannabis.

Seth Adler: How do you pronounce the last name?

Mitch B.: Yeah. Well, between that and Merida, people pronounce ... Oh, people see me coming a mile away. People start speaking Hebrew to me, usually.

Seth Adler: Right, and then they don't understand that because you're speaking German. No, that's Spanish.

Seth Adler: Yeah, that's the other thing is you apologized to me earlier for speaking so quickly. We had a phone call even, and you're like, "I speak so fast, I won't ..." For me, my ears, this sounds correct.

Mitch B.: Here's why that's going to be funny. My brother is a Brooklynite, and he calls something, I had never heard of it until like two weeks ago, called the humble brag, which is this fake humility that people have while they're bragging. As a brother, he could say that to me knowing that he's my older brother. My mom got remarried when I was very young, and because of that, maybe, my stepfather's a wonderful ... They've been married for 35 years or more.

Mitch B.: Yeah. Yeah, well, when I was really young. My biological father kind of disappeared, and so my brother was a key element of shaping my childhood, so I listen to him in all things.

Seth Adler: Got is. He's almost fatherly, is what-

Mitch B.: Even though he's only two years older.

Seth Adler: Got it, yeah.

Mitch B.: He tolerated, in the driveway basketball games, that when it was game point that I would foul him til I almost won, you know?

Mitch B.: He could never get a shot off because I was just fouling like crazy, so just an amazing older brother. He's like, "You know, Mitch, you've mastered the humble brag," which I had never heard of but I got a big kick out of. It's the way to be humble while bragging. I think, over time, I've developed because, in this space, we talk to a lot of people.

Seth Adler: This capital space or this cannabis?

Mitch B.: Cannabis and capital combined. You talk to people who may not have the background in finance or the background in structure, and so it's a speed and also content, and both combined probably make it very difficult to get their head around. If you're explaining a capital structure for something, and they have no idea what you're talking about, and you're doing it very fast, and they're from Missouri, they're going to look at you, and they're going to go back and say, "I need the replay."