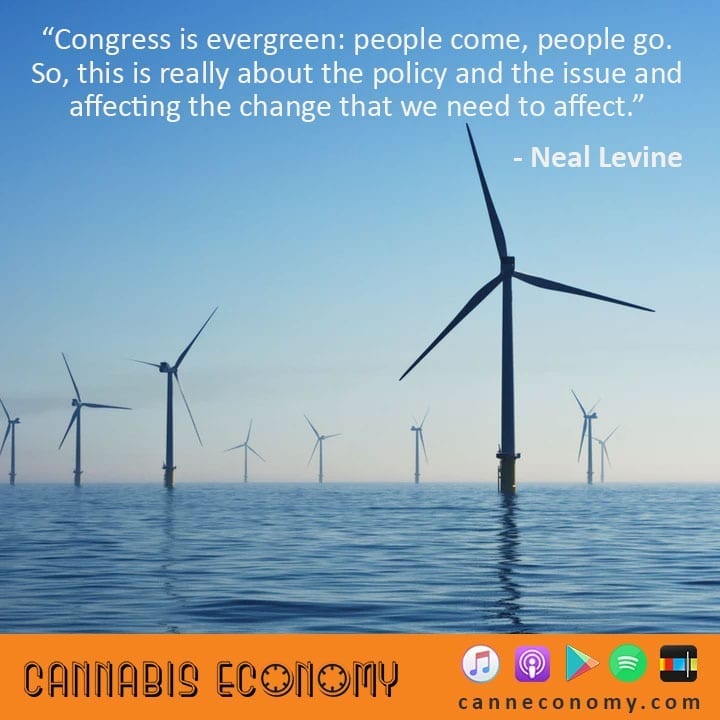 Neal Levine joins us for the first time with a microphone, featuring a guest appearance by Andy Williams. Levine talks about the various legislative actions happening at the moment, including a primary focus on the STATES Act. As Canada fully legalizes and Mexico plans to follow suit, these legislative actions are the key to preventing the US from getting left behind in the industry. But the STATES Act is just incremental, and needs to be followed up by other actions in areas such as tax policy.

Speaker 1: Neil Levine joins us. Welcome to Cannabis Economy. I'm your host, Seth Adler. Download episodes on canneconomy.com: That's two N's in the word economy. First a word from MedMen, and then Neil Levine featuring a guest appearance by none other than Andy Williams. MedMen continues to expand its footprint on the cannabis landscape, opening new stores in Los Angeles, Las Vegas in the iconic Fifth Avenue in Manhattan. They've also opened a 45,000 foot high tech cannabis cultivation and manufacturing facility in Nevada. The company has reached a $1 billion valuation, making it the country's first cannabis unicorn and it's just the beginning. Learn how MedMen is building the future of cannabis today at MedMen.com. Myriad conversations with Neil Levine, never with microphones before.

Speaker 1: Welcome for the first time.

Neil Levine: You finally got me.

Speaker 1: So, this guy Chuck Smith, you know him?

Speaker 1: I mean, for real though. That's like a real person who does good business. And he's actually interested in changing the world at least from, you know, one perspective.

Neil Levine: And one of our directors.

Speaker 1: What are we doing?

Neil Levine: What we're doing is, well, it's a couple of things, but the main thing is that we are building a real national federation association to represent the industry and our primary focus is passing the States Act into law. CTF has evolved out of the new Federalism Fund, which was a bunch of larger players in the space that came together to try and get a [2ADE 00:01:37] fix and some other stuff in federal legislation. Obviously, we didn't get that done. But when you read the States Act, it's essentially NFF's talking points in legislative form. And so, when we've got a bipartisan piece of legislation that the President said he will sign into law, it fixes banking 2ADE and the threat of civil asset forfeiture and having DOJ come and kick in our doors, we are putting the resources together to get that done or die trying. Our goal is to pass the States Act in the next Congress. And while we do that, we are setting up a real national association to represent our industry's interests.

Neil Levine: From business by the way.

Speaker 1: Understood. Sometime along the way between 2019 and 2020, the goal is to pass States Act.

Neil Levine: The goal is to pass the States Act into law in the next Congress, yes.

Speaker 1: Yeah. So, I just spoke to Chris [Crane 00:02:28], and he says to me, "Think about it from our current president's perspective. Who wants the win? No matter what the win is, he wants to win." And so, if democrats are going to run on cannabis in 2020, well we got to have that win. And so, that Act passing whereas I thought, well, we didn't do anything in the Senate, and Mitch [McConnell 00:02:58] doesn't care, he cares about him, but he care about cannabis. Chuck Grassley still there, and what are we going to do? Well, we got to have a win.

Neil Levine: The President has said that he would sign States Act into law. Our lead Republican in the Senate is Corey Gardner who's just a head of the NRC, and lead the charge to hold the senate for the Republican Party. We have a very broad based lobbying team that covers both houses, both sides of the aisle on both houses, and reach into the administration, and we're going for it. Look when you have Canada up and going and roaring, Mexico's moving to create a legal market, we are about to cede an American industry for no other reason outside of outdated policy.

Speaker 1: You don't think that we already have ceded it?

Speaker 1: Wonderful, fantastic. So, yes, G7 nation, and thanks for legalizing, but we haven't ceded anything yet?

Speaker 1: You ain't seen nothing yet?

Neil Levine: Now, the US is going to win this race, but not if Congress doesn't act within the next couple years. Then we're in trouble. Yeah.

Speaker 1: What are your thoughts on doing it [inaudible 00:04:01], if we don't immediately get uptake on the States Act, you know, going ahead and doing something with 2ADE, maybe having Steve Mnuchin-

Speaker 1: It does everything that you need it to do.

Neil Levine: In a short term for sure.

Speaker 1: Absolutely. So, 2ADE, I have this new idea that Mnuchin, reauthorizes FinCEN guidance from February 14 2014-

Neil Levine: He needs Congress to act because the FinCEN guidance is tied to-

Speaker 1: No. Cole Memo was rescinded, but FinCEN guidance was not.

Speaker 1: No, of course, not. But rollback Blumenauer is the most important thing that there is [inaudible 00:04:53] loses but since we have a democratic congress that's okay, right? We just have to attach who? David Joyce probably you might know something about him.

Neil Levine: David Joyce is the lead sponsor of the States Act and we'll be on stage together tomorrow at three o'clock.

Speaker 1: So, podcast land knows no time, this does not go out live, but we are at MJBizCon, and if you were there you, you remember it, and if you don't, you know, you-

Speaker 1: So, David Joyce a lead republican why wouldn't you say Matt Gaetz is, right? He's doing all right for us.

Neil Levine: We love Matt Gaetz. Matt Gaetz is on the States Act. It's not a competition, David Joyce is the lead.

Speaker 1: I gotcha, I gotcha.

Speaker 1: As we're in this conversation Carlos Curbelo losing, you know, that was a proponent for the industry. What does that make you think when someone like Carlos Curbelo loses? We lose a guy from that side we could use.

Neil Levine: The election went very well for us overall. We did lose a champion in Carlos and that was personally and professionally a little painful, but that's what happens in Congress, right? Congress is evergreen: people come, people go. So, this is really about the policy and the issue and effecting the change that we need to effect.