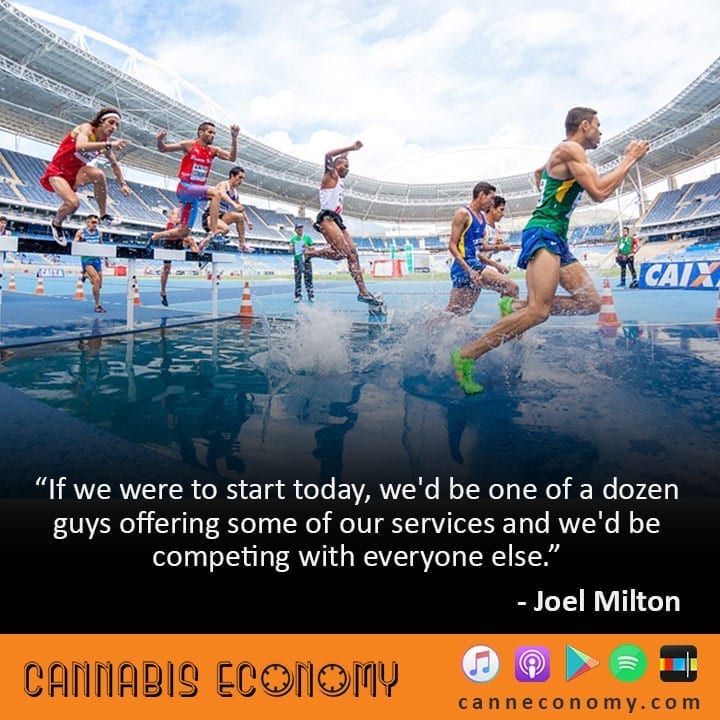 Joel Milton talks about his journey leading one of the first cannabis tech companies through a selective startup accelerator and into the market in 2014. At the time, cannabis still held a lot of stigma for professionals, and his company was alone in the group of startups. Investors were hard to find, so the company met its fair share of struggles and hardships. But some early pioneers in the space gave both funds and advice, helping it find early success.

Seth Adler: Joel Milton joins us. Welcome to Cannabis Economy. I'm your host Seth Adler. Download episodes on canneconomy.com. That's two Ns in the word Economy, or wherever you currently get your podcasts. First a word from Med Men and then Joel Milton.

Speaker 2: Med Men continues to expand its footprint on the cannabis landscape opening new stores in Los Angeles, Las Vegas and the iconic 5th Avenue in Manhattan. They've also opened a 45,000 foot high-tech cannabis cultivation and manufacturing facility in Nevada. The company has reached a $1 Billion dollar valuation, making it the country's first cannabis unicorn and it's just the beginning. Learn how Med Men is building the future of cannabis today, at Medmen.com.

Joel Milton: Here we are.

Seth Adler: I mean, you and I are live. Podcast land knows no time.

Seth Adler: So who knows when this goes up.

Joel Milton: Huh, do you have a guess?

Joel Milton: Can I say hello to my future self?

Seth Adler: Sure, yes you should.

Seth Adler: So this is our little friend.

Seth Adler: Who's got to be less than two. There are, we're at the MJ Biz Con. Lot's of people here. Also there's a diving show.

Seth Adler: Yeah. So free diving, which it's all about equalization on the way down and CO2 on the way up and that's how the two industries are related.

Joel Milton: The CO2 side.

Joel Milton: I got it.

Joel Milton: I see what you did there.

Seth Adler: But you don't get in to that with the baker.

Joel Milton: Not with baker, no.

Seth Adler: Why is speaking to me on a microphone on a cannabis podcast like a wedding speech, I wonder?

Joel Milton: It's an interesting audience and you guys stay on your toes.

Seth Adler: He's interested in talking to us. What's this?

Joel Milton: He does not take no for an answer.

Seth Adler: No he does not 'cause he handed us a pamphlets and you don't get a chance to say pamphlets too often, but he absolutely handed me a pamphlet.

Joel Milton: He did.

Seth Adler: You said, no thank you. He was not interested in your no thanks.

Joel Milton: He did not take no for an answer.

Seth Adler: You were taking a pamphlet.

Joel Milton: Hire him for a sales person.

Seth Adler: Well, a wedding speech. How's that like this?

Joel Milton: Well like I said you got all sorts of people around. Some are paying attention to you, some aren't. Head on a swivel and you just gotta keep calm and just tell the story.

Seth Adler: When did you start Baker? 'Cause it was a while a go now.

Joel Milton: It was a very long time ago. It was in...

Seth Adler: 'Cause it feels like it was, you're new to me, but that's not true.

Joel Milton: No, I looked in my e-mail and we connected like three years ago.

Joel Milton: Yeah. We started Baker in 2014. In the summer-ish, although it's a blur in those early days.

Seth Adler: Right and there's always been the Colorado and California thing, right?

Joel Milton: Yeah, so when we started Baker, we were actually all living in New York at the time. David and I had, would have been working together for a number of years and we got introduced to the cannabis space.

Joel Milton: Someone told us about it. Dave and I had an agency where we were building apps and websites and doing consultancy, and design and development for people.

Joel Milton: Yeah, It was. We were in between projects.

Seth Adler: Got it.

Joel Milton: For all of you out there, it is okay to not succeed at your first project. I call them projects. It's a company once you have real revenues and people, but early on they're projects.

Joel Milton: Yep. So we were in between projects working on an agency to keep the lights on 'cause yeah, you need to pay for things in New York City.

Seth Adler: And you have to pay a lot, usually. No matter what it is.

Joel Milton: Yeah. Yeah, uh-huh. Yes. Someone was like, "you should build an app for cannabis" and I was like, "cannabis?" In 2014 it was not in the news every day.

Seth Adler: Definitely not on the east coast, so this is where...

Joel Milton: Definitely not on the east coast.

Joel Milton: Not at all. Not even close to on our radar.

Seth Adler: There we go. So someone actually had to introduce the cannabis industry to you and you said?

Joel Milton: Well, they had to introduce the legal cannabis industry, to me.

Seth Adler: Certainly, that's what we mean by cannabis industry, but go on.

Joel Milton: Yes, indeed, yeah and in New York it was just that. I guess the point of that is that it was sort of like a stigma and even amongst young professionals who were interested in this space. It still wasn't something you really spoke about in public.

Seth Adler: So he's just guy from co-working space at the time?

Joel Milton: Just guy from co-working space. Ease dropping at the time and he's like, "what are you guys thinking?" and we started talking and he's like, "well, I'm an engineer, I can build it." Dave was like, "Yeah, I'm a product guy. I'll design it." I'm like, "I'm a sales guy. I'll sell it."