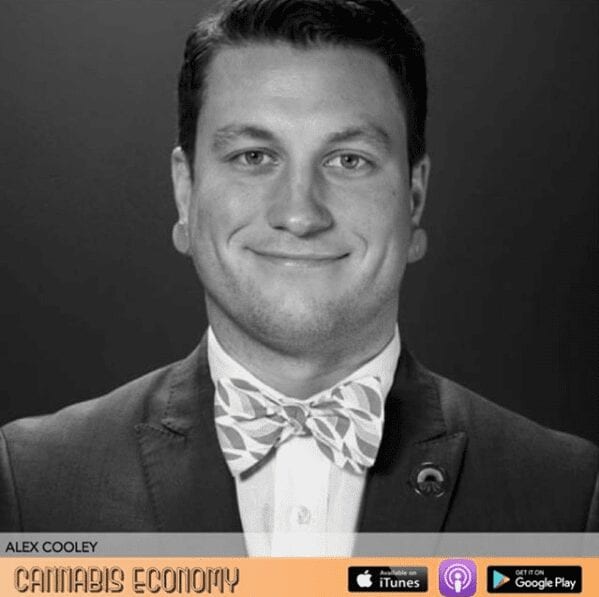 January 5, 2017
Alex Cooley of Solstice returns to give us not only an update but a history of legislation and regulation around legal cannabis in Washington. We initially go back to Alex’ first visit in episode 56 to give you a sense of who he is- and then come back and dive into how we have what we have in Washington State. Alex goes back to the pre-2012 vote and explains what it was like on the ground providing medicine to patients. He then covers  i502 and the inherent differences between that initiative and amendment 64 in CO. The conversation turns to 5052 and finally what it’s like post July 1st 2016.

Speaker 1: Alex Cooley returns. Alex Cooley, solstice returns to give us not only an update for the history of legislation and regulation around legal cannabis in Washington. We initially go back to Alex's first visited in episode 56 to give you a sense of who he is and then come back and dive into how we have what we have in Washington state. Alex goes back to the pre 2012 vote and it explains what it was like on the ground providing medicine to patients. He then covers [inaudible] and the inherent differences between that initiative and amendment 64 in Colorado, the conversation turns to 50 slash 52. And finally what it's like post July first 2016. Welcome to cannabis economy. I'm your host Seth Adler. Check us out on social with the handle can economy. That's two ends. And the word economy, the triumphant return of Alex Cooley. How much of a Georgia do you remember?

Speaker 3: Oh, great amount. Yeah, no, absolutely. Um, I have been back multiple times. I mean, I'd loved it. And lived in Savannah, Georgia the majority of the time. Then a Hilton head island, South Carolina, which both are very, very, very beautiful place. These are just beautiful, pristine. Justin wrote trees, Spanish Moss, intercoastal waterway. No, it was beautiful. No, I, I think I'm, I'm very fortunate. I look at it as a, uh, my um, my roots in the south, but my head's in the northwest so I have the principles of a politeness and, and good posturing. But then I also have a very progressive agenda. And what, what age were you specifically when you moved? 12. Twelve years old. So you absolutely remember it and it certainly wasn't your decision. It doesn't sound like at 12 I was not making the decisions in the family know what, uh, how did the family structure work?

Speaker 3: Uh, so my father, uh, worked for himself. He was in a independent financing and investment banking. And so, uh, he actually wanted to live closer to his family and uh, you got a good amount of family up here or there in the northwest. And so, um, since he was able to, you know, you could work from anywhere and it made it a good fit for my mom at the time. So we just said, okay, it's time to go to Seattle. So his family's from Washington. Is he from washing? No, I actually, I definitely have an odd circumstance where family locates and not actually being from there. Um, so he's actually from Louisiana. I'm from Baton Rouge, but none of his family was really left there. They had all kind of gone their directions and the majority of it ended up in the northwest and my mother from Rochester, New York.

Speaker 3: And so, uh, most of her family was on the east coast and so we, you know, first half of my life was with my mother's family. And then the second half of my life with my father's family. This, uh, your family's literally from all over the United States and now everyone lives in Columbus, Ohio. Somehow with the exception of you a yes. And that will never happen. Alright. Okay. So call Ohio's out of the question that came with residents. Yeah. All visited now. And again, I'm kind of forced to, uh, with a nephew and my entire family there, but yeah, no, unless I get one of those five girl licenses that they're trying to talk to them, then, you know, then there's a monopoly like that 20 percent of the market. And if I'm lucky I could actually be better and take up to 40 percent sure it works properly I think or whatever, you know, whatever it is.

Speaker 3: How old's your nephew? He's three. So I have a four and a half year old niece and a two year old nephew. Okay. And so, uh, I understand the uh, well, I mean we've got the best job in the world, uncle. Yeah, exactly. There's nothing better operation. Cool uncle. Exactly. But on that for a little while. Absolutely. Do you have nicknames for, uh, for your nephew of jewels and what's his Julian? Oh, I feel like you've got to do better. I know, I agree. I have to go to Ohio to do better to get it. Don't go to Ohio that much. Well, what did he refer to himself by name when he was two? Yeah. What did he, what did he use? Julia. Oh, so he said to him. So for my niece it's Yay. Or who? For Les L. Alright. And a shamrock for a Samuel.