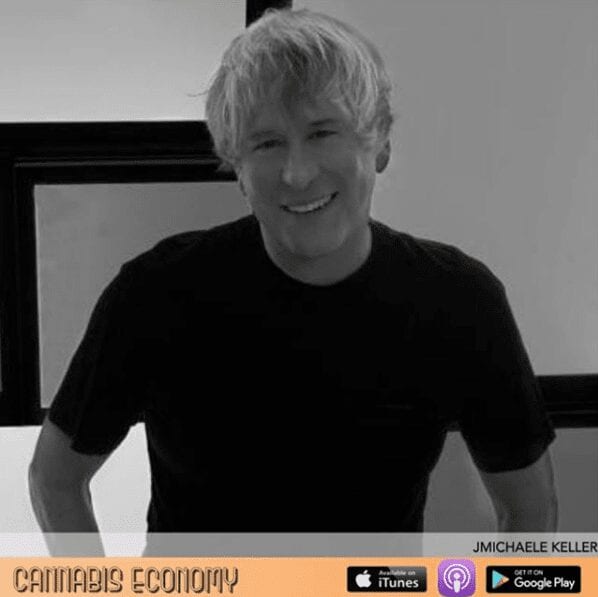 Jmichaele Keller joins us and shares that he considered himself a global citizen upon his first trip out of the states when he was a kid. He appreciated architecture, went to Rome and as far as Asia to investigate. He found a calling though in computers- in which he started before there were Windows. He got a job as a room service waiter and fell in love with hospitality. He got one of the first IBM PCs that Marriott had- which had 64K of RAM and a 10 Megabyte hard drive. He made his way into finance and wowed executives by budgeting and forecasting using that now archaic machine. From there he went on to software and on to real estate. Jmichaele ultimately found his way into the cannabis industry through the very important work of lab testing.

Speaker 1: JMichaele Keller, JMichaele Keller joins us and shares that he considered himself a global citizen upon his first trip out of the states when he was a kid, he appreciated architecture, went to Roman as far as Asia to investigate it. Came back to the states and got an early job as a room service waiter and fell in love with hospitality. He found a calling though in computers when he got one of the first ibm pcs that Marriott had. He made his way into finance and wowed executives by budgeting and forecasting using that now archaic machine. From there, he went onto software and onto real estate, and Jamie shall ultimately found his way into the cannabis industry through the very important work of lab testing and on the side, he now works on consciousness. Welcome to cannabis economy. On your host Seth Adler, check us out on social with the American economy. That's two ends in the word economy from steep hill labs jam, Michelle Keller. Excellent. Perfect. Perfect.

Speaker 2: I have to admit to you that every time we've now seen each other many, many times all over the world. Yeah. And every time I faked my way into, you know, being able to pronounce your name, I have. Just tell me, think French. Okay. That's the key. Jay. Michelle [inaudible]. Michelle, doesn't that sound so exotic? Does, and this is not what I thought it was to begin with. And by the way, there are many people in the industry who have no idea that that's how to pronounce it. You realize that, right? So Jamie Shall Keller, which is easier. Yeah. Uh, yeah, that's the German side of me. But you, I know that you're based in Amsterdam and you just don't sound Dutch. I was born in Ohio. [inaudible]. So let's just start there. Okay. We'll get to steep hill, right? Because that's why you're here. Let's be honest. But, uh, why are, and there Sara Bader be look at that.

Speaker 2: Um, why? Uh, Ohio to Amsterdam in cannabis. You know, what was it like growing up in Ohio? Where in Ohio? Sandusky. Okay. So like literally like the Midwest and Midwest, obviously someplace that I would not be comfortable in. And did you know that how, how immediately in your life did you know that? As soon as I went to college, I'm like, all right, I'm never going back. Okay, I'm going to go back because my family's there, but I could never live there. So you didn't know that you weren't really pleased with the place until you had seen something else. Is that fair? I went, I spent my junior year in Rome to school and that pretty much shifted my view point to like, all right, I was accidentally born in the u. s got it. That's my viewpoint. And so, uh, what's university were you at to Notre Dame?

Speaker 2: Notre Dame. Other midwestern Catholic. Exactly. Catholic boy. Sixteen years of Catholic education. And you're a big fan of Newt rockne and absolutely live and die. It was a sports guy, so I know who knew him. But you do know, you have to know because it's a, it's a, it's a religion actually their football. That's why they have the gold dome. When you had touched on Jesus, you know about that too, right? Of course. These things actually there are tests. Well, are you a religious person because you went to Rome? My religion and architecture. Okay. Aha. Aha. So you have old stuff. Have old style. Old African would say that. So you get to Rome and then just as you do your, does your mind's eye opened up completely and. Totally. Oh my God. Um, well it probably opened a little bit earlier than that because I traveled a lot as a kid with my parents and it probably happened when I was twelfth.

Speaker 2: Okay. Um, we spent three months in the Orient and I was fundamentally changed already then. So I don't really, I've kind of been a world citizen since I was twice as long as I can remember. So what, what did you see and feel in these other places? You know, what, what was it that, that kind of Roman, the Asia, this was not similar, but no, they are similar in that they are not America. Definitely not American. It's like when I can give you the example of why I chose to move to Holland. Okay. So I mean it was for a business reason. I'm like, we needed an office in, in the EU somewhere. Um, and at the time I was living in a motor coach. Okay. I'm with my girlfriend. I'm drifting around the United States where we felt like dean because I was running a software company and all I need is an internet connection.