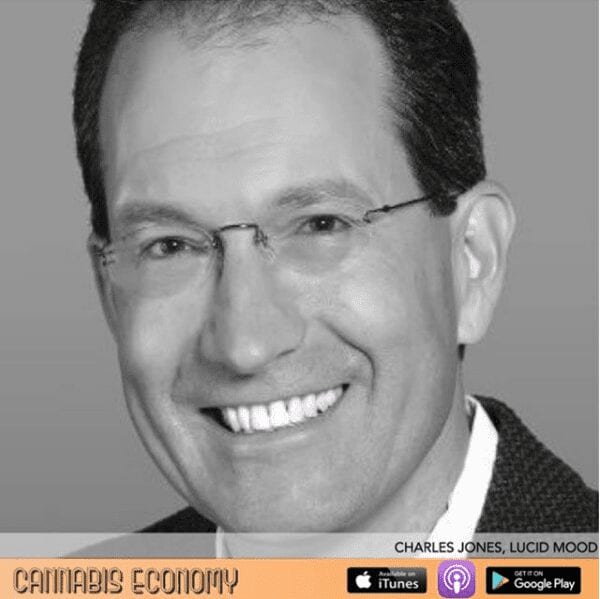 Charles Jones joins us and shares that a fellow parent had called him concerned that her son was using marijuana and asked him if it was safe. He did some research and found how many cannabinoids there were, how they interacted with one another and emerged from his research with an understanding that by combining cannabinoids and terpenes in the right ratios, could create a broad range of psychoactive substances which could treat everything from insomnia to pain to improving creativity. He realized that an extremely wide range of effects could be found in this one plant. Which led him to the conclusion that cannabis isn’t a drug so much as a drug development platform which much safer than opioid alternatives.

Speaker 2: Charles Jones, Charles Jones joins us and shares that a fellow parent had called him, concerned that her son was using marijuana and asked him if he was safe. He did some research and found out how many cannabinoids are work, how they interacted with one another, and emerge from his research with an understanding that by combining cannabinoids and terpenes in the right ratios, he could create a broad range of psychoactive substances which could treat everything from insomnia due to pain to improve and creativity. You realized that an extremely wide range of effects could be found in this one plant which led him to the conclusion that cannabis isn't a drug so much drug development platform, which is much safer than opioid alternatives. Welcome to cannabis economy. I'm your host Seth Adler. Check us out on social with the hand mechanic economy. That's two words on the word economy. Charles Jones, Charles Jones. Oh,

Speaker 1: you look like this reputable person that could run any business and you're running a cannabis business. Why do we have the pleasure of this? You know, adult looking person who seems completely reasonable in our fine industry. Another parent called me concerned about the fact that her teenage son was using marijuana, wanted to know whether I thought it was safe. She knew I had a science background. She knew I used cannabis. Okay. I said, let me get back to you on that. And I dug into the peer reviewed research on Google scholar and emerged more or less from kind of being just swept away and fascination by how many cannabinoids there were, how they interacted with one another, turpines the entourage effect, and emerged from this with, uh, an understanding that by combining cannabinoids and terpenes in the right ratios, you could create a broad range of psychoactive substances that could treat everything from insomnia, pain to improving creativity and listening people out extremely wide range of effects could be found in this one plant that marijuana wasn't a drug so much as a drug development platform and cannabinoids and terpenes.

Speaker 1: Pretty much. There's no ld, 50. There are much safer than the alternatives be the opiates or a Ssri or, um, benzos. So I wa, I never got an answer to her question. Got It. Than to say wide recommend your, you know, you tell your son to wait until they're in adults before they put thc into their brain. Sure. But along the way I saw this vision for what we could do with cannabis. I didn't see anyone else doing it and I decided to leave corporate America and pursue the idea. When was this? April of 2015. Okay. So, uh, in cannabis years, you know, cannabis. Here's your dog years cheer. About 15 years in now. Exactly. Yeah, exactly. So, science background, what does that mean? Right? Science mindset up. My father was a chemist and a chemical engineer and I did very well in science and math emerge from college with degrees in math, computer science.

Speaker 1: And uh, where'd you go? Sufi University of Michigan. Ann Arbor. Okay. And where are you from? West Virginia. Okay. The Blue Ridge mountains, I believe they're technically in Virginia. I see. Certainly will seem. John Denver's a. that's what I was doing in my own show. Exactly. Fair enough. Okay. So West Virginia, what was that like growing up as a kid? Right. Kid, teenager. What was, uh, what was it like on the, on the streets of a town in West Virginia while I was in the click of kids at the intersection of merit scholars and marijuana users. I also was in that, uh, largely all of us were determined to get out. Right, okay. Fair enough. And Arbor Michigan. And why did you pick that institution? Um, didn't quite knew what I wanted to do. It's a big school, a lot of different. Um, and I loved the culture. And you never liked the Ohio state, so it felt like a fit I would imagine.

Speaker 1: Well, when Ohio state would come to play at Michigan, I would take the tickets I got as a student, scalp them. Yes. And then go on tour with the grateful dead. There were so not only a businessman, also a person with good taste in music. And also, uh, this cannabis enthusiasm. It seems like it went as far back as, as West Virginia, is that fair? Yes. Okay. But you don't, you don't have the dreadlocks. You're not wearing this tie dye shirt. Right. And I'm sure that this kind of comes back to the, some of the principles of your organization. Um, when was it obvious to you that a pothead wasn't a pothead?

Speaker 1: I mean, I would say that I've always been a bit of an ambivalent marijuana user. Okay. I love the elevation. I don't like this stupid vacation. Fair enough. Um, so as part of doing this research for the other parent, when I discovered, oh, I think if we combine these cannabinoids and these ratios, we can produce the elevation without the Stupa vacation. That was exciting to me. Go further. And then what ultimately became the product that you're talking about as far as that specific? You know, concoction. Right. So we then tested. So I made a number of educated guesses based on the peer reviewed research. Yep. And then we test it and um, I'll never forget our first lucid mood testing party where we started with the contaminant base and all of us enjoyed that high more than any we had ever had in our life.