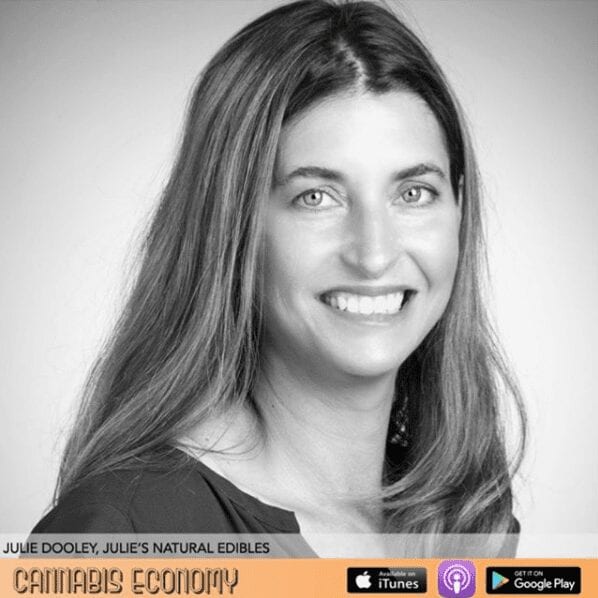 Joining us from her mother’s house in Wisconsin, Julie Dooley returns and Chickie her mother does join us at a few points throughout the discussion. As a reminder, Julie was diagnosed with celiac disease and cannabis was suggested to her as a solution. She did take cannabis and it immediately helped her with diet as well as pain management. She also had a friend in need and they both then created a company producing healthy cannabis snacks. But that was nearly a decade ago. Eight years later Julie realizes that the past has served as R&D. She’s now set to expand into multiple states. But it’s not anywhere close to easy. Julie takes us through a true understanding of what it means to be in cannabis business for yourself in 2017.

Speaker 1: Julie Dooley returns joining us from her mother's house in Wisconsin. Julie Dooley returns and shaky. Her mother does join us at a few points throughout the discussion. As a reminder, Giulia was diagnosed with celiac disease and cannabis was suggested to her as a solution. She did take cannabis and it immediately helped her with her diet as well as pain management. She also had a friend in need and they both then created a company producing healthy cannabis snacks, but that was nearly a decade ago. Eight years later, Julie realizes that the pastor served as r and d. she's now set to expand it to multiple states, but it's not anywhere close to easy. Julie takes us through a true understanding of what it means to be in cannabis business for yourself. In 2017, welcome to cannabis economy. I'm your host Seth Adler. Check us out on social with the American Academy. That's two ends of the word economy. Julie Dooley,

Speaker 4: chicky made me eggs with potatoes and Zucchini. Okay, well that sounds fantastic. And chickie, who is chicky? Chicky is my mother. I want to see. I'll show you chicken. Okay. Because we're on facetime so we can say hello. How are you? You or your daughter is wonderful. I know that. I feel. I feel like she had to have celiac because she was too perfect. It made so much better, but we blamed my mother for them. Right.

Speaker 4: Well, it's, it's hereditary. So let's, let's actually start there because you and I know each other for a long time and you were like episode. I don't know, but it's a single digit, I think. Number nine. There you go. So I, let's review and make sure that we understand, you know, how we have the pleasure of Julie Dooley and you, you, you like to say yours truly here in the cannabis industry. Right? So, you know what's, what's the old story?

Speaker 5: Yeah. God rest his soul mate. She's just shaming in that. My, my stepfather made coin that yours truly. Julie Dooley. Okay. What's going on?

Speaker 4: Well, what was the. Yeah, so you know, all the way back when, how, how did we get you here in the cannabis industry?

Speaker 5: So you're right. CELIAC was the, was the, my um, was the reason why I entered the doorway in the first place. Now going back before that though, sad to remember that I am a dad had and I got the privilege of following them around as a young girl and an older girl. And now I'm in love with John Mayor. Thank you for bringing some good dead tunes. But anyway, so the point being that cannabis was not scary to me, it was very much open to it and it wasn't like somebody told me, oh, try a try. You have Celiac, tried marijuana with that. It was just like I got diagnosed with Celiac. I was changing my diet, my entire lifestyle basically. And um, the kids, we're not babies anymore and a friend of mine grew it, so I was like, you know what, it's been so long.

Speaker 5: Let me just try it. And it was like, it was having the first hit and opposite. So when you, when you're undiagnosed CELIAC, it's really painful and egg. I always looked like I, um, I was nine months pregnant, always bloated and my house, we called me bloated Mary for years, but I, and I only weighed like 100 pounds by the time I was diagnosed. So now's a healthy. I'm adult. I'm 125. So that was really, I was really too thin. So the pain and the fact that I couldn't eat and marijuana, you know, of course it's a good for um, it's great for diet. Thank you. So, uh, first hit and all of a sudden it was like somebody had poked the balloon and it was instant and I felt wonderful and it was like, all right then add to the fact that there was a friend who also had a need.

Speaker 5: And so, you know, it's like once you have a friend who's doing it with you, it's, it's awesome. And she, so you, I've told you about kate, my cocreator, she was um, had the brain tumor removed successfully and then left with nerve damage that was kind of painful at times. So, and she needed longterm was relief. So add the fact that I was just consuming canvas on occasion as needed for Celiac. And now I had my friend who actually she needed a daily at this point, that's where we decided to create the butter, the cannabutter because we wanted something to screen. We wanted something that a parent, um, you know, could consume and the kids didn't even know what just happened there. Medicine, right? Um, so what law now actually today or two days ago, we brewed the 500th brew in the kitchen.