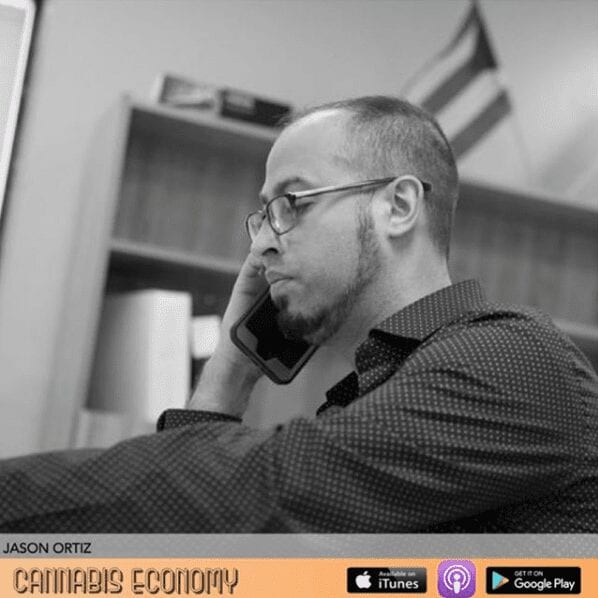 Jason Ortiz joins us in a two part discussion. First he shares what’s going on in Puerto Rico with his family and generally but he does it third hand as communications systems aren’t up. His information is from relatives of relatives who are taking days at a time to get between cities and relaying information back to family off of the island through what does work in San Juan. He provides a few suggestions of what to do if you feel like doing something. And he shares a potential timeline of recovery. In the second part of the conversation, which actually was recorded first, Jason takes us through cannabis in Puerto Rico. We discuss education and debt and generally try to get a sense of what is possible on and for the island.

Speaker 1: Jason Ortiz. Jason Ortiz drives us in a two part discussion. First, he shares what's going on in Puerto Rico with his family and generally, but he does it third hand as communication systems aren't up. His information is from relatives have relatives who are taking days at a time to get between cities and relaying information back to family off of the island through what does work in San Juan. He provides a few suggestions of what to do if you feel like doing something, any shares, a potential timeline of recovery. In the second part of the conversation, which actually was recorded first, Jason takes us through cannabis in Puerto Rico. We discussed education to debt and generally try to get a sense of what is possible on and for the island. Welcome to cannabis economy. I'm your host Seth Adler. Check us out on social with the American economy. That's two ends of the word economy. Jason Ortiz, we have to start by saying

Speaker 2: the last time we spoke, you and I, Jason, uh, was, uh, I guess happier times. Uh, so I just, um, kinda checked in with you and you said that at least your family, you know, everything's okay with you and yours a least close once, but that's certainly not the case for the whole island. Right? Is that fair?

Speaker 3: Yeah, that's definitely true. And I know my family is okay. Sort of secondhand. I haven't actually talked directly to my grandmother or my sister.

Speaker 2: Oh, okay. So then how are you communicating with them? If, if not, uh, speaking directly.

Speaker 3: Okay. Yeah, it's a really interesting thought. I mean, family members will go and contact lots of family and that respond to make sure everybody's okay back to the folks that are in the states. And so I heard from, uh, my, my cousin, that's my cousin who heard from my uncle who told me that my grandma and sister were fine. And so it's folks that are in the sun one area, but do you have like some self service or go into the other parts of the island, checking on people and then coming back and letting people know and it's usually through a system of people either in the states or through the island in Florida.

Speaker 2: Yeah. It's not a huge island, but I haven't been down there. And it's, you know, if you're in a city that isn't San Juan, it's not like it's close there, you know, there's hours and hours of driving. I would imagine that that's got to be happening,

Speaker 3: right? It's 100 miles wide. And so it's about three hours, three or four hours to drive from one side to the other. But now it could take days because the roads are closed, there's trees in the way and there's just all kinds of things going on. And so the trip back and forth is a, a trip, like you have to try to make any, may have some difficulties along the way.

Speaker 2: Right. So obviously the first and most important question is what can we do to help? Um, you know, I had gotten a, uh, the, I guess the, the, uh, the governor's wife or something is, has set up a fund in a couple of my Puerto Rican friends had given me that one and you, you have an alternative suggestion,

Speaker 3: a number of alternative suggestion is always the issue of whether or not the funds will get where they're supposed to go. And so I'm skeptical with the major government sanctioned fundraising efforts because clearly the government on both our side and the Puerto Rican government has not been a very good job so far and so I don't trust them with our dollars. Um, but I mean there's a few things trying to organization that you can relate with that shares your values. I mean I have a few Hispanic Federation is helping us here with the Connecticut Puerto Rican agenda and so you can find more information about that. I kind of kept Puerto Rican agenda Dot com. Um, but there are national org that has been pretty good about bed immediately addressing the issue and helping us with the financial aspect of it. But I encourage folks to find work that makes sense. I think there is a harm reduction organization, so there may be a number of drug policy folks that, that'd be a good fit for them for where they want to send their money, um, and send it directly to those organizations and cut out the middle man.

Speaker 3: I think that's the best way to do it. Also, don't try to donate supplies like water and different things like that because it's incredibly difficult to get anything to the island right now. And so there's warehouses full of water and supplies waiting for transportation. And so I would just use your funding directly and there's actually, I'm a young man, I forget his name at the top of my head, but there's a relief Puerto Rico and like r e l e a f three and then kind of as least male drug policy folks that are canvas industry folks that are, I believe currently there. Um, and they're also a lot, uh, you know, support.