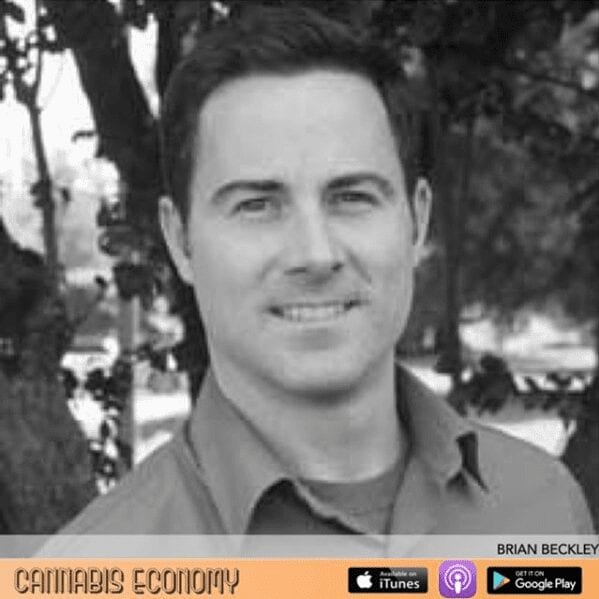 Brian Beckley joins us and shares his journalism background. His thinking is that most journalists are hired guns and back in the day due to his being in a punk band- he resisted. Brian started covering government writing for a print publication and then moved from upstate New York to Seattle and in a suburb of a suburb kept writing, eventually becoming an editor of a local weekly. After discussing his thoughts on the current and future news journalism landscape, Brian dives in on cannabis. His entry to the market was when he sat down with the publisher of Marijuana Venture and it was an instant match. Brian notes, his and the magazines focus is squarely on the business of cannabis.

Speaker 1: When you're very busy people to get a lot of events and a lot of communications, you need to be consistent. Get to that. No. His handle on any social channel pitch to Ben, Brian Beckley, Beckley joins us and shares his journalism background is thinking is that most journalists are hired guns and back in the day due to his being in a punk band, he resisted. Brian started covering government writing for a print publication and then moving from upstate New York to Seattle and in a suburb of a suburb. Kept writing eventually becoming an editor of a local weekly. After discussing his thoughts on the current and future news journalism landscape, Brian Dives in on how he got into cannabis. He sat down with the publisher of marijuana venture and it was an instant match. Brian notes that his and his magazines focus is squarely on the business of cannabis. Welcome to cannabis academy. I'm your host Seth Adler. Check us out on social with the handle can economy. That's two ends and the word economy. Brian Beckley. I am originally from Philadelphia

Speaker 2: up in upstate New York and I went to college in Albany and now I live out in Seattle. This weirdness that when I get out there now people say, you talk so fast and I think, no, I don't. I'm just got things to say exactly and I my mind, you know, goes so I have to go with it. When you talk about Philadelphia, right? You didn't spend a lot of time there are. You did. I spent time there. I grew up there until I was about six, but I had family and I went back every summer and spend a couple of months every year there. So you know the difference between Philadelphia and downstate, right? The city of New York and of course the difference between downstate New York and upstate New York. Yes. Having said all that, as you get further and further away from the northeast, we all come the same thing.

Speaker 2: Don't. It's amazing when I tell people I'm from New York and they're like really? From Brooklyn or the city, right? Oh Man. It's a big state. There's, there's other places, lots of places. So let's start with the buffalo bills, what's not, and we'll take it from there. They're the only actual New York football team though. So that's the only ones that play in New York, not the New Jersey giants. What are the New Jersey jets? That's exactly. So you're proving your northeast and New York state bone. A fee days? Yes. So how long did you spend in upstate New York? I moved to upstate New York. Uh, my family and I moved there when I was six and I went all the way through school and I graduated from Albany, Suny Albany in 98. And I'm state. Oh Wow. Yeah. Okay. And then I moved to Seattle in 2002 when the girl I was with at a time got a job offer out there.

Speaker 2: We're going to get to that. You graduating Albany in 1998 means that you almost certainly know some of my friends which will do after this. Okay. But uh, what was your major? I was a history major with a minor in journalism. Well, so you did have journalism? I did. Alright. And history is also kind of writing and reading and kind of thinking very much so and very much in the research and the interviewing of people to get the facts that you need and going to the right places to look for it. Yeah. So that all is interlinked. Yes. When did you realize that something like that, that kind of composite thing, which by the way, my sister history major journalism minor. Same deal. Um, when did you see that pathway for yourself? Well, it's funny, I went to college, uh, I've always been something of an academic and intellectual.

Speaker 2: So I went to college to study history. Or You just wanted to learn? Yes, I went, I went for the learning experience. They say people change their major six times. Sure. I did. And it was once I changed what I was going to do with it six times. Got It. So I went originally prelaw and realized that that was not the track for me. And then I was in the education track for a while to be a teacher and I realized that was probably not for me either. And a journalism came up as I made a list of things I was good at and the only thing I've ever been good at his school and I thought to myself, what is that? What you go somewhere, you listen to what someone says, you take notes, you go home and you write a paper. A light bulb went off and I thought that's what a journalist does because you tried it with education and you're like, I'll just do school the whole time.