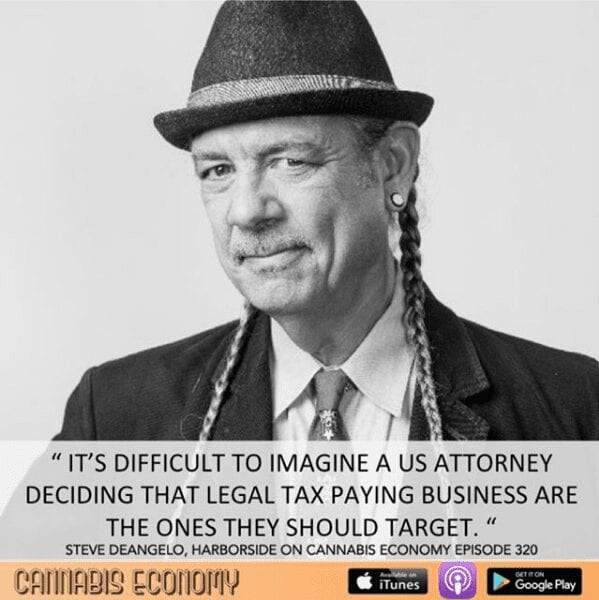 Steve DeAngelo returns to discuss California since new regulations went into effect on January 1st, and his thoughts on the rescission of the Cole Memos which happened January 4th. Steve does commend the Bureau of Cannabis Control for hitting the 1/1 date as it did go more smoothly than he expected. That said, Steve notes that the real hard work happens now- between 1/1 and 7/1 as July 1st is the set date for temporary regulations and licenses to end and the new reality to begin. On the rescission of the Cole & Ogden Memos, Steve says he wasn’t surprised. But he says that a key part of any US Attorney’s job is to survey the totality of lawbreaking that’s happening in their district and identify that lawbreaking which is the greatest public safety threat and focus on it.

Speaker 2: Steve de Angelo returns to discuss California since new regulations went into effect on January first and his thoughts on the rescission of the coal memos, which happened January fourth. Steve does come in the bureau of cannabis control for hitting the one slash one date as it did go more smoothly than they expected. That said, he notes that the real hard work happens now between one one and seven, one s July first is a set date for temporary regulations in licenses to end and the new reality to begin on, the rescission of the call and Ogden memo, Steve says he wasn't surprised, but notes that a key part of any US attorney's job is to surveyed the totality of law breaking that's happening in their district and identify that law breaking, which is the greatest public safety threat. And focus on it. Welcome to cannabis economy. I'm your host Seth Adler. Check us out on social with the Hana can economy. That's two ends of the word economy. Steve D'angelo,

Speaker 1: I've just been through. Alright, so harborside dispensary's. Now there's other flourish. Yes. What about two years ago we started extending out along the supply chain, right? So we have a cultivation facility and the beautiful Salinas Valley where we're producing a clean green, not organic, but clean green, clean green has decide free cannabis. Got It. And Oh, and we've begun a manufacturing that output into some branded products which are available in our dispensary's now will be available in dispensaries throughout the state and the next few weeks just in time for January first for, you know, this whole new world. Right. So you would have then had to apply for all of the licenses. Right? We have, we have, uh, we have applied for and received at this point. We've applied for I think north of 20 licenses total problem and we've received most of them thus far. So yeah, we uh, are now cultivation, manufacturing, retail and distribution license.

Speaker 1: Excellent. Okay. And just as far as that process, how did this all go? Because we spoke, you know, months and even years in advance of January first 2018 of what was happening and how it was all coming together. So kind of from December 30, first to January, first to January second. In your opinion, how did that all go? You know, as far as, uh, being smooth or otherwise? I, you know, I really, I have to commend the bureau of Cannabis Control and California for hitting that one, one date, quite frankly. I thought they were going to push it back and I think given the amount of time that they had that it went more smoothly than I would've expected it to go. And, uh, and, and it's, it's, it's, it's, it's, it's a totally new world for us. So, uh, there's a, there's a lot of things that we can't do that we used to do, a lot of things that we have to do that we didn't ever do before.

Speaker 1: I'm a huge changes in our policies and procedures in the customer experience and the ways that we package and track a and receive and transport cannabis. Uh, but I'll tell you the moment when that clock hits 6:00 on one one, and I did the first sale of cannabis to my attorney Henry White, who's the guy that's really responsible that were existed to this day through the federal assault, right? The Lion, the lion of San Francisco. It was possibly the single most joyous moment of my life. And right after I made that sale, uh, I watched the 300 plus people who had been lined up outside waiting for the moment. You come in and, you know, human beings have a lot of different ways of expressing happiness. And sometimes they're like thrilled. And you know, sometimes they're like lustful, sometimes they're intoxicated, right? This was just the most amazing looks of pure joy on people's faces.

Speaker 1: You could see years and years of the weight of stigma in law being lifted off of people's shoulders and that they were tasting this, this taste of freedom that they had never tasted before in their lives. And everybody felt so good. It was just such a beautiful moment. I'll, I'll, uh, try to make it even more beautiful for you in your mind by asking if, if Jack was kind of standing in the corner, Jack or what, what might he have said at 6:00 on one one? Oh, Jack was right there dancing on my shoulder. Uh, there was a whole army of angels that dancing on my shoulder on that morning. And, and they still are, um, uh, you know, we are seeing now the cannabis renaissance spread across this globe in, in, in, at the speed at which we always hoped and thought that it should finally, it's happening.