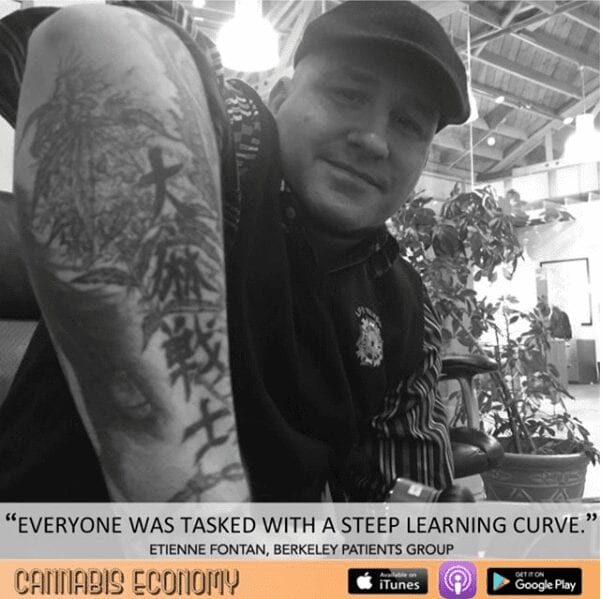 Speaker 1: Etienne Fontanne returns to share what's happening on the ground in California since January first. He notes at Berkeley patients group has been testing for more than a decade and otherwise self regulating for 18 years, as has always been the case in the interim period between temporary regulations rolled out one, one and full regulations rolling out seven, one at 10 and bpg or focused on what they've always been focused on staying as compliant as possible. He notes that there's been a bit of sticker shock for the patient consumer in that city, county and state tax have been added to product prices which have gone up, and so he's hopeful that at least at the city level, there's an easing of taxes for consumers. Something echoed by Aaron Justis and Steve de Angelo in the two episodes which precede this one. Welcome to cannabis economy. I'm your host Seth Adler. Check us out on social with the American economy. That's two ends of the word economy at 10. Fontanne Roger will know at 10 Fontana.

Speaker 2: That's my name. Yeah, we are here. We have so many things to talk about at 10. One is you and how you're doing and make. We want to make sure to to know about that. The other is January first happened and so we are in a different reality here in California and then just a few days later, jeff sessions rescinded the coal memos in the Ogden memo before. It's. So we're gonna want to talk about that? How does that line up as far as things to talk about? So much fun. I cannot wait to tackle it all. Well, let's do, you know, California here we are adult use, you know, a whole new world. Brave new world of cannabis here in California of course, looking to what Colorado and Washington and Oregon and Alaska have done have allowed a bureau

Speaker 3: of cannabis control to a. They came through with emergency provisions, I would say about a month before. Right? And so, um, everybody was tasked with a steep learning curve. So from my legal team to I'm government relations people, everyone across the board, we actually spoke to Sabrina. I saw that. And so it's a absorbing, you know, um, because what we have been doing and self-regulating here at Berkeley patients group, um, you know, from being pioneers and testing back in 2006, 2007, I'm coming online with that type of testing to where the city decided that the other dispensary, he's had to hold up to the same standards. Now the state is holding everybody to the same standards that we've been self holding ourselves up to. And it's nice to see everybody else come along for the ride because unfortunately those things that have failed in testing my competition is taking them around or to absorb them because they don't have the same testing standards that Berkeley has enacted.

Speaker 3: A Berkeley was the most strict in enacting a testing. And in fact, to my knowledge is the only one initially that has a testing still on the books for all of its dispensary. So we've been forced into going into the realm of having all of our cannabis tested, storing that and dealing with the, um, the realities that come with holding cannabis for an extended period of time. Right now it is, the onus has changed, the dynamic has completely changed, whereas in the fat in the past, I dealt directly with the farmer, now I'm dealing with the distributor, whereas the farmer and I had to negotiate. Now it is completely, the onus is on the grower to do the testing to make sure that it is packaged properly. Uh, and uh, coming in July first, they will actually have to be in a childproof packaging.